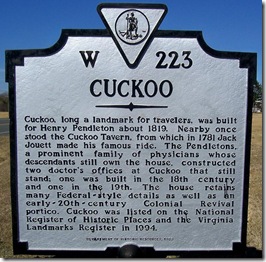 Marker Text: Cuckoo, long a landmark for travelers, was built for Henry Pendleton about 1819. Nearby once stood the Cuckoo Tavern, from which in 1781 Jack Jouett made his famous ride. The Pendletons, a prominent family of physicians whose descendants still own the house, constructed two doctor's offices at Cuckoo that still stand; one was built in the 18th century and one in the 19th. The house retains many Federal-style details as well as an early-20th-century Colonial Revival portico. Cuckoo was listed on the National Register of Historic Places and the Virginia Landmarks Register in 1994.

Location: On Route 33 near intersection with Route 522 in Cuckoo. Marker is grouped with marker W-213 (Jack Jouett's Ride). Erected by the Department of Historic Resources in 1996.

Today, I am starting as series of blog posts about eight historical markers related to a often overlooked historical event during the American Revolution. A few years ago I decided to drive U.S. Route 33 while traveling back home from Williamsburg, VA. I came across two markers in the little village of Cuckoo, VA. What I discovered was the story of Jack Jouett. Next to this marker about “Cuckoo” was a marker titled, “Jack Jouett's Ride.” I had never heard of Jack Jouett and about his night time ride 40 miles to Charlottesville, VA to warn the Virginia state legislative that the British were coming.

Until I came across this, I don't ever remember hearing this story about Jack Jouett which begin here in Cuckoo. In school, we have all heard of the story of Paul Revere and his ride to warn the colonists about the approaching British at the beginning of the American Revolution. Unless you grew up in this part of Virginia where the story is told within the local schools, most of us have probably never heard of Jack Jouett and his ride in the closing months of the American Revolutionary War in 1781. 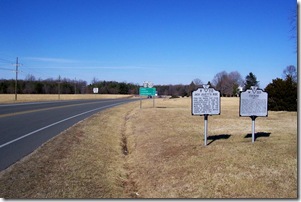 Photo taken looking north on Route 522 and west on Route 33.  Click any photo to enlarge.

In Cuckoo, VA there are two state historical markers, today's called “Cuckoo” deals chiefly about the village and the Pendleton family who were a family of physicians and the marker titled, “Jack Jouett's Ride,” which I will post tomorrow. The village of Cuckoo is directly east of Charlottesville and eight miles southeast of Lousia, VA on U.S. Route 33.

Before the Pendleton's built the home pictured here in Cuckoo, there was a tavern nearby called “Cuckoo Tavern” where it is reported Jack Jouett's adventure began. Legend has it that the name Cuckoo came from a cuckoo clock that was in the tavern and the first such clock in this part of Virginia. While other sources state, it was not unusual for taverns to be named for animals, particularly birds. This might be the case, since Jack Jouett's father once owned Cuckoo Tavern and later owned another tavern in Charlottesville, VA called Swan Tavern. I will get into the details about Jack's ride tomorrow, but we will first deal with the marker called Cuckoo.

The Pendleton home also called “Cuckoo” was built about 1819 for Henry Pendleton. The house is a prominent landmark along U.S. Route 33 in Louisa County, where the road intersects with U.S. Route 522 at this point. The two level portico, four chimneys, and unusual one-story semicircular closet tucked between two of the chimneys are notable features of the house. Standing in the yard is a small frame building that served as a doctor's office and guest house. Just north of the house is a second doctor's office, built around 1888 and moved to this site from across the road in 1972 when the highway was widened. It continued to be used as a doctor's office until 1979. 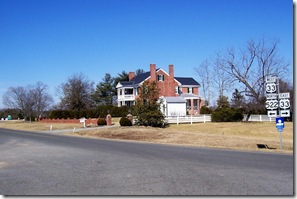 The Pendleton home “Cuckoo” at the intersection of Routes 33 & 522.  House was heavily damaged by earthquake last year. Marker on far left of the photo.

Henry Pendleton, the first of the Pendletons to own Cuckoo, purchased the land from the estate of William Callis in 1818 and tax records indicate he built the original section of the house about 1819. Henry's father, John Pendleton, was the older brother of Edmund Pendleton the famous statesman and jurist. His mother was Sarah Madison, sister of President James Madison. John Pendleton had moved to Hanover County in 1770 where he was elected a member of the House of Delegates.

Henry, like many younger sons in Hanover, moved further west into Louisa County where he was living when his oldest son, Edmund, was born in 1786. In Louisa County, Henry Pendleton was a militia officer, overseer of the poor, and served in the General Assembly from 1804 to 1806. At his death in 1822, he left a comfortable estate including 226 acres in the Cuckoo tract, three other parcels of land in Louisa, and eighteen slaves.'

Eleven physicians, most of whom practiced in Louisa County, VA and four here at Cuckoo can trace their roots to Henry Pendleton. Early doctors were not specialists but cared for the medical needs of both young and old in the community. They performed minor surgery, set broken bones, and delivered babies, in addition to treating a wide range of illnesses. Treatment was limited, however, as there were few effective cures. Diseases such as pneumonia, typhoid, and whooping cough were common killers.' 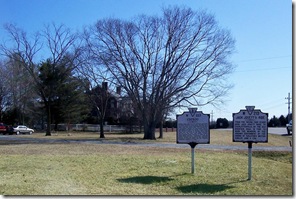 View of marker looking toward intersections of Route 33 & 522 with the Pendleton home behind the trees.

Dr. E. Barbour Pendleton, who practiced medicine at Cuckoo from 1908 to 1979, in an interview given at about the time of his retirement in his 90's, spoke of the dangers of pneumonia and typhoid fever and his frustration at the lack of effective treatments until penicillin and antibiotics became available. He also noted that typhoid was greatly dreaded, "because you were supposed to see your patient maybe every day or every other day and you were on horseback."

Until improvements in transportation and the arrival of the automobile made travel to the see a doctor more widely available, most physicians went to their patients homes while also having a small office. Doctors traveled on foot, horseback, and by buggy to visit their patients. It was not until the mid and late nineteenth century that separate buildings were constructed for rural doctor's offices. Like lawyers' offices, they usually stood in a corner of the doctor's home, but few survive today. At Cuckoo there are two.

During last year's earthquake and after shock quakes in Lousia County, VA, the Cuckoo house was badly damaged with the four chimney's falling down. According to newspaper reports I read it will cost about $800,000 to restore the house. A link to a photo of the house about 100 years ago.

This work is licensed under a Creative Commons Attribution No Derivatives license.
Little Bits of History at 9:00 AM
Share