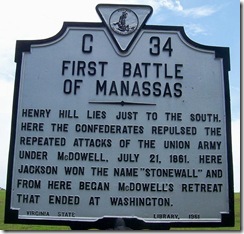 Marker Text: Henry Hill lies just to the south. Here the Confederates repulsed the repeated attacks of the Union army under McDowell, July 21, 1861. Here Jackson won the name "Stonewall," and from here began McDowell's retreat that ended at Washington. 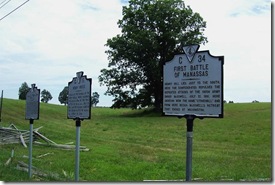 Several state historical markers have the title, “First Battle of Manassas” and each tells you a little bit about the battle as it transpired at given location. It is difficult to completely understand the battle actions for the day simply by reading the markers, but each marker puts you approximately in the location where the actions described occurred. I recently saw on television about a smartphone app that you can download at the visitor's center at Manassas that can help you experience the battlefield in a way not experienced before and the app is free. Today's marker tells about Henry Hill where a great deal of the action of the battle occurred. The two armies crossed the road next to this marker, back and forth between Henry Hill and Matthews Hill as the fortunes of each army developed during the course of the battle. 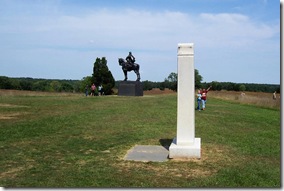 This photo is at the top ridge of Henry Hill, next to the visitor’s center where the statue of “Stonewall” Jackson is located. The monument to Barnard Bee is in the foreground, (close-up below) Jackson’s men would have been positioned along the ridge to the right.

It was here on Henry Hill that General Thomas Jackson's brigade was position to the east of today's visitors center for National Park Service. Here on Henry Hill is where Jackson received his nickname “Stonewall” that he is more commonly known. Henry Hill is to the south of this marker. 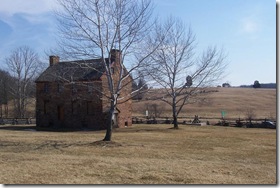 This photo is looking toward Henry Hill in the background from behind the Stone House located a the intersection of the Warrenton Turnpike and Sudley Road.

After the Union troops crossed Bull Run at Sudley Ford, north of this position and Evan's delayed the Union advance later with the assistance of Bee and Bartow's commands. Being outnumbered by the Union forces, the confederates retreated to the top of Henry Hill. On the far side of Henry Hill, the remnants of Evans's and Bee's and Bartow's commands took refuge. However, they had bought time for reinforcements to arrive, and now fresh troops started coming. First came Colonel Wade Hampton and the infantry of his South Carolina legion - a unit with infantry, cavalry, and artillery all in one. He went into line on the right of the Confederate front, his men still panting from having just arrived on a train from Richmond and then run to the front, and from the Warrenton turnpike to cover the withdrawal of the Confederates across Young's Branch, where this marker is approximately located. 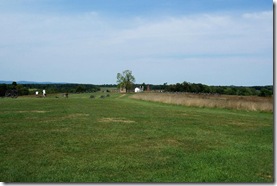 This photo is the view from Jackson’s position on Henry Hill looking toward the Henry House and Matthews Hill in the background, where a great deal of the fighting occurred.

General Thomas Jackson's troops arrived. Jackson had his men up at 4 a.m. that morning, expecting to reinforce Longstreet at Blackburn's Ford. Jackson heard that morning the firing off to his left at the stone bridge. Like Bee and Bartow before him, he did not wait for orders, but assuming the battle to be there, he instantly put his brigade in motion. By about 11:30 he approached the scene of action and moved up the back slope of Henry Hill. Once on the crest, he put his five Virginia regiments in line just behind the summit, informed Bee of his arrival, and told his men to lie down and await either the attack of the enemy or instructions from Johnston. 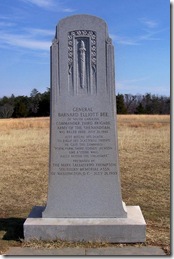 Here a legend was born, Alabamians led by Brigadier General Barnard E. Bee rode to Jackson when he heard of his arrival.
"General," Bee cried, "they are beating us back."
"Sir, we'll give them the bayonet," Jackson calmly replied.

Bee seems to have regarded the bayonet comment as an order and at this point on the battlefield confusion was pervasive. Disoriented, Bee did not even recognize some of his own men at first. Told at last who they were, he shouted, "This is all of my brigade that I can find - will you follow me back to where the firing is going on?" They said they would, and he led them back into the inferno. But before doing so, he almost certainly said something else, but none present ever agreed on precisely what it was. A few days later a newspaperman said he was told that Bee cried out, "There is Jackson standing like a stone wall. Let us determine to die here, and we will conquer." A few days more, and people in Richmond spoke of Jackson's men being so staunch under fire that "they are called a stone wall." Thus was born "Stonewall" Jackson. 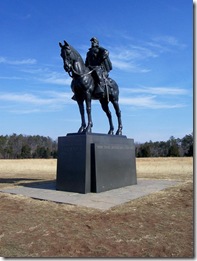 Statue of “Stonewall” Jackson on the ridge of Henry Hill where his troops would have been positioned.

Yet no one knows for certain what Bee said, because later Bee was mortally wounded and died on the field. The remark seems like testimony to Jackson's firmness under fire, but at the time Bee said it, Jackson had not yet become engaged and had his men lying down behind the crest. Others thought it might not be a compliment at all, but rather a snide comment to the effect that while Bee's men were being killed in the middle of the battle, Jackson kept his command out of the fight, immovable like a stone wall. Whatever the case, Jackson would be called "Stonewall" for the rest of time.

This work is licensed under a Creative Commons Attribution No Derivatives license.
Posted by Little Bits of History at 9:41 AM