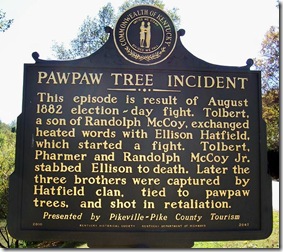 Location: Near Buskirk, KY State Highway 1056 about 3/4 of a mile from the West Virginia/Kentucky border from Matewan, WV. Erected by the Kentucky Historical Society, Kentucky Department of Highways in 2000. 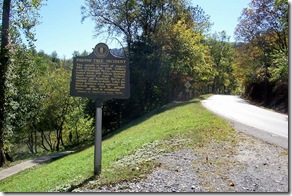 Photo taken looking south on KY Route 1056, road north goes to Matewan, WV only about a mile away. Click any photo to enlarge.

According to most historical accounts, the significant turning point in the feud occurred during the Election Fight in August 1882. Three of Randolph McCoy’s sons ended up in a violent dispute with two brothers of Devil Anse. During the chaos of the fight one of the McCoy brothers stabbed Ellison Hatfield multiple times and then shot him in the back. Authorities in Kentucky soon apprehended the McCoy’s, but the Hatfield’s interceded, spiriting the men to Hatfield territory in West Virginia. 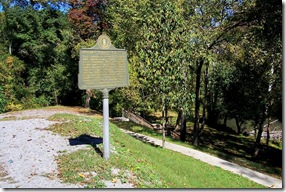 Both Randolph and Sarah McCoy attempted to intervene and ask the Hatfield’s to release their sons and let them stand trial for the crime in Kentucky. Devil Anse Hatfield said he would hold them until he found out whether Ellison would live or die. He indicated that if Ellison died the McCoy brothers fate would be similar. Due to the pleas of their mother, Sarah McCoy, Devil Anse stated he would guarantee that the brothers would be returned to Kentucky alive.

On August 9, 1882, news came that Ellison Hatfield was dead. The three McCoy boys were marched off to Kentucky. They crossed the Tug River at Matewan, WV to the Kentucky side in the general location of this marker. There the Hatfield posse bound the McCoy’s to some pawpaw trees. In the space of a few seconds some 50 shots were fired into the brothers. Devil Anse Hatfield had kept his promise to bring the boys back to Kentucky alive. These murders were brought to the attention of the Kentucky Governor who appointed a special officer, Frank Phillips, to arrest the murderers of the McCoy brothers. 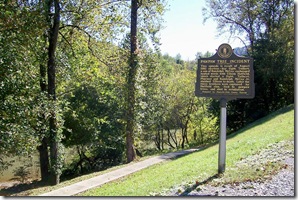 On the left of the photo you can see the Tug River with West Virginia on the other side.  Some reports indicated the Hatfield’s tied the McCoy brothers to the Pawpaw trees on Kentucky side and crossed to WV and shot them from the WV side of the river.  I find this a little difficult to believe since it was done at night, but that is how legends and myths grow.

Though the Hatfield’s might have felt their revenge was warranted, the law felt otherwise, quickly returning indictments against 20 men, including Devil Anse and his sons. Despite the charges, the Hatfield’s eluded arrest, leaving the McCoy’s boiling with anger about the murders and outraged knowing the Hatfield’s walked free. Their cause was taken up by Perry Cline, an attorney who was married to Martha McCoy, the widow of Randolph’s brother Asa Harmon. Years earlier Cline had lost a lawsuit against Devil Anse over the deed for thousands of acres of land, and many historians believe this left him looking for his own form of revenge. Using his political connections, Cline had the charges against the Hatfield’s reinstated. He announced rewards for the arrest of the Hatfield’s, including Devil Anse.

He also offered a large reward that unleashed an army of bounty hunters in the state of West Virginia. This angered the West Virginia Governor so much, some thought there was going to be a civil war between the two states.

This work is licensed under a Creative Commons Attribution No Derivatives license.
Posted by Little Bits of History at 4:00 PM