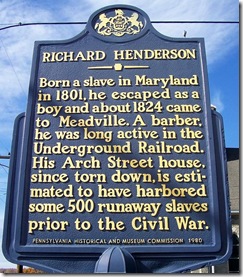 Marker Text: Born a slave in Maryland in 1801, he escaped as a boy and about 1824 came to Meadville. A barber, he was long active in the Underground Railroad. His Arch Street house, since torn down, is estimated to have harbored some 500 runaway slaves prior to the Civil War.

Location: At the corner of Liberty and Arch Streets, next to Bethel AME Church, Meadville, PA.  Erected by the Pennsylvania Historical and Museum Commission in 1980.

When the Richard Henderson marker above was approved in 1980, it represented only the third time a African American Pennsylvanian had been honored by a state historical marker. 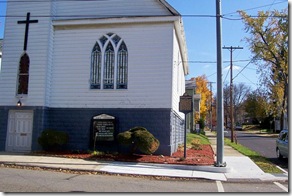 Bethel A.M.E. Church is on the left of the marker and faces Liberty Street, Arch Street is on the right. Click any photo to enlarge.

According to Meadville tradition, Richard Henderson was the first permanent black resident of Meadville. Richard had escaped from slavery at the age of 15 with his two brothers and a sister. The brothers survived, but the sister died after catching pneumonia during the journey. One of the Henderson brothers continued north to Canada. The other two, Richard and Robert, established a barbershop in town.

Richard Henderson's residence was located near this marker according to a 1875 Meadville map his home would have been across the street from the church about three houses east of the church on Arch Street. His home operated as a station along the Underground Railroad and is estimated to have aided some 500 runaway slaves. 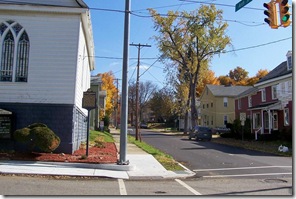 Arch Street is on the right and according to 1875 map, Henderson’s home would have been located approximately where the yellow house is across from the church in the photo.

While his brother Robert eventually left to establish his own barbershop in nearby Brookville, Richard remained in Meadville. There, he was a leader in the local Underground Railroad network from the 1830s to the 1860s. Abolitionist John Brown lived north of Meadville until 1835 and did came to Meadville often. He helped to establish other stations for the Underground Railroad in the surrounding area. Though I did not find any specific evidence of a connection and it is very likely that John Brown and Richard Henderson knew each other in regard to Underground Railroad operations and may have learned from each other.

Richard Henderson was a prominent member of the African American community, where he helped to form Meadville's Bethel A.M.E. Church in 1849 (where this marker is located) and served as an early trustee. Richard Henderson married twice. His second wife, Mary, was born in Erie, PA in 1821. Together they raised two sons, Edward and Lincoln. Edward Henderson recalled that he saw his parents provided shelter and a hiding place in their home for as many as twenty fugitives at a time. Richard Henderson died in 1880 at the age of 79 and is buried in Meadville.

This work is licensed under a Creative Commons Attribution No Derivatives license.
Posted by Little Bits of History at 2:00 PM