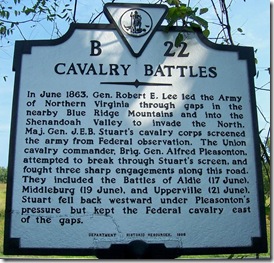 Loudoun County, VA
Marker No. B-22

Marker Text: In June 1863, Gen. Robert E. Lee led the Army of Northern Virginia through gaps in the nearby Blue Ridge Mountains and into the Shenandoah Valley to invade the North. Maj. Gen. J. E. B. Stuart's cavalry corps screened the army from Federal observation. The Union cavalry commander, Brig. Gen. Alfred Pleasonton, attempted to break through Stuart's screen, and fought three sharp engagements along this road. They included the Battles of Aldie (17 June), Middleburg (19 June), and Upperville (21 June). Stuart fell back westward under Pleasonton's pressure but kept the Federal cavalry east of the gaps.

Location: On Route 50 (John Mosby Highway), 2.59 miles west of Route 15 (James Monroe Highway), just east of Champe Ford Lane. Group with three other markers, B-30 (Stuart and Bayard); B-33 (A Revolutionary War Hero); B-32 (Gettysburg Campaign). Erected by the Department of Historic Resources in 1998. 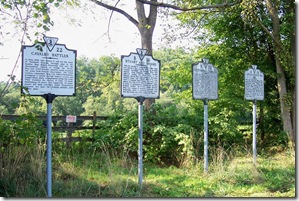 Marker is on the far left of the photo.  Click any photo to enlarge.

This marker is a companion marker at the same location to my last post called Gettysburg Campaign, Marker B-32. This marker speaks specifically to the three cavalry battles which occurred along current day U.S. Route 50. In Upperville, where the third and largest of the three cavalry battles. Along Route 50, there are several Civil War markers telling about the locations of the battles. In Upperville, a visitor today can still get a view of the battle area from the Civil War marker, I photographed below and the marker text tells the story of Upperville.

The photo of the background behind this marker in Upperville gives you a view of where the battle would have occurred in 1863. 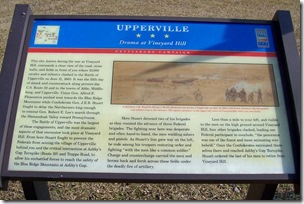 Marker Text: This site, known during the war as Vineyard Hill, commands a clear view of the road, stone walls, and fields in front of you where 10,000 cavalry and infantry clashed in the Battle of Upperville on June 21, 1863. It was the fifth day of attack and counterattack along present-day U.S. Route 50 and in the towns of Aldie, Middleburg, and Upperville. Union Gen. Alfred E. Pleasonton pushed west towards the Blue Ridge Mountains while Confederate Gen. J.E.B. Stuart fought to delay the Northerners long enough to conceal Gen. Robert E. Lee’s march through the Shenandoah Valley toward Pennsylvania.

The Battle of Upperville was the largest of these engagements, and the most dramatic aspects of that encounter took place at Vineyard Hill. From here Stuart fought to prevent the Federals from seizing the village of Upperville behind you and the critical intersection at Ashby’s Gap Turnpike (Route 50) and Trappe Road, to allow his embattled forces to reach the safety of the Blue Ridge Mountains at Ashby’s Gap. 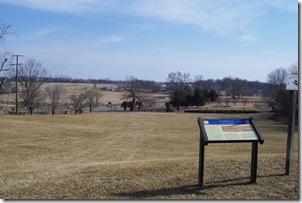 View behind the Civil War Trails marker is a view of Upperville looking east toward Washington, D.C. Route 50 is the road in the background.

Here Stuart directed two of his brigades as they resisted the advance of three Federal brigades. The fighting near here was desperate and often hand-to-hand, the men wielding sabers and pistols. As Stuart’s line gave way on the left, he rode among his troopers restoring order and fighting “with the men like a common soldier.” Charge and countercharge carried the men and horses back and forth across these fields under the deadly fire of artillery.

Less than a mile to your left, and visible to the men on the high ground around Vineyard Hill, four other brigades clashed, leading one Federal participant to conclude, “the panorama was one of the finest and most animating ever beheld.” Once the Confederates extracted themselves there and reached Ashby’s Gap Turnpike, Stuart ordered the last of his men to retire from Vineyard Hill.  (End of text)

J.E.B. Stuart’s cavalrymen did their job, holding the Union troops long enough for Lee to move his Army across the Potomac into Maryland undetected, only to collide with the Union Army two weeks later at Gettysburg.

This work is licensed under a Creative Commons Attribution No Derivatives license.
Posted by Little Bits of History at 7:00 AM