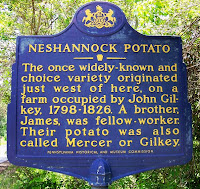 Marker Text: The once widely-known and choice variety originated just west of here , on a farm occupied by John Gilkey, 1798-1826. A brother, James, was fellow-worker. Their potato was also called Mercer or Gilkey.

What is fascinating about historical road markers is that they cover a variety of topics, from people, places and things to even vegetables. In 1797, Irish immigrant John Gilkey settled in Lawrence County, Pennsylvania and cultivated the Neshannock Potato, a new variety of potato achieved wide popularity in the nineteenth century. Like apples, potatoes were critical to the survival of farmers and their families. Spuds kept well over the winter months and were vitamin packed. They also figured prominently in crop rotation schemes and were used as animal feed for cattle and pigs.

Settling on a farm in present-day Washington Township, Lawrence County, Gilkey planted three different varieties of potatoes - blue, red, and white. Within a few years of his arrival, these three varieties had cross-pollinated. When Gilkey planted the seed potatoes he collected they produced a new type of potato that he named "Neshannock," after a nearby creek. The Neshannock was a large and long potato, reddish purple in color, with streaks of the same color through the flesh that generally disappeared after the potato was cooked.

Gilkey and his brother gave seed potatoes to friends and neighbors. Soon farmers in nearby counties also were growing them, for they quickly found that the Neshannock was more productive than older varieties, and of good quality in flavor and size. 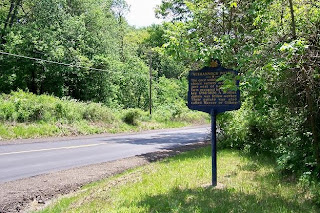 In the decades that followed, cultivation of the new potato spread quickly to farmers in the Middle Atlantic states, and then across the country. In the 1830s, a farmer named Titus Bronson introduced them to Michigan and claimed that he raised 700 bushels on a single acre of ground on his farm near present-day Kalamazoo. By the 1870s, farmers in Idaho and Utah also were raising them and shipping them by rail to California.

By then the Neshannock was being marketed as the Gilkey, Mercer, Neshannock, Shannock, or the Shenango. Multiple names might have been confusing to some, but farmers and consumers alike were able to recognize the Neshannock by its distinctive features. In 1843, the highly respected farmer's journal The Cultivator stated that this spud was "one of the most valuable of table potatoes, white, mealy and of good flavor." In the nineteenth century, the Neshannock became the standard commercial potato in the United States. A very productive and an excellent all-purpose potato, it was prized for its size, wonderful flavor, and ability to keep.

With the introduction of new, more productive varieties in the late nineteenth century, the Neshannock gradually fell out of favor. But for much of the 1800s, Pennsylvania's Neshannock potato helped to feed the nation.

Posted by Little Bits of History at 8:10 PM