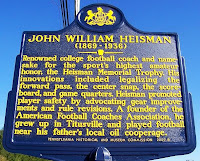 Marker Text: Renowned college football coach and name-sake for the sport’s highest amateur honor, the Heisman Memorial Trophy. His innovations included legalizing the forward pass, the center snap, the scoreboard, and game quarters. Heisman promoted player safety by advocating gear improvements and rule revisions. A founder of the American Football Coaches Association, he grew up in Titusville and played football near his father’s local oil cooperage.


Location: Next to the Titusville High School, Carter's Field, at the intersection of Central Ave. and Brown St. in Titusville, PA.


This is a new marker erected this year as part of the 150 year anniversary of Drake's Well located along North Central street next to the high school football field in Titusville, PA. When we think of Titusville, generally people think of the discovery of modern oil drilling by Edwin Drake. Oil production in this area of Pennsylvania around Titusville had an impact in a number of different ways resulting from oil production. One example were the families that moved to Titusville as a result of oil, such as, Michael Heisman who moved his family from Cleveland. His trade as a cooper brought him to built wooden oil barrels used to move the oil that brought wealth and prosperity to the region.

His son, John William Heisman was raised and attended schools in Titusville, graduating from Titusville High School in 1887 as a baseball player, football player, and star gymnast on his squad. Born Johann Wilhelm Heisman on October 23, 1869, in Cleveland, Ohio, he was the son of John M. Heisman and Sara Lehr. The name John William was later adopted in order to make less apparent the fact that he was the son of immigrants. He learned to play football in Titusville and went on to become one of the greatest collegiate football coaches. Each December, America waits to hear who will receive the Heisman Memorial Trophy, one of the most coveted awards in sports.

John Heisman entered Brown University where he gave up other activities to pursue the sport of football as a lineman. Due to Brown’s lack of funding, football was relegated to a club sport unworthy of intercollegiate competition. This setback led to Heisman’s transfer to the University of Pennsylvania where he played for two more years and graduated with a degree in law. 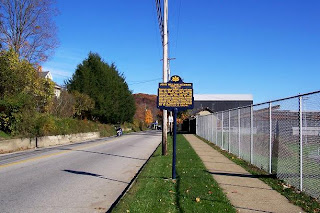 Heisman decided to not pursue a law career, but accepted an offer to coach football at Oberlin College. Football at the time of Heisman was quite different than the football we think of today, while coach, Heisman also played defensive end on his own football team, a practice that is no longer legal in collegiate sports. Heisman went on to coach at Buchtel College (now the University of Akron), Alabama Polytechnic Institute (now Auburn University), Clemson University and eventually to Georgia Tech where he had his longest tenure as a coach. He coached football at eight different colleges and universities between 1892 and 1927.

During his time at Georgia Tech, Heisman was at the frontline of many changes in the sport. In 1906, the forward pass was legalized, a cause for which Heisman had lobbied for since 1900. In 1908 and 1910, he was named the director of the Atlanta Athletic Association and the president of the Atlanta Baseball Association, respectively. In 1910, he helped champion the change of football game timing from a two half model to its present four quarter setup.

After 16 years, Heisman ended his tenure at Georgia Tech due to his divorce. He returned as a coach for the University of Pennsylvania. In 1922, Heisman authored his only book, Principles of Football. Written as a reference text for football players, the book contains many blank pages for note taking throughout the chapters. He was named president of the American Football Coaches Association for two consecutive terms while coaching at Washington and Jefferson in Washington, Pennsylvania and Rice University.

Heisman remarried in 1924 and three years later resigned as Rice's coach. The couple moved to New York City where he authored a sports column for Collier’s magazine and became the director of the New York Downtown Athletic Club (DAC).

As director of the DAC, John traveled to Chicago and Detroit to research other successful athletic organizations. His research led to the founding of the DAC’s Touchdown Club. This group began offering a trophy for the best college football player in the Eastern states. By 1935, the award had become national.

John Heisman died after suffering from a short illness in 1936. When the DAC gave their second trophy two months after his death, it was renamed the Heisman Memorial Trophy, which it remains today. He died in New York City, but was buried in his wife’s hometown of Rhinelander, Wisconsin

Posted by Little Bits of History at 11:37 AM