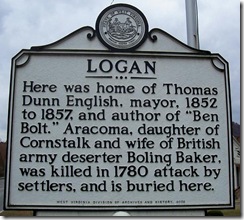 Marker Text: Here was home of Thomas Dunn English, mayor, 1852 to 1857, and author of "Ben Bolt". Aracoma, daughter of Cornstalk and the wife of Bolling Baker, the white, renegade, was killed when settlers and Indians fought. She is buried here.

Location: WV Route 10 (Logan Boulevard), close to intersection with Holland Lane and Main Street in the town of Logan near downtown area in front of the DMV. Erected by West Virginia Division of Archives and History in 2002.

The town of Logan, WV is in the center of the coal mining region of southern West Virginia. In the center of town is this historical marker on the surface it may not catch your attention, but the information will lead you to a much more interesting story. Thomas Dunn English lived in Logan from 1852 to 1857 coming from New York and he was a man of many occupations. He was a physician, lawyer, poet, playwright, novelist, journalist, and politician. He came to Logan to practice as a physician during a time in Logan history when getting to Logan was not an easy task. In 1852, traveling to Logan required a horse back ride over some tough terrain over some difficult mountain paths. Logan was not readily accessible until about 1904 when the railroad was extended from Huntington, WV in order to permit the removal of coal. I could not find out why English decided to come to Logan of all the places he could have gone to practice medicine. 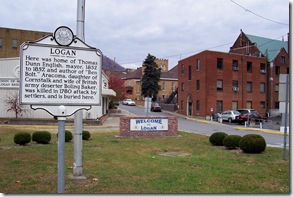 Thomas Dunn English was born in Philadelphia on June 29, 1810. English graduated from the medical department of the University of Pennsylvania in 1839, and then studied law and was admitted to the Philadelphia bar in 1842. English moved to New York and edited a daily paper. He continued to write but decided to move to Virginia, in what is now Logan County, West Virginia, to practice medicine in 1852. In 1857, he moved back to New York, and the following year, to New Jersey. In New Jersey he served in the state legislature from 1863 to 1864 and was elected to Congress in 1891 for two terms but was defeated in his 1894 reelection effort. English wrote poetry throughout his life and according to one commentator, published over a thousand poems in magazines and periodicals. English died at Newark, New Jersey in 1902. English died April 1, 1902, and was interred in Fairmount Cemetery in Newark. His monument notes him as "Author of Ben Bolt".

Now all of these facts alone make him a very interesting character that you might expect to find on an historical marker. As a published author, poet and songwriter, English was also at one time a friend with Edgar Allan Poe, but this friendship eventually became a bitter ongoing feud with Poe.

In 1846, amidst a public scandal involving Edgar Allan Poe, Frances Sargent Osgood, and Elizabeth F. Ellet, English and Poe got into a fistfight. English unintentionally punched Poe in the face, cutting him. The two had several confrontations, usually centered around literary caricatures of one another. In 1846, English published a political romance novel called MDCCCXLII or The Power of the S.F. its plot made references to secret societies and ultimately was about revenge. It included a character named Marmaduke Hammerhead, the famous author of The Black Crow, who uses phrases like "Nevermore" and "lost Lenore." The clear parody of Poe was portrayed as a drunkard, liar, and domestic abuser. Poe's story "The Cask of Amontillado" was written as a response, using very specific references to English's novel. His most famous poem is "Ben Bolt," first published in the New-York Mirror in 1843 and later a very popular song. 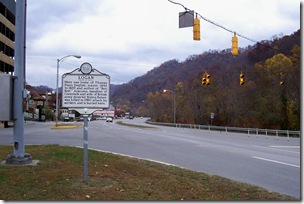 The Logan marker also mentions individuals, Aracoma and Bolling Baker, these two individuals contribute to Logan's claim to an American romantic legend. Princess Aracoma was the daughter of Chief Cornstalk who led a group of Shawnee and Mingo warriors against troops from Virginia at the Battle of Point Pleasant on October 10, 1774 near the juncture of the Ohio and Kanawha rivers in present day West Virginia. The story originated from the details of an incident in the history of the region more than 200 years ago. The story asserts that Princess Aracoma and Boling Baker moved into this valley sometime close to the year 1760 and lived in peace on the Midelburg Island on the Guyandotte River in today's Logan until 1780.

This story resulted in the writing this story into a play called the "The Aracoma Story." This play has been performed each summer since 1975, with the first production occurring back in 1952. The tale blends the Shawnee Indians with the story of young love. Boling Baker, a scout from General Braddock's Army, is captured by the Shawnee who are led by Chief Cornstalk. He is rescued from death by Cornstalk's daughter, Aracoma and adopted into the tribe that moved to the island in the Guyandotte Valley. The drama tells how Baker and Aracoma's people were weakened by disease and how a raid, lead by Baker to steal horses, ended in the destruction of this adoptive tribe. These productions are held at the Liz Spurlock Amphitheater in the Chief Logan State Park located about four miles west of the town of Logan and are produced by “The Aracoma Story, Inc” a local non-profit organization in Logan.

Posted by Little Bits of History at 12:40 PM