Birthplace of the Direct Primary 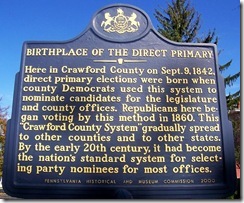 Marker Text: Here in Crawford County on Sept. 9, 1842, direct primary elections were born when county Democrats used this system to nominate county offices. Republicans here began voting by this method in 1860. This "Crawford County System" gradually spread to other counties and to other states. By the early 20th century, it had become the nation's standard system for selecting party nominees for most offices.

Location: On the east side of Diamond Park in front of the Crawford County Courthouse, Meadville, PA. Erected by the Pennsylvania Historical and Museum Commission in 2000.

Until I discovered this marker in front of the courthouse in Meadville, PA I did not know that the Direct Primary was born in Crawford County, PA the same place of my birth. Today, we might take for granted that primary elections are always apart of our political process in the U.S., but even primaries had their birth somewhere and that place was Crawford County, PA. As the marker indicates this system of primaries was initially known as the “Crawford County System.” 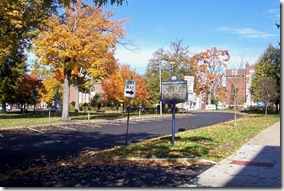 Prior to the system of primary elections political parties nominated candidates for public office through party conventions and caucuses. The idea of a primary to select candidates was born from controversy and crisis to solve other political problems. The Democrats in Crawford County were at the time the dominant political party. When several candidates were seeking the party endorsement for the general election. Delegates and candidates complained of irregularities and problems in the procedures. These problems created dissension and opened the door for the Whigs, which at the time was the other political party. The Whigs used these issues that the Democrats were having to their advantage and in some cases winning the general election.

The Democrats in Crawford County decided that they needed to develop an approach that would provide more party harmony and reduce the controversy in the proceedings of selecting candidates. The first primary in Crawford County was not actually the same as we see today. The first primary was only for local Democratic candidates and was conducted by the party leadership not as a state operated election process. The plan called for the Democrats to assembly together within their local townships on a Friday afternoon in September and vote by ballot for candidates for local office. The chairman of the township would bring the ballots the following Monday to the county convention. Each of the township chairmen would submit their township results and all the votes would be tallied and the designated party nominee would be the one with the most votes. Individuals wanting to run for a specific office were told to announce their candidacies in the local newspaper at least three weeks prior to the township meetings. This system helped the Democratic party in Crawford County bring some discipline and peace to the party process. 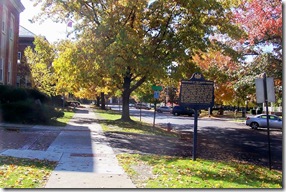 Also in order to bring further peace to the process, a committee was formed to inquire if each candidate would agree prior to the vote to support the nominee. Local Democratic voters also endorsed resolutions promising to support the eventual nominees.

Of course, not all first things go smoothly, there were skeptical Democrats who preferred to use the general election to settle internal party disputes. Some still believed that the new method would mean manipulation of the election through other means. The turnout for the first primary was encouraging and seemed to work well and gave some confidence to the skeptics.

During the rest of the 1800's the “Crawford County Plan” was adopted by party organizations in various locations in a number of states. Some experts who have examined the process, believe that this approach appealed more to the dominant party in any specific locality. For example, the Republican Party in Crawford County eventually became the majority party and then they adopted the plan in 1860. Interestingly, the Democrats abandoned the system for a time in 1850 because the rural areas complained that the system too frequently lacked rural candidates in favor of candidates in the city of Meadville, the county seat.

In 1800's the primaries that were adopted by states were mainly for local and eventually state offices. Primaries for Presidential elections only began in the early 1900's. Oregon became the first state to adopt a preferential primary in 1910, a primary where voters voted for their favorite candidates and voted for convention delegates separately. Presidential primaries rose to popularity during the election of 1912, when at least thirteen primaries were held. The next time you go to vote in the primary elections you will now know where the system of primaries was born, Crawford County, PA and most importantly, you know where I was born.

Posted by Little Bits of History at 9:32 AM