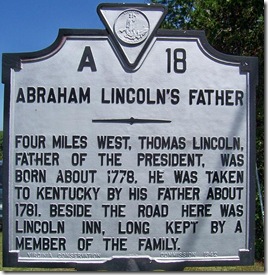 Marker No. A-18
Rockingham County, VA

Marker Text: Four miles west, Thomas Lincoln, father of the President, was born about 1778. He was taken to Kentucky by his father about 1781. Beside the road here was Lincoln Inn, long kept by a member of the family.

Today's marker has a companion marker with different text located at the site mentioned in this marker, four miles west. This marker was erected in 1942, about the birthplace of Abraham Lincoln's father. Then, in 1997, a marker on Route 42 was placed in front of the location where Thomas Lincoln was born and his family and later generations of Lincoln's lived. (I will post this marker in a few days). I found that many early historical markers were originally located on main highways even when they were miles away from the actual location mentioned in the markers. 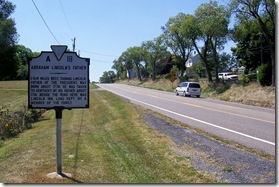 Early markers, as are current markers, were used by the state to promote tourism and this was best done by placing the marker on a major road, such as, U.S. Route 11 or the Great Wagon Road or Valley Pike as it was been called. In 1942, the road at the actual site was probably not well developed and not a road that a tourist would normally travel. Today, Route 42 is a four lane highway and more accessible. U.S. Route 11 where this marker is located was the major highway through the Shenandoah Valley in the early years of automobile travel in Virginia.

Thomas Lincoln, Abraham Lincoln's father, was born January 6, 1778, to Bathsheba and Abraham Lincoln, near Linville in Rockingham County, Virginia. Thomas was the fourth of five children born to the couple. His older siblings were Mordecai, Josiah, and Mary. Thomas had a younger sister named Nancy. During the early 1780's the family moved to Kentucky in Jefferson County. Native Americans killed Thomas’ father, Abraham, in an attack in May 1786.

Thomas moved to Hardin County, Kentucky, in 1802, and a year later purchased a 238-acre farm. Thomas married Nancy Hanks on June 12, 1806. Nancy was also born in Virginia in what is now West Virginia near Keyser, WV and her mother moved them to Kentucky after the death of Nancy's father. The couple had three children: Sarah (February 10, 1807), Abraham Lincoln (February 12, 1809), and Thomas (1812) who died in infancy. 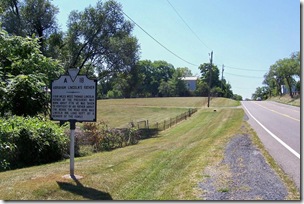 Thomas was a farmer and a carpenter and was a responsible citizen living on the frontier. He was at times a jury member, a petitioner for a road, and a guard for county prisoners. In terms of education he lacked ambition, and he never fully understood Abraham's desire to read and learn. He was a good storyteller and was popular with his neighbors.

Historical documents show that Thomas was a responsible citizen and community leader, but he repeatedly fell victim to Kentucky's chaotic land laws and was constantly frustrated by the presence of slavery. In 1816, Thomas and his family crossed the Ohio River and purchased a farm from the Federal Government in what is today Spencer County, Indiana.

In 1830, Thomas sold his Indiana property and moved to Macon County, Illinois. In 1831 he moved to Coles County which was also in Illinois. It was here that he lived for the rest of his life. Thomas Lincoln passed away on January 17, 1851, at the age of 73. Abraham Lincoln who was not close to his father, did not attend the funeral. Thomas is buried with his second wife, Sarah Bush Johnston Lincoln, in Shiloh Cemetery located one mile west of the Lincoln Log Cabin State Historic Site between Charleston and Lerna, Illinois.