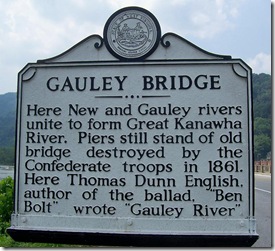 Gauley Bridge is a small incorporated municipality in Fayette County located at the confluence of the Gauley and New Rivers, where the two streams join to form the Kanawha River. Gauley Bridge due to its geographic location serves as the eastern gateway to the Kanawha Valley. 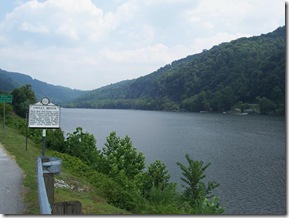 The town achieved notoriety during the Great Depression of the 1930s when hundreds of unemployed workers, many of them Southern blacks, swarmed into Gauley Bridge to take construction jobs. They served as labors on the construction of the nearby Hawks Nest dam and tunnel. The tunnel was driven three miles through Gauley Mountain, and tunnel workers almost immediately began to sicken and die. The cause was silicosis, a disease well known in Europe but not in the United States at that time. The death toll has been estimated at more than 750, making the Hawks Nest disaster among the worst industrial accidents in U.S. history.

The name Gauley Bridge derived from the presence of a wooden covered bridge used to carry traffic across the Gauley River over the James River & Kanawha Turnpike which came through here beginning in the early 1820s. Gauley Bridge being the eastern gateway to the Kanawha Valley was of strategic importance during the Civil War. 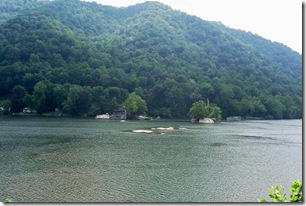 Possession of this crossing at Gauley Bridge was hotly contested and the town was the scene of heavy fighting early in the war. During 1861 and 1862, Gauley Bridge, originally Southern in sympathy, was taken and retaken three times, and the wooden bridge was burned, rebuilt, and burned again. The piers and abutments of the old bridge still stand near the modern highway bridge. (See photo above)

After the Battle of Scary Creek in Putnam County, north of St. Albans on July 16, 1861, Union General Jacob D. Cox after receiving reinforcements pushed back the Confederate army lead by former Virginia governor Henry S. Wise, now a general, who had initially defended themselves against the Union army. 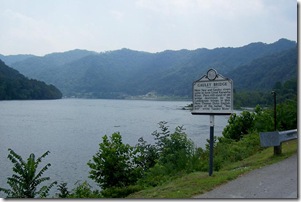 Photo taken looking west toward the Kanawha Valley. Click any photo to enlarge.

General Cox's troops drove Wise up the Kanawha Valley to Gauley Bridge and eventually into Greenbrier County. The North suffered a setback in August as General Rosecrans' advance forces were defeated at Kessler's Cross Lanes in Nicholas County while marching toward Gauley Bridge. Eventually, after a few additional neighboring battles to the east, the Union troops gained control of northwestern Virginia and the Kanawha Valley.

As stated in marker Thomas Dunn English, who was a physician, lawyer, poet, playwright, novelist, journalist, and politician wrote the poem “Gauley Bridge”. English lived in Logan, WV from 1852 until 1857. English was sued once by Edgar Allan Poe. Initially, Poe and English were friends and then became bitter rivals for the rest of their lives. You can read more about this by visiting what I posted earlier about Logan, WV.

The waters of Gauley,
Wild waters and brown,
Through the hill-bounded valley;
Sweep onward and down;
Over rocks, over shallows,
Through shaded ravines,
Where the beautiful hallows
Wild, varying scenes;
Where the tulip tree scatters
Its blossoms in Spring
And the bank-swallow spaters
With foam its sweet wing;
Where the dun deer is stooping
Bears down on his prey—
Brown waters of Gauley,
That sweep past the shore—
Dark waters of Gauley
That move evermore.

Brown waters of Gauley,
At eve on your tide,
My log canoe slowly
And careless I guide.
The world and its troubles
I leave on the shore
I seek the wild torrent
And shout to its roar.
The pike glides before me
In impulse of fear,
In dread of the motion
That speaks of the spear—
Proud lord of these waters,
He fears lest I be
A robber rapacious
And cruel as he.
He is off to his eddy,
In wait for his prey;
He is off to his ambush,
And there let him stay.

Brown waters of Gauley,
Impatient ye glide,
To seek the Kanawha,
And mix with its tide—
Past hillside and meadow,
Past cliff and moralls,
Receiving the tribute,
Of streams as ye pass,
Ye heed not the being,
Who floats on your breast,
Too earnest your hurry,
Too fierce your unrest.
His, his is the duty
As plain as your own;
But he feels a dullness
Ye never have known.
He pauses in action,
He faints and gives, o'er;
Brown waters of Gauley,
Ye move evermore.

Brown waters of Gauley,
My fingers I lave
In the foam that lies scattered
Upon your brown wave.
From sunlight to shadow,
To shadow more dark,
'Neath the low-bending birches
I guide my rude barque;
Through the shallows whose brawling
Falls full on my ear,
Through the sharp, mossy masses,
My vessel I steer
What care I for honors,
The world might bestow,
What care I for gold,
With its glare and its glow:
The world and its troubles
I leave on the shore
Of the waters of Gauley,
That move evermore.

This work is licensed under a Creative Commons Attribution No Derivatives license.
Posted by Little Bits of History at 10:54 AM