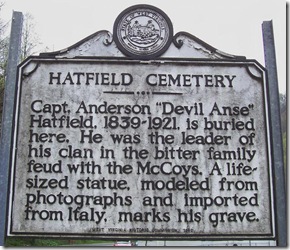 Marker Text: Capt. Anderson "Devil Anse" Hatfield, 1839-1921, is buried here. He was the leader of his clan in the bitter family feud with the McCoys. A life-sized statue, modeled from photographs and imported from Italy, marks his grave.

Location: On WV State Route 44, south of Stirrat and north of Sarah Ann WV. Erected by the West Virginia Historic Commission in 1963. 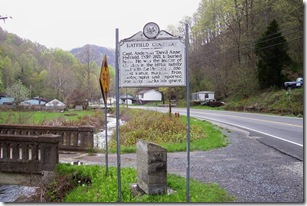 Photo taken looking north on Route 44.  Marker for historical designation of the cemetery is below state marker and the cemetery is on the hill to left across the bridge.  Click on any photo to enlarge.

When the violence between the two families ended, the strangest irony of the feud was the two main family leaders who escaped the direct consequences of the feud, unlike their family members. With all the death, suffering and violence around them, both Devil Anse Hatfield and Ole Randolph McCoy were left unharmed. Both lived well into their 80's. Randolph McCoy was the first to die in 1914 at the age of 88 from burns suffered in an accidental fire. 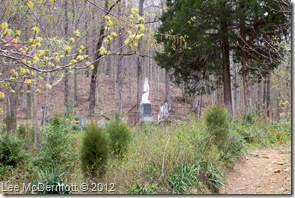 View of Hatfield’s grave from the road leading to the cemetery.

William Anderson “Devil Anse” Hatfield, who had long proclaimed his skepticism about religion became a born again Christian at the age of 73 and was baptized for the first time.

"Devil Anse" Hatfield spent the last fifteen years of his life quietly and peaceably living on a small farm he owned in Logan County along Island Creek in Sarah Ann, West Virginia. He raised a good many hogs and but seldom left his community. Once an enterprising amusement manager wanted to profit from Hatfield's fame almost convinced him to go on the vaudeville stage. He made preparations to do so but abandoned the idea when an old indictment for his arrest was produced. Authorities agreed to suppress the indictment on condition he would agree to remain at home the rest of his days. William Anderson Hatfield was born in Logan County, West Virginia, when Logan County was still within the state of Virginia on September 9, 1839. He died of pneumonia at his home on January 6, 1921 only a short distance from the old cabin where he was born.

Devil Anse's funeral was held at Sarah Ann, WV was reportedly the largest ever held in Logan County, WV. Present at this scene were the eleven surviving children of "Devil Anse," almost all of his forty grandchildren and several great grandchildren. There are about seventy-five direct descendants. 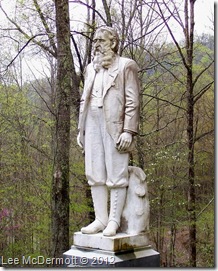 Devil Anse's widow, Levicy said her farewell at their home. At seventy-five she was unable to follow around the mountain to the grave site for the man with whom she had lived for sixty-one years. Prayer at the grave was offered by W.A. Robinson, who was a Confederate soldier in the company commanded by Captain Anderson Hatfield.

Later his widow and children had a life-sized Italy marble statue of “Devil Anse” Hatfield made to mark his grave near where he lived. The statue shipped from Carrara, Italy, where it was carved with Hatfield standing erect in the typical garb of the mountains. It is cut from Italian marble from a design furnished by F. C. McColm. The statue is thirteen feet high. On the front of it is inscribed: "Captain Anderson Hatfield, 1839-1921.” On the opposite side is engraved the names of his thirteen children.

Hatfield and his wife, Levicy Chafin Hatfield are both buried here in the Hatfield Cemetery. Both died of pneumonia, Levicy died eight years later at the age of 87. 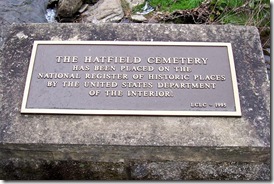 In December, 1995 the site of Devil Anse Hatfield's burial and the Hatfield Cemetery was dedicated and placed on the National Register of Historic Places by the U.S. Department of the Interior. It's not known how many McCoys were in attendance. Although the conflict subsided generations ago, the names Hatfield and McCoy continue to loom large in the American imagination. infamous Hatfield-McCoy feud which has since formed a part of American folklore. 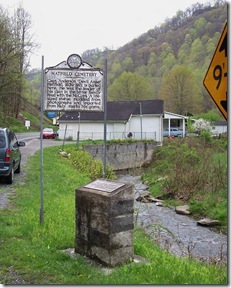 Photo taken looking south on Route 44 with Island Creek on the right.

Today, throughout Logan and Mingo County, WV and Pike County, KY the traveler will find many reminders of the famous feud. In southern WV for example, visitors come to the region for recreation on their ATV's on “The Hatfield-McCoy Trail System.” The Buffalo Mountain, Bearwallow, and Rockhouse Trail Systems are located on or near historical sites such as Blair Mountain, Matewan, and the Hatfield Cemetery where battles, feuding, and funerals once took place.

Note: I photographed this marker in 2008 and it is quite weather worn and ready for restoration. I somewhere saw a more recent photo and the marker has been refurnished with a fresh coat of paint and new post.  To view all markers related to the Hatfield-McCoy Feud, click on the link for the categories on the right column for the feud.

This work is licensed under a Creative Commons Attribution No Derivatives license.
Posted by Little Bits of History at 8:00 PM