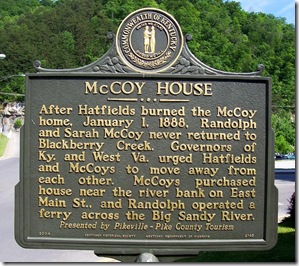 Marker Text: After Hatfields burned the McCoy home, January 1, 1888, Randolph and Sarah McCoy never returned to Blackberry Creek. Governors of Ky. and West Va. urged Hatfields and McCoys to move away from each other. McCoys purchased house near river bank on East Main St., and Randolph operated a ferry across the Big Sandy River.

Location: In Pikeville, KY at 235 Main Street. Erected by the Kentucky Historical Society, Kentucky Department of Highways in 2004.

As the feud faded, both family leaders attempted to recede into relative obscurity. After the McCoy's Home on Blackberry Fork of Pond Creek was burned during the New Year's Day raid, Randolph and Sarah lived with relatives for a time. The governors of both Kentucky and West Virginia asked the families to move further away from each other to reduce the potential violence. Eventually, Randolph and his wife, Sarah McCoy moved to this location near this marker in Pikeville, Kentucky. Randolph McCoy became a ferry operator across the Big Sandy River near this marker among other jobs he could get. 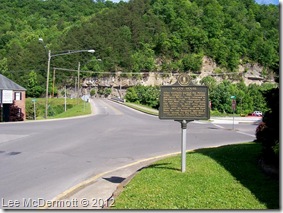 The Big Sandy River is in the background at the bridge.  Click any photo to enlarge.

One of the factors contributing to the feud over the years was economic. The McCoy's always struggled more with family economic stability and prosperity. Hatfield's had generally been much more prosperous gaining more property and personal wealth. After the violence from the feud subsided following the execution of Ellison Mounts, the two family leaders attempted to fade into the background of their respective communities. Despite the loss of lives by both families, the two family leaders lived to a ripe old age.

Randolph McCoy was the first to die on March 28, 1914 at the age of 88 from burns suffered in an accidental fire. By all accounts, he continued to be haunted by the deaths of his children. Randolph and his wife are both buried in the Dils Cemetery across the Big Sandy River not far from the location of this marker in Pikeville. The date of death of his wife is unknown.

Descendants of both men have gone on to honor their states and nation as governors, educators and physicians.  I have posted all of my Hatfield and McCoy markers on the “The Historical Markers Database.”  The database is a group of volunteers attempting to photograph and record all of the historical markers in the U.S.  Currently, there are over 300,000 markers listed.  My photos on the database are higher resolution than the photos on my blog.  Below the photo of this marker you will find links to other Hatfield and McCoy markers.

This work is licensed under a Creative Commons Attribution No Derivatives license.
Posted by Little Bits of History at 1:17 PM