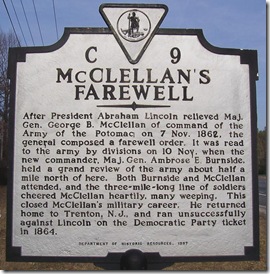 Marker Text: After President Abraham Lincoln relieved Maj. Gen. George B. McClellan of command of the Army of the Potomac on 7 Nov. 1862, the general composed a farewell order. It was read to the army by divisions on 10 Nov. when the new commander, Maj. Gen. Ambrose E. Burnside, held a grand review of the army about half a mile north of here. Both Burnside and McClellan attended, and the three-mile-long line of soldiers cheered McClellan heartily, many weeping. This closed McClellan's military career. He returned home to Trenton, N.J., and ran unsuccessfully against Lincoln on the Democratic Party ticket in 1864.

Location: At the intersection of U.S. Route 29 (Lee Highway) and County Route 605 (Colonial Road/Dumfries Road), on the west side of Lee Highway north of Warrenton, VA. Grouped with marker C-55 (Fredericksburg Campaign). Erected by the Department of Historic Resources in 1997.

Yesterday's marker told the story about Rectortown, where General George B. McClellan received the orders that he was being replaced as the commander of the Army of the Potomac. Because Gen. McClellan was essentially the “father” of the Army of the Potomac, relieving him of duty was not a simple affair. He stayed on several days with the Army before finally heading home. One can trace the activities through the historical markers in Fauquier County, VA. 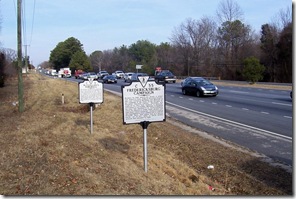 Photo taken looking north on U.S. Route 29.  McClellan gave his farewell address about 1/2 mile north of the marker and troops lined this road into Warrenton, VA.

As the historian James McPherson noted, “Nothing in McClellan’s tenure of command became him like the leaving of it.” Rejecting calls that he resist the order and march instead on Washington, McClellan urged the army to support Burnside, as one contemporary described as having “ten times as much heart as he has head”.

On Nov. 10 Burnside and McClellan held a grand review just north of Warrenton, VA about one-half mile north of the intersection of modern U.S. Route 29 and Dumfries Road, where McClellan officially said farewell to the rank and file. General McClellan spoke to the staff and senior officers of the army at the Warren Green Hotel, Warrenton, closing with, “Stand by General Burnside as you have stood by me, and all will be well”

“The army was thunderstruck by the news,” remembered an officer convinced that “it is the worst possible thing that could have been done.” And one private wrote to his parents, “I sat down and cried, and in my first distress cared no longer to continue in the service.” As Gen. McClellan rode along the broad ranks of men, the soldiers cheered and threw their hats in the air. Others expressed their love by shedding tears. No one who experienced the scene was unmoved.

While others felt differently. “They are trying to make McClellan a great man,” wrote one captain, “whereas I sometimes fear he is a great donkey.” In January 1863, John Bernard, an army engineer, wrote to Senator John Sherman: “I believe you would find that most think” that “he made the most stupendous failure.” History, he said, “records few such opportunities of greatness offered — and so stupendously” lost. The Washington correspondent for the National Anti-Slavery Standard took a different tack. The wisdom of Lincoln’s move may not be obvious outside the capital, “but here no intelligent man could fail to perceive that it required great moral courage in the President.” Perhaps the last word is best left to Robert E. Lee. In a letter to his wife he wrote, “I hate to see McClellan go. He and I had grown to understand each other so well.” To Gen. James “Old Pete” Longstreet, Lee reportedly said, “I fear they may continue to make these changes till they find someone whom I don’t understand.” A year later they would, when Lincoln called Ulysses S. Grant to lead the Union war effort.

Secretary of War Edwin Stanton ordered McClellan to report to Trenton, New Jersey, for further orders, although none were issued. On Nov. 10 he left, as ordered, for Trenton, N.J., convinced to the end that “if we have failed it was not our fault.”

McClellan was nominated by the Democrats to run against Abraham Lincoln in the 1864 U.S. presidential election. Following the example of Winfield Scott, he ran as a U.S. Army general still on active duty; he did not resign his commission until election day, November 8, 1864. George McClellan eventually did become the 24th Governor of the State of New Jersey, serving one term from January 15, 1878 until January 18, 1881.

This work is licensed under a Creative Commons Attribution No Derivatives license.
Posted by Little Bits of History at 1:00 PM