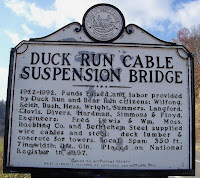 
Location: On WV Route 5, near junction with County Route 30, near the town of Trubada, three miles east of Glenville, WV.

Erected by the Gilmer Co. Historical Society and West Virginia Division of Archives and History in 2000. 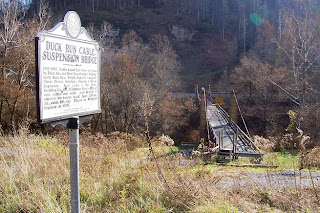 The bridge served the community for 70 years, being completed in 1922 and closed in 1992. Before its construction, you had to cross the river by driving through the water of the river from one bank to the next. These were called river fords, “fords” were these types of crossings and is seen on many markers particularly as they relate to the Civil War. You can still encounter these roads in rural sections of West Virginia today. Following World War 1, there was an attempt to improve the nation's roads in the “National Good Roads Movement,” the first national attempt to provide paved all weather roads in rural areas. 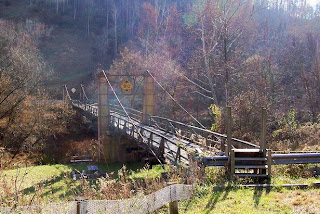 What makes this bridge interesting this the fact that its construction was supported by the local residents raising money through yard sales, cake walks, raffles, etc and the construction through supported by two county engineers was provided by local volunteers. I am confident that this is not the only rural bridge constructed this way, but it is the first one I have encountered. It is my understanding that similar bridges once existed throughout West Virginia crossing the states many rivers. Other bridges have since been replaced and removed. I would guess that this bridge remained because of its remote location and the fact that the replacement bridge was constructed upstream and it was not necessary to remove the older bridge for its construction.

The Duck Run Cable Suspension Bridge (also called the Trubada Swing Bridge) spans the Little Kanawha River between WV Routes 5 and 30, used to connect these two roads. The bridge was replaced in 1992 by a new concrete bridge about 500 feet upstream of the suspension bridge.

The overall length of the bridge is 350 feet 7 inches with the center span being 209 feet 9 inches. The two wire cables are supported by four reinforced concrete towers, two on each bank of the river.

The wire rope and all the fittings when the bridge was built were readily available from wire rope dealers. Wire rope at the time was developed for a wide variety of industrial uses and was available from companies such as Roebling and Bethlehem Steel. The timber bridge deck consists of 4 inch by 8 inch wooden planks laid flat and supported by pairs of 3 inch by 12 inch wood floor beams, 14 feet 1 inch long. These pairs of beams are in turn supported by vertical wire rope suspenders. The curb width is 10 feet, 9 inches while the overall deck width is 11 feet 6 inches. The timber for the bridge was obtained locally and the concrete for the towers was made on-site. Originally the bridge had no railings, but were added later. According to documents in 1997, there were plans to develop a recreational area around the bridge and open it for pedestrians, when I was taking these photos in 2008, there was some movement in that direction but not really well developed. The bridge seems in good condition despite its age and lack of maintenance.

Posted by Little Bits of History at 6:31 PM