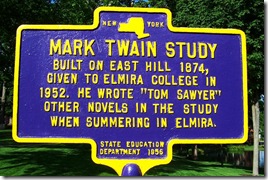 Marker Text: Built on East Hill 1874, given to Elmira College in 1952. He wrote “Tom Sawyer” other novels in the study when summering in Elmira.

Erected by the State Education Department in 1956.

Location: On the campus of Elmira College on North Main Street at the intersection with West 7th Street in Front of the Study. 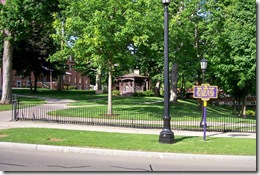 When someone mentions Mark Twain or Samuel Langhorne Clemens our minds often travel back to Missouri, the Mississippi River or Hartford or Redding, Connecticut where his family homes were located. When I went to visit my wife's family in Elmira, NY I was surprised to discover that Mark Twain was buried in the Woodlawn Cemetery in Elmira. Samuel Clemens wife's family was from Elmira and he had spent many summers during the 1870's and 1880's on his wife's family farm on the East Hill of the city. In 1874, Susan Crane presented to Samuel L. Clemens/Mark Twain the octagonal study, which now rests on the campus of Elmira College the subject of this marker. In this study Mark Twain wrote during his summers spend in Elmira at least part of some of his most memorable novels, such as, “Tom Sawyer.” Some older photos of this octagonal study in its original setting on Quarry Farm can be seen at the web site. 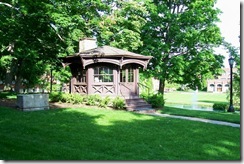 Samuel Clemens' wife Olivia was from Elmira and was from a wealthy and prominent family in the area. The story goes that Charles Langdon showed a picture of his sister, Olivia, to Twain; Twain claimed to have fallen in love at first sight. The two met in 1868, were engaged a year later, and married in February 1870 in Elmira, New York. 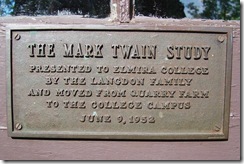 Growing up I knew Mark Twain for his many books because he was known as one of the great American writers for his works, such as, The Adventures of Tom Sawyer (1876), The Prince and the Pauper (1881), Life on the Mississippi (1883), Adventures of Huckleberry Finn (1884), and A Connecticut Yankee in King Arthur's Court (1889). So coming to Elmira and seeing one of the chief places were we wrote many of these American classics was quite interesting. Like many people, there is must more to Samuel Clemens life than just his writings as Mark Twain. During my visit to Elmira, I learned many other interesting facts about his life. Mark Twain started a publishing house and published the memoirs of Union General Ulysses S. Grant, which unfortunately was about the only successful book published, later books were not as successful, which lead him to serious financial problems. 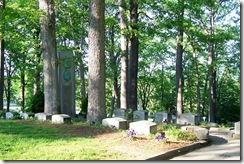 Due to Twain marrying into the Langdon family, he was able to meet many prominent people of the day, such as, Harriet Beecher Stowe, (who because a next door neighbor in Hartford), Frederick Douglass and William Dean Howells. Twain later met and credited Henry H. Rogers, a Standard Oil executive, with saving him from financial ruin, their close friendship in their later years was mutually beneficial. 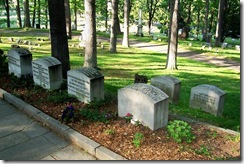 Mark Twain's friendship with Henry H. Rogers not only aided Twain with good financial advise it permitted each man to introduce the other to their circle of acquaintances. Twain was an admirer of Helen Keller. He first met Keller and her teacher Anne Sullivan at a party in the home of Laurence Hutton in New York City in 1894. Twain introduced them to Rogers, who, with his wife, paid for Keller's education at Radcliffe College. Twain is credited with labeling Sullivan, Keller's governess and companion, a "miracle worker". His choice of words later became inspiration for the title of William Gibson's play and film adaptation, The Miracle Worker. Twain introduced Rogers to journalist Ida M. Tarbell, who interviewed the robber baron for a muckraking expose that led indirectly to the breakup of the Standard Oil Trust. Twain and Rogers frequently joined by Booker T. Washington during their excursions together. 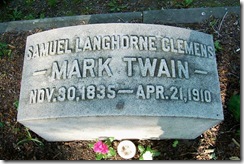 In 1909, Twain is quoted as saying: “I came in with Halley's Comet in 1835. It is coming again next year, and I expect to go out with it.” His prediction was correct as Twain died of a heart attack on April 21, 1910, in Redding, Connecticut, one day after the comet's closest approach to Earth.

Upon hearing of Twain's death, President William Howard Taft said: "Mark Twain gave pleasure – real intellectual enjoyment – to millions, and his works will continue to give such pleasure to millions yet to come... His humor was American, but he was nearly as much appreciated by Englishmen and people of other countries as by his own countrymen. He has made an enduring part of American literature."

Visiting Mark Twain's gravesite is easy while visiting Elmira. Just enter through the main gate to Woodlawn Cemetery and follow the signs posted. This cemetery is also the site for the graves for movie pioneer Hal Roach, who was from Elmira and Heisman Trophy winner, Ernie Davis who played for Syracuse University.

Posted by Little Bits of History at 1:01 PM