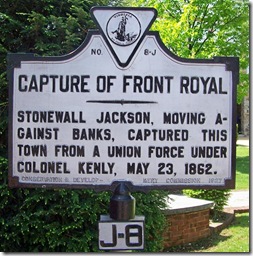 Marker Text: Stonewall Jackson, moving against Banks, captured this town from a Union force under Colonel Kenly, May 23, 1862.

Location: In front of the Warren County Courthouse on East Main Street. Courthouse is on Route 340 at the corner of South Royal Avenue and East Main Street in the town of Front Royal. Erected by the Conservation & Development Commission in 1927. 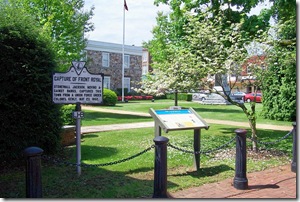 The Battle of Front Royal was the second major engagement of "Stonewall" Jackson's 1862 Valley Campaign. Jackson had deceived Banks into believing his army was still in the main Valley near Harrisonburg. Jackson managed to move his army swiftly north to New Market and crossed the Massanutten Mountains via the New Market Gap to Luray crossing the South Fork of the Shenandoah at the White House Bridge. 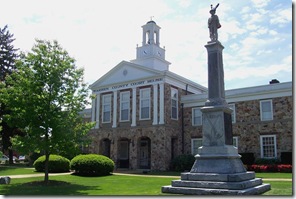 The action at Front Royal demonstrated Jackson's use of Valley topography and mobility to unite his own forces while dividing those of his enemies. At a minimal cost, he forced the withdrawal of a large Union army by striking at its flank and threatening its rear. The confusion engendered by Jackson's appearance at Front Royal and the hasty Union retreat from Strasburg to Winchester contributed materially to the defeat of Banks' army at the First Battle of Winchester on 25 May. Jackson used his cavalry to good advantage at Front Royal, to sever Union communications east and west, and to strike the final blow at Cedarville.

The Battle of Front Royal covered a wide area starting about one mile south of town and ended about two miles north of the town and crossed to rivers. Confederate artillery fired on the town from Prospect Hill Cemetery and fighting in town occurred among the courthouse and houses within the town. Front Royal was a town of about 600 people at the time of the war. On Richardson Hill, south of town, Col. Kenly covered his army's retreat while they crossed the south and north forks of the Shenandoah River. 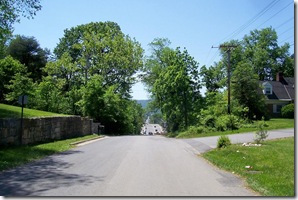 View of Front Royal from Richardson Hill, north of town looking south along North Royal Avenue.  Most of the fighting occurred along this street.  Click any photo to enlarge.

Jackson's decisive victory over a small Union force at Front Royal on 23 May 1862, forced the main Union Army at Strasburg (west of Front Royal) under Maj. Gen. Nathaniel P. Banks into abrupt retreat. The advance to Front Royal placed Jackson in position to move directly on Winchester at the rear of the Union army. On 24 May, Banks retreated down the Valley Pike to Winchester, harassed by Confederate cavalry and artillery at Middletown and Newtown (now Stephens City), setting the stage for the battle of First Winchester on May 25.

Historic Fairview (see photo below) is owned by the County of Warren, which is developing a preservation and usage plan for the site with the Warren Heritage Society. The preservation work is in progress and the front porch and back white addition in the photo I posted have been removed in order to restore the building to its original condition at the time of the battle. 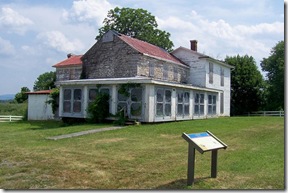 Fairview is located two miles north of Front Royal, Fairview is the former home of Thomas McKay. This is the site of the final stand of Union Col. John R. Kenly's 1st Maryland Infantry (USA) against Col. Thomas S. Flournoy's 6th Virginia Cavalry. It marked the end of the Battle of Front Royal.  (Text for the Civil War Trail marker in photo is below.)

The Union losses were 904 killed, wounded, and captured out of Kenly's garrison of about 1,000 men. The Confederate losses was fewer than 100 casualties. Front Royal was now back in Confederate hands and the Confederate army had seized an estimated $300,000 worth of U.S. quartermaster and commissary provisions. While visiting Front Royal you can receive a brochure at the visitors center that will give you a guided tour of the major sites of the battle with Civil War Trail markers explaining each location and its significance.

Front Royal was a cross roads community and because of its location it had armies on both sides pass through town throughout the U.S. Civil War. General Robert E. Lee and his army would pass through Front Royal a year later on their way to the Battle of Gettysburg. The Civil War has hard on the town, according to reports, Front Royal had no businesses that remained operating following the war. 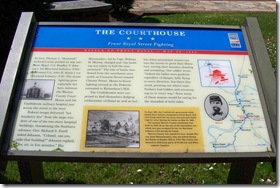 Federal troops delivered “hot musketry fire” from the large windows of one of the two-story hospital buildings, threatening the Southern advance. Gen. Richard S. Ewell asked Johnson, “Colonel, can you take that building?” Johnson replied, “Yes, sir, in five- minutes.” His Marylanders, led by Capt. William H. Murray, charged and “the building was taken in half the time promised.” The tide of battle then flowed from the courthouse area north on Crescent Street toward Chester Street. House-to-house fighting ensued as the Federals retreated to Richardson’s Hill.

The Confederates were surprised to find themselves dodging enthusiastic civilians as well as bullets when secessionist women ran into the streets to greet their liberators, waving their bonnets, cheering and screaming. One soldier wrote, “Indeed the ladies were perfectly regardless of danger, balls flying in every direction, but there they stood, pointing out where some Yankees had hidden and encouraging us in every way.” Soon many of these women would be caring for the wounded of both sides. 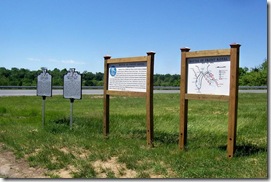 Another historical sign on the battle is located north of town between the river and Interstate 66 on Route 522/340.  Marker and text below.

(sidebar) In June, 1861, the Confederate government established three military hospitals in Front Royal. Federal troops use the two-story barrack-style building for cover during the battle on May 23, 1862.
The present Warren County courthouse was built in 1835-36 on the site of the antebellum one, which was also occupied by the 1st Maryland Infantry, USA during the battle.
Warren County was named for Gen. Joseph Warren, from Massachusetts, who was killed during the battle of Bunker Hill in 1775. The county was formed in 1836 from parts of Frederick and Shenandoah Counties. 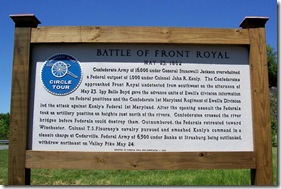 Marker Text: Confederate Army of 16,000 under General Stonewall Jackson overwhelmed a Federal outpost of 1,000 under Colonel John R. Kenly. The Confederates approached Front Royal undetected from southwest on the afternoon of May 23. Spy Belle Boyd gave the advance units of Ewell's division information on Federal positions and the Confederate 1st Maryland Regiment of Ewell's Division led the attack against Kenly's Federal 1st Maryland. After the opening assault the Federals took an artillery position on the heights just north of the rivers. Confederates crossed the river bridges before Federals could destroy them. Outnumbered, the Federals retreated toward Winchester. Colonel T.S. Flournoy's cavalry pursued and smashed Kenly's command in a classic charge at Cedarville. Federal Army of 6,500 under Banks at Strasburg, being outflanked, withdrew northeast on Valley Pike May 24. Erected by Virginia Civil War Commission. 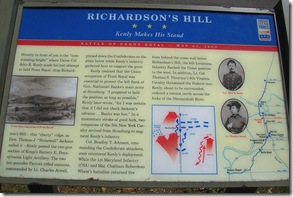 Kenly realized that the Union occupation of Front Royal was essential to protect the left flank of Gen. Nathaniel Banks’s main army at Strasburg. “I prepared to hold the position as long as possible,” Kenly later wrote, “for I was certain that if I did not check Jackson’s advance ... Banks was lost.” In a momentary stroke of good luck, two companies of the 5th New York Cavalry arrived from Strasburg to augment Kenly’s infantry.

Additional photographs on this marker can be seen at the Historical Markers Database web site on Richardson's Hill. 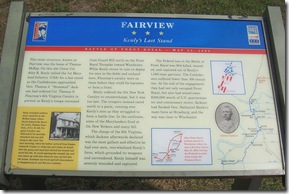 Marker Text: This stone structure, known as Fairview, was the home of Thomas McKay. On this site Union Col. John R. Kenly rallied the 1st Maryland Infantry (USA) for a last stand as the Confederates approached. Gen. Thomas J. "Stonewall" Jackson had ordered Col. Thomas S. Flournoy's 6th Virginia Cavalry in pursuit as Kenly's troops retreated from Guard Hill north on the Front Royal Turnpike toward Winchester. While Kenley strove in vain to deploy his men in the fields and orchard here, Flournoy's cavalry were on them before they could fix bayonets or form a front.

Kenly ordered the 5th New York Cavalry to countercharge, but it was too late. The troopers instead raced north in a panic, running over Kenly's men as they struggled to form a battle line. In the confusion, some of the Marylanders fired at New Yorkers and many fell.

The charge of the 6th Virginia, which Jackson afterwards declared was the most gallant and effective he had ever seen, overwhelmed Kenly's force, which grounded its weapons and surrendered. Kenly himself was severely wounded and captured.

The Federal loss in the Battle of Front Royal was 904 killed, wounded, and captured out of Kenly's 1,000-man garrison. The Confederates suffered fewer than 100 casualties. At the end of the engagement, they had not only occupied Front Royal, but also had seized some $300,000 worth of U.S. quartermaster and commissary stores. Jackson had flanked Gen. Nathaniel Banks's main force at Strasburg, and the way was clear to Winchester.

(Lower Left Sidebar): Many wounded soldiers were cared for at the McKay house, where blood stained the floors for years. Dabney Eastham, of Co. B, 6th Virgina Cavalry, was belived to be mortally wounded and was left lying in the yard. The next morning, when his father arrived from Rappahannock County to claim his son's body, he found that the grass and mud had clotted his wound and saved his life. To avoid opening the wound, the sod was taken up with him when he was carried into the house. Eastham survived and left descendants in Rappahannock and Warren Counties.  Erected by Virginia Civil War Trails.

This work is licensed under a Creative Commons Attribution No Derivatives license.
Posted by Little Bits of History at 1:34 PM