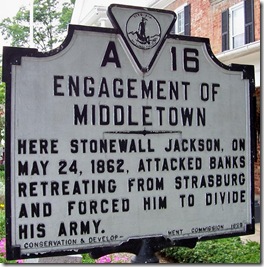 Marker No. A-16
Frederick County, VA

Marker Text: Here Stonewall Jackson, on May 24, 1862, attacked Banks, retreating from Strasburg, and forced him to divide his army.

When Union Maj. Gen. Nathaniel Banks heard of Col. Kenly's defeat and loss of Front Royal, Banks ordered a hasty retreat from Strasburg and began to move his army north on the Valley Pike toward Winchester. Confederate Maj. Gen. Thomas “Stonewall” J. Jackson divided his army moving his division to the Valley Pike (Route 11) from Front Royal and Gen. Richard S. Ewell moving his division north on the Front Royal Pike (most of the old road is current Route 522). In this way they would be able to approach Winchester from two different vantage points, Jackson on the west side and Ewell on the east. 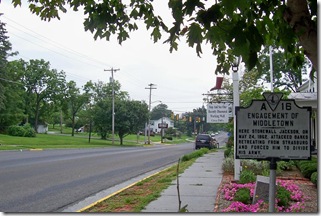 Marker is in the center of Middletown in front of the Wayside Inn.  Photo looking south on U.S. Route 11.  Click any photo to enlarge.

Jackson continued to pursue Banks’ army north on the Valley Pike and attacked again at Newtown (now, Stephens City). The Confederates took many Union prisoners and captured many wagons and stores. Jackson pressed the pursuit for most of the night and allowed his exhausted soldiers, but a few hours sleep before dawn. We will continue this story with other markers leading up to the First Battle of Winchester.

This work is licensed under a Creative Commons Attribution No Derivatives license.
Posted by Little Bits of History at 3:45 PM