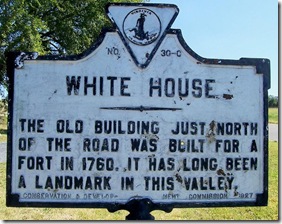 Marker Text: The old building just north of the road was built for a fort in 1760. It has long been a landmark in this valley.

Location: On the west side of Luray, VA on U.S. Route 211/340 west of the State Route 766 at a pull off in front of a small cemetery. Erected by the Conservation & Development Commission in 1927. 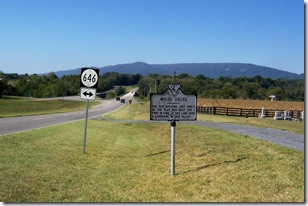 Photo taken looking west on Route 211 toward river and bridge.  White House is in the distance to the right of the markers with the white roof.  Click any photo to enlarge.

Today's marker is one of the early Virginia Historical markers originally erected in 1927. The marker text makes mention of an old fort erected around 1760, which still exists. What is not mentioned in the marker but is explained on a nearby Civil War Trails marker. This old fort played a role during Gen. “Stonewall” Jackson's Valley campaign and the White House Bridge, which once stood nearby. The marker originally was located closer to the White House and the river, where you can see the bridge is located in the background. The house is now west of the marker. It was probably moved here when the road was widened or when the new highway bridge was built. 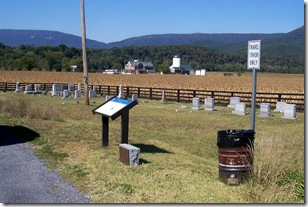 Civil War Trail marker is across from state marker in same pull off.  White House is building on the left of the marker in photo.

During Confederate Gen. Thomas J. “Stonewall” Jackson’s Valley Campaign on his way to Front Royal, VA on May 21, 1862 had his army cross here. (See text for Civil War Trail marker below)

The White House, set in a flat, open field near the South Fork of the Shenandoah River, is a two-story, three-bay Rhenish stone house covered with stucco. The present configuration of the building consists of two doors with a central window on the south facade and two windows with a door in the west bay of the northern facade. It is evident, however, that this different than the original with these alterations being made during an early 19th century reworking of the house. 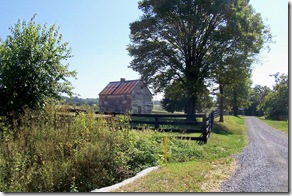 The present plan of the house consists of two rooms, the one to the east being slightly narrower, with a central chimney between them. Formerly the chimney only opened into the narrower, or kitchen section. In the course of remodeling in the early 19th century, however, this fireplace was made smaller, and another small fireplace was cut into the stack from the rear. The present window and door openings in the kitchen may have been reversed, for the present door in the south wall covers a ventilator slit for the cellar. 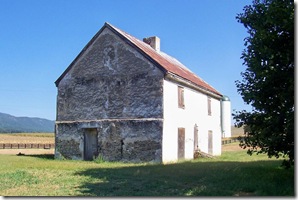 Under the house is a barrel-vaulted cellar, found in many large Germanic houses of late 18th-century Page County. No outbuildings survive, although old residents remember a log kitchen which stood to the north of the house. 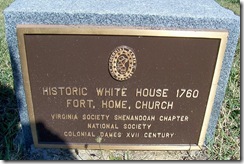 The White House, built in the second half of the 18th century, is one of an important group of Rhenish log and stone houses situated in the Page Valley in the shadow of Massanutten Mountain. Possessed of many Germanic features including a two room, central-chimney plan, a vaulted cooling cellar, and a large storage loft, it was remodeled in the early 19th century and retains from that alteration very fine Federal woodwork with its original paint. The White House is traditionally dated 1760, as are many of the Page Valley Rhenish houses. An interesting sidelight of 1827 tax records is that the property, known as White House since the 18th century, was referred to as the "Fort House," a curiously early use of that misnomer for the vaulted-cellar Germanic houses. 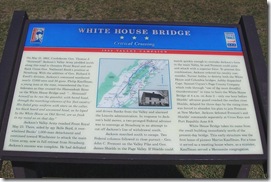 Marker Text: On May 21, 1862. Confederate Gen. Thomas J. “Stonewall” Jackson’s Valley Army plodded north along this road to threaten Front Royal and out flank Union Gen. Nathaniel Bank’s position at Strasburg. With the addition of Gen. Richard S. Ewell’s division, Jackson’s command numbered nearly 17,000 men and 50 guns. Philip Kauffman, a young man at the time, remembered the Confederates as they crossed the Shenandoah River on the White House Bridge and: “...Stonewall himself as he ran the gauntlet, with bared head, through the marching columns of his ‘foot cavalry.’ His faded gray uniform with stars on the collar, his black beard and uncovered head, as he loped by the White House on Old Sorrel, are as fresh in my mind as on that day.”
Jackson’s Valley Army reached Front Royal May 23. There, aided by spy Belle Boyd, it overwhelmed Banks’ 1,000-man detachment and continued toward Winchester to attack the main Union army, now in full retreat from Strasburg. Jackson’s success was complete. He had defeated and driven Banks from the Valley and alarmed the Lincoln administration. In response to Jackson’s bold moves, a two-pronged Federal advance was to converge at Strasburg in an attempt to cut off Jackson’s line of withdrawal south. 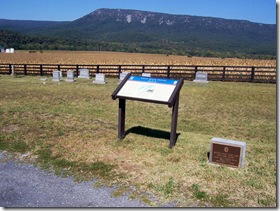 Jackson marched south to escape. Two Federal columns followed in close pursuit—Gen. John C. Fremont on the Valley Pike and Gen. James Shields in the Page Valley. If Shields could march quickly enough to overtake Jackson's force in the main Valley, he and Fremont could unite and attack with a superior force. To prevent this combination, Jackson ordered his cavalry commander, Turner Ashby, to destroy both the White House and Columbia bridges. Ashby dispatched Capt. Samuel Coyner’s Page County Company which rode through “one of the most dreadful thunderstorms” in time to burn the White House Bridge at 4 a.m. on June 2—only one hour before Shields’ advance guard reached the swollen river. Shields, delayed for three days by the rising river, was forced to abandon his plan to join Fremont at New Market. Jackson defeated Fremont’s and Shields’ commands separately at Cross Keys and Port Republic June 8-9.
White House Bridge takes its name from the small building immediately north of the present-day bridge. This early structure was the first home of pioneer Martin Kauffman. For a time it served as a meeting house where, as a minister, Kauffman served a Mennonite congregation. Erected by Virginia Civil War Trails.

This work is licensed under a Creative Commons Attribution No Derivatives license.
Posted by Little Bits of History at 11:46 AM