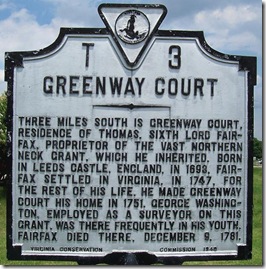 Marker Text: Three miles south is Greenway Court, residence of Thomas, sixth Lord Fairfax, proprietor of the vast Northern Neck grant, which he inherited. Born in Leeds Castle, England, in 1693, Fairfax settled in Virginia, in 1747, for the rest of his life. He made Greenway Court his home in 1751. George Washington, employed as a surveyor on this grant, was there frequently in his youth. Fairfax died there, December 9, 1781.

Location: At the intersection of U.S. Routes 17/50 (John S. Mosby Highway) and U.S. Route 340 (Lord Fairfax Parkway) on the northwest corner of the intersection, east of Winchester, VA and southwest of Boyce, VA. Erected by the Virginia Conservation Commission in 1948. 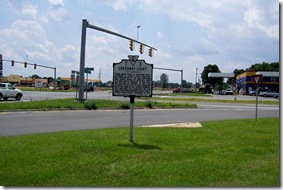 Photo taken looking south on U.S. Route 340 (Lord Fairfax Parkway), the intersection with U.S. Routes 17/50 running left to right. Traveling down road in the background will take you to Greenway Court.

The visitor to northern Virginia will encounter streets, roads, towns and counties and other places named for individuals important to Virginia's history. One such name is Thomas, sixth Lord Fairfax, Baron of Cameron or simply Lord Fairfax. The Fairfax name is seen throughout northern Virginia. Fairfax County was created in 1742 from Prince William County for Lord Fairfax. There is Lord Fairfax Community College as well as others such as roads and streets. I decided to post this marker today, because this is the anniversary of Lord Fairfax's death at Greenway Court 230 years ago on December 9, 1781.

The events that lead to Lord Fairfax living at Greenway Court began in 1649 when exiled English King Charles II granted a huge area of land between the Potomac and Rappahannock Rivers, known as the Northern Neck, to eight of his most loyal supporters. By 1681, one of those men, Thomas, Lord Culpeper, and Governor of the Virginia Colony, had acquired the interests of the others. When Lord Culpeper died in 1689 his vast land holdings of approximately 5 million acres passed to his only daughter Catherine. Catherine married Thomas, fifth Lord Fairfax. Upon their deaths the lands passed to their son, Thomas, sixth Lord Fairfax. 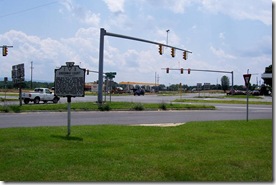 Thomas, sixth Lord Fairfax was the only Fairfax to actually reside on the 5 million acre Northern Neck Grant. In 1735 he arrived in Virginia to personally survey his land holdings. Two years later, he returned to England until 1747. Upon his return to Virginia, he lived at Belvoir along the Potomac River in present day Fairfax County and later moved to an estate, Greenway Court, in present day Clarke County, Virginia. The subject of today's marker, Greenway Court is located three miles south near the community of White Post.

While at Belvoir, Lord Fairfax made the acquaintance of a young man named George Washington whose family resided just five miles away at Mount Vernon. Lord Fairfax was sufficiently impressed with George. Fairfax hired George Washington and others to survey his lands in the Shenandoah Valley and in the eastern panhandle of current day West Virginia.

Greenway Court was the home of Lord Thomas Fairfax for thirty years, the only English peer residing in the Colonies. Lord Fairfax's decision to build and reside at Greenway Court was chiefly for the purpose of defending his land claims to the grant. Due to the fact that many settlers had already staked claim to lands in the northern neck of Virginia, Fairfax was forced into a long defense of his lands by a formidable political attack that began in 1733 and continued intermittently until after his death in 1781.

Lord Fairfax took up residence at Greenway Court in 1752 and lived out his years there in comfort, although on a scale far below that enjoyed by the average upper class Virginian. He had extensive plans for his proposed estate, but the estate was never completed. The projected manor house was never built and Fairfax resided in another house that was planned as a hunting lodge. From 1762 until his death he maintained the land office for his Northern Neck Proprietary at Greenway Court. Only a handful of the original Greenway Court buildings are still standing. The land office is located on private property, but Porter’s Lodge stands just south of White Post on Route 685. 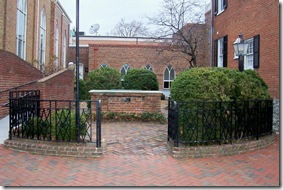 Lord Fairfax’s tomb on the grounds of Christ Episcopal Church in Winchester, VA. (Click any Photo to enlarge)

Many historical characters from this period in U.S. history visited Greenway Court. George Washington visited Fairfax at Greenway Court many times, first in 1748 as a member of a surveying party and later in his capacity as a proprietor of his own large land grants. Lord Dunmore, Royal Governor of Virginia, spent some time at Greenway Court during the Shawnee campaign of 1774, and a number of other prominent Virginians were there at one time or another. Fairfax, a leading citizen of Virginia during the third quarter of the 18th century, had an important influence on the careers of George Washington and, indirectly, on future Chief Justice John Marshall, whose father also did some survey work for Lord Fairfax. The land speculation that centered at Greenway Court for more than a decade was typical of the preoccupation with frontier lands that touched all Virginians in the years just before the American Revolution.

I have taken many historical markers related to Lord Fairfax, either directly or indirectly, because of Lord Fairfax's presence and his land grant had effects on the development and shaping of northern Virginia from its beginnings. Many existing properties and farms in Virginia and West Virginia can trace their beginnings to the Fairfax grant and Washington's original survey boundaries. Lord Fairfax is buried in Winchester on the grounds of the Christ Episcopal Church.

This work is licensed under a Creative Commons Attribution No Derivatives license.
Posted by Little Bits of History at 1:16 PM