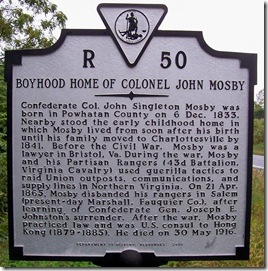 Marker Text: Confederate Col. John Singleton Mosby was born in Powhatan County on 6 Dec. 1833. Nearby stood the early childhood home in which Mosby lived from soon after his birth until his family moved to Charlottesville by 1841. Before the Civil War, Mosby was a lawyer in Bristol, Va. During the war, Mosby and his Partisan Rangers (43d Battalion, Virginia Cavalry) used guerilla tactics to raid Union outposts, communications, and supply lines in Northern Virginia. On 21 Apr. 1865, Mosby disbanded his rangers in Salem (present-day Marshall, Fauquier Co.), after learning of Confederate Gen. Joseph E. Johnston's surrender. After the war, Mosby practiced law and was U.S. consul to Hong Kong (1879-1885). He died on 30 May 1916.

Location: On Route 6 and 29, 3 miles north of Woods Mill at intersection of Mosby Lane (State Route 779) in the northbound lane. Erected by the Department of Historic Resources in 2000. 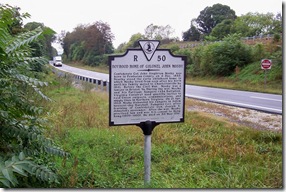 Today is the 178th Birthday for John Singleton Mosby who was born in Powahatan County, Virginia on December 6, 1833. Shortly after his birth his family moved here in Nelson County, VA near this marker where he spent his childhood. The location of his boyhood home is about 23 miles southwest of Charlottesville, VA. According to reports, John S. Mosby was a sickly child to the point that he was relieved of most chores and other household duties as a child. As a youth, his small size and general weakness led other boys to bully him. As a result, he began to learn how to use his smaller size and speed against larger and more formidable individuals. From what I could learn the house where he lived no longer stands, but the remains of the house’s foundation might still exist, but are located on private property.

In 1841, his family moved to Charlottesville, VA where John Mosby attended the University of Virginia, when he was bullied by a fellow student, George Turpin, who had invited the same violinist to play at his party on the same night John had extended an invitation. Turpin sent Mosby a noted indicating he would "beat the tar" out of Mosby the next time they met. Not eager for a confrontation from this larger, angry man, Mosby armed himself with a pepper pistol and shot Turpin in the jaw as he attempted to attack Mosby one evening soon after. 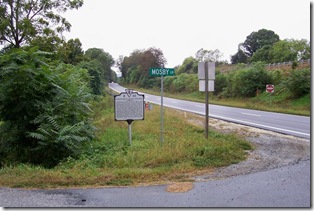 Photo taken looking south on Route 29. Marker is on the northbound side of the highway and cannot be seen while traveling south.

Mosby was convicted of malicious wounding and sentenced to one year in jail at the Albemarle County Jail in Charlottesville and a $500.00 fine. This conflict resulted in Mosby's interest in studying law. With plenty of time on his hands, John asked the prosecuting attorney if he could read some of his law books and the two began a friendship. Mosby was released from prison early thanks to a three hundred-person petition, also signed by several physicians who indicated Mosby was in poor health and may not live through the term of his confinement. He later served as a law clerk for the same prosecuting attorney, who mentored Mosby until he could pass the Virginia Bar.

John Mosby married Pauline Clarke, daughter of a Tennessee congressman, not long after he began practicing law in rural Howardsville, Virginia. Shortly after their marriage they moved to Bristol, Virginia. Mosby practiced law until the beginning of the Civil War at the age of 27. I have several markers related to John Mosby and his Civil War service as the “Gray Ghost.”  I will cover more details about his military experiences when I post related markers. Most of Mosby's actions during the Civil War occurred in Northern Virginia and a prior marker I posted on U.S. Route 50 called, “John Singleton Mosby” gives some additional background about the territory in which Mosby operated and where most of the markers exist.

Mosby is mentioned and earned the praise of General Robert E. Lee more than any other officer in the Confederate Army. Mosby and his men used deception, fear and pure audacity to offend, outsmart and outwit Union forces on countless occasions. Mosby was wounded four times during the war, at least one of which was life-threatening. Numbering fewer than two thousand men, Mosby’s Rangers kept Federal forces many times their number in check, wary and worried that at any minute they would be captured by the "Gray Ghost." 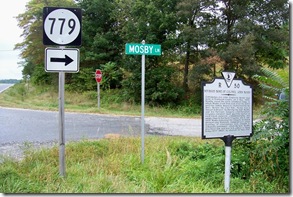 Following the Civil War, Mosby and his family lived near Warrenton, where he worked as an attorney. After repeated run-ins with occupation forces, Pauline Mosby was able to obtain a pardon for her husband personally written by General-of-the-Army Ulysses S. Grant. Despite his wartime deeds, Mosby was very much in favor of reconciliation following the war. He became a Republican and supported Ulysses S. Grant in the presidential elections of 1868 and 1872. Because of the feelings toward Grant in the South following the war, Mosby suffered the loss of much of his law practice and was even shot at as he stepped from a train in Warrenton in 1877. His wife, Pauline, as well as a son, had died in 1876, and living in the Warrenton area became too dangerous. Through Grant's intercession with President Rutherford B. Hayes, Mosby was appointed U.S. Consul to Hong Kong, a position he held for seven years, 1878-85.

Upon his return to the U.S., Mosby accepted a job with the Southern Pacific Railway, working out of an office in San Francisco, California. During these years, Mosby met a boy of about 10 years named George S. Patton, Jr., and Mosby shared his war stories and some of the secrets of guerrilla warfare with the boy who would one day lead the 3rd U.S. Army into combat in Europe during World War II. Patton's grandfather fought in the Civil War in the Battle of Scary in West Virginia. Mosby was one of the very first Assistant Attorney Generals under the Department of Justice.

He lived until age 82, mostly healthy until the last two years of his life. John Mosby died on May 30, 1916 and is buried in the Warrenton, Virginia cemetery next to his wife and several children.

This work is licensed under a Creative Commons Attribution No Derivatives license.
Posted by Little Bits of History at 8:41 AM