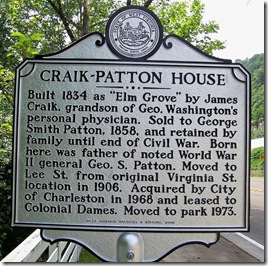 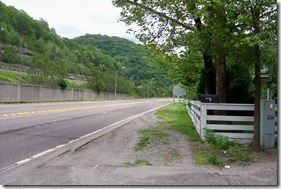 Photo taken looking east on U.S. Route 60, the entrance to the Daniel Boone Park is just beyond the marker on the right.  Interstate 64 is above the retaining wall on the left.

Today's marker is about an historic house once located within the main section of Charleston before being moved to this location in 1973. Originally located on Virginia Street, the Craik-Patton House was moved to Lee Street in the early twentieth century. The National Society of The Colonial Dames of America in the State of West Virginia, as part of the nation's Bicentennial celebration, acquired the house and moved it to Daniel Boone Park.

The Craik-Patton House, an example of American Greek Revival architecture. Originally was built near the Kanawha River by James Craik in 1834. Known then as "Elm Grove," the house has been carefully restored and authentically furnished.

Between 1834 and 1846, "Elm Grove" was home to James Craik and Juliet Shrewsbury Craik and their seven children. James Craik came as a young man to the Kanawha Valley, having inherited land near Charleston from his grandfather, Dr. James Craik, personal physician and close friend of George Washington. Mr. Craik began his career as a lawyer and a farmer, and later became the fourth rector of St. John's Episcopal Church in Charleston, WV. Following a call to Christ Church in Louisville, KY, he moved his growing family to Kentucky, where he built a home he called "Kanawha." 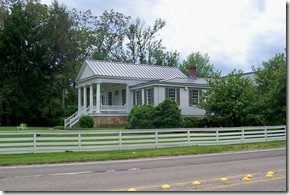 Rev. Craik's grandfather, Dr. James Craik, accepted a commission as a surgeon in Colonel Joshua Fry's Virginia Provincial Regiment on March 7, 1754. During this time, he became good friends with George Washington who was a lieutenant colonel in the regiment. Craik saw action at the Battle of the Great Meadows and participated in the surrender of Fort Necessity, then accompanied General Edward Braddock on Braddock's unsuccessful attempt to recapture the Ohio River region around Pittsburgh, PA in 1755, treating Braddock's ultimately fatal wounds. Craik then served under Washington in actions in Virginia and Maryland, during various engagements with Indians. Dr. Craik was one of three doctors present at the time of George Washington's death in 1799.

In 1858, George Smith Patton and his family purchased the home for $2,900 from Isaac Reed who resided there during the 1850s. 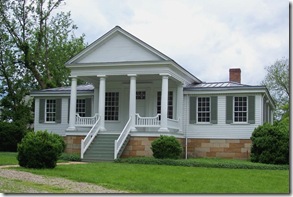 Colonel George Smith Patton organized and led the Kanawha Riflemen, which became part of the 22nd Virginia Infantry in the Confederate Army. The Kanawha Riflemen participated in the Battle of Scary Creek, west of Charleston and north of St. Albans. Later in 1864, was wounded in action and died at the Third Battle of Winchester, Virginia. His widow and children moved to California shortly before the end of the Civil War. Colonel Patton was grandfather to General George S. Patton of World War II fame. Col. George S. Patton is buried in Winchester, VA in the Mt. Hebron Cemetery. Photo of his grave can be found in my post on the Battle of Scary Creek.  Over 20 years after the Civil War a young George Patton would meet another Civil War veteran, Col. John S. Mosby.

The Craik-Patton House, once slated for demolition, has been carefully reconstructed in a serene riverside setting appropriate to its original location and is furnished to reflect the life and history of its early owners. Visitors to the Craik-Patton House may tour the house, well house, herb and boxwood gardens. The House is located adjacent to Daniel Boone Park on Kanawha Boulevard East which offers picnic facilities, boating, fishing, and a beautiful view of the Kanawha River.

The Craik/Patton House is open to the public from mid April through September 1:00-4:00 pm. A visitor to the house will find portraits of Rev. James Craik, Juliet his wife and their children.

This work is licensed under a Creative Commons Attribution No Derivatives license.
Posted by Little Bits of History at 12:02 PM