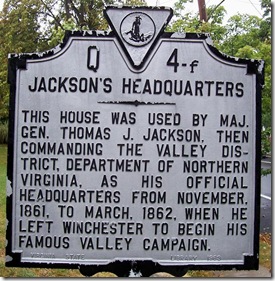 Marker Text: This house was used by Maj. Gen. Thomas J. Jackson, then commanding the valley district, Department of Northern Virginia. As his official headquarters from November, 1861, to March, 1862, when he left Winchester to begin his famous valley campaign.

Location: At 415 North Braddock Street in front of the headquarters. Erected by the Virginia State Library in 1963.

“I am quite comfortable.”
(from a letter Stonewall Jackson wrote to his wife about his stay here.) 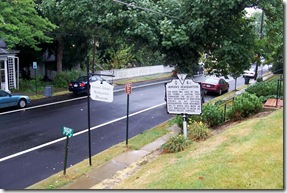 Confederate Gen. Thomas J. “Stonewall” Jackson, commanding the Shenandoah Valley military district, lived in this house from mid-November 1861 through early March 1862. His stay preceded his famous 1862 Shenandoah Valley Campaign. While here he planned a winter campaign against Union forces at Romney and Bath (present-day Berkeley Springs, WV) and his defense strategy for the Shenandoah Valley. The Shenandoah Valley was militarily significant, since it provided a good staging area for military operations into Washington, D.C., Richmond, VA and points north. The valley also was the bread basket for the confederacy providing needed food for the army. 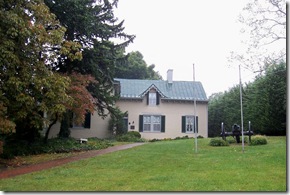 Jackson first arrived in Winchester in the spring of 1861, before the First Battle of Manassas and initially set up his headquarters at the Taylor Hotel in downtown Winchester. For a variety of reasons, Jackson was not quite comfortable with this arrangement. Jackson was a devout, Calvinist-Presbyterian and a teetotaler and he did not like being surrounded by soldiers who could find liquor so easily in the downtown area. There were far too many visitors in the Taylor Hotel who regularly disturbed him and wanted to talk about military strategies. 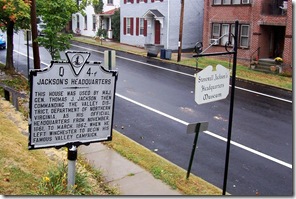 This Hudson River Gothic Revival-style cottage, Alta Vista, was built in 1854 for William M. Fuller was situated on a five acre hilltop with the front facing south toward what is now Peyton Street. The south-facing entrance overlooked a broad, open hillside with a commanding view of Winchester. So when Lt. Col. Lewis Moore, who had fought with Jackson at the First Battle of Bull Run in July 1861, offered the use of his home just outside the city, Jackson quickly moved out of the hotel. Lt. Col. Lewis T. Moore, 4th Virginia Infantry, had bought the house in 1861 and offered it to the general for his headquarters.

In a letter to his wife in November, 1861, Jackson describes his new accommodations:

“The situation is beautiful. The building is of cottage style and contains six rooms. I have two rooms, one above the other. The lower room, or office, has a matting on the floor, a large fine table, six chairs, and a piano. The walls are papered with elegant gilt paper. I don’t remember to have ever seen more beautiful papering, and there are five paintings hanging on the walls. ... The upper room is neat, but not a full story and ... remarkable for being heated in a peculiar manner, by a flue from the office below. Through the blessing of our ever-kind Heavenly Father, I am quite comfortable.” —Letter, Jackson to his wife, November 16, 1861, quoted on a Civil War Trails marker, next to this marker.

Jackson’s wife, Mary Anna, joined him in December 1861. During his time in Winchester, Jackson became fond of the community and hoped to settle here after the war. 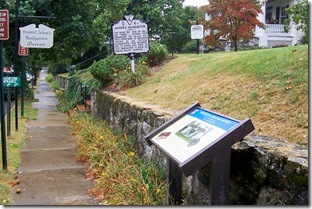 Jackson first met Lt. Col. Lewis T. Moore, an attorney, at abolitionist John Brown’s hanging in Charles Town, WV. After Moore was severely wounded at the Battle of Bull Run (First Manassas), he offered Jackson his Winchester home while he recuperated in Richmond.

At the time of the Civil War, Moore was a bachelor and had purchased the property as an investment from Dr. William Fuller, a dentist who built and lived in the house just two years before selling it after his wife and three children died from typhoid fever. After the war, Moore returned to the house, married, and had six children.

One hundred years later, the house was purchased for a museum and is now owned and operated by the Winchester-Frederick County Historical Society. The museum's collection includes many artifacts associated with Stonewall Jackson and contains the largest collection of Jackson memorabilia and personal objects from members of his staff.

Visitors can see Jackson’s saber, his ink-splotched desk, a cup and saucer that he brought from his home in Lexington and a lock of Jackson’s hair. There’s a bed he slept in and a quilt he slept under as well as a set of furniture he gave his sister for her wedding. The battle flag of the 33rd Stonewall Brigade, framed and hanging on the wall, is a highlight of the collection. On display are Jackson's personal prayer table, initialed prayer book, and many other Jackson family artifacts.

General Jackson's office is essentially the same as when he used it. Photos of the inside of the house can be found at the Historical Society's web site. If you have not already figured it why Mary Tyler Moore has anything to do with this marker, she is the great-granddaughter of Lewis T. Moore. Mary Tyler Moore in 1993 paid to paper the dining room in a reproduction of the gilt wallpaper Jackson so admired.

This work is licensed under a Creative Commons Attribution No Derivatives license.
Posted by Little Bits of History at 12:25 PM