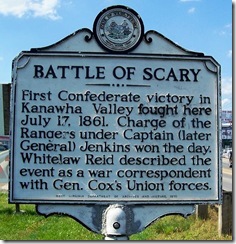 I recently read an article about a court case in Virginia involving Walmart wanting to build a new store close to the Battle of the Wilderness. The court ruled against Walmart siding with the interests to protect the battlefield. There has been many efforts to preserve what is left of Civil War battlefields and other historic sites. This article reminded me of this marker for the Battle of Scary in West Virginia north of Huntington, WV. About all that remains as a remembrance of this battle is this marker and the creek the battle is named. It is possible this marker may no longer be there, because when I took the photo there were lines next to the marker indicating that the area around the marker was to be excavated soon. Unfortunately, when work occurs around some markers they are removed and never reinstalled.

This battle is not one of the major battles of the Civil War, like, a Gettysburg, Fredericksburg, Antietam, Chancellorsville or the Battle of the Wilderness, but it is an important early battle over the territory which is now the state of West Virginia. At the beginning of the Civil War, West Virginia was apart of the State of Virginia. There were those who had an interest in splitting away from Virginia prior to the Civil War. Virginia's secession from the Union provided an opportunity for the citizens to make a formal move away from Virginia. This sentiment was known among those in the eastern parts of Virginia and keeping Western Virginia out of the hands of the Union was of particular interest. Battles, such as this one at Scary Creek were attempts by the Confederacy to prevent a Union take over of Western Virginia. 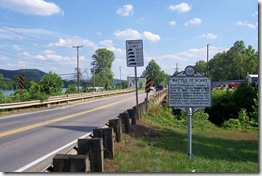 In photo Kanawha River is to the left and Scary Creek is behind marker at bridge, looking south on Route 35. Click photo to enlarge.

One of the Confederate officers who commanded troops and was wounded and captured during the Battle of Scary Creek was Colonel George S. Patton who lived in Charleston, WV. If his name seems familiar, that is because he was the grandfather of General George S. Patton of World War 2 fame. 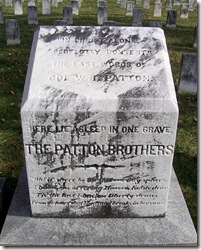 Col. Patton was buried in one grave with his brother.  Click photo to enlarge.

Colonel George Smith Patton born in Fredericksburg, Virginia, graduated from Virginia Military Institute (VMI) in 1852, second in a class of 24. After graduation, George Smith Patton studied law and practiced in Charleston, Virginia (now West Virginia). (Click for photo of Patton in 1861) When the American Civil War broke out, he served in the 22nd Virginia Infantry of the Confederate States of America. Colonel George S. Patton was killed during the Battle of Opequon or Third Battle of Winchester and was buried in the Stonewall Cemetery within the Mount Hebron Cemetery in Winchester, VA. 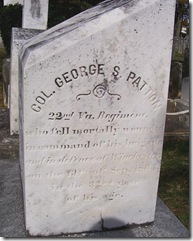 The Confederate Congress had promoted Colonel Patton to brigadier general; however, at the time, he had already died of battle wounds, so that promotion was never official. Col. Patton's son became an acquaintance of Col. John Mosby (The Gray Ghost) of Virginia following the Civil War and told many of these stories to his son, the future General George S. Patton.  To learn more visit web site on military career of Col. George S. Patton during Civil War.

One individual mentioned on the marker is Whitelaw Reid. Reid (1837–1912) was a U.S. politician and newspaper editor, as well as the author of a popular history of Ohio in the Civil War. He was the longtime editor of the New York Tribune and close friend of Horace Greeley. As a Republican, he had an illustrious career as a diplomat, serving as United States Ambassador to France from 1889 to 1892, and again as U.S. Ambassador to the Court of St. James's from 1905 to 1912. In 1892, he was the Republican vice presidential nominee replacing Levi P. Morton on a ticket headed by incumbent President Benjamin Harrison.

This work is licensed under a Creative Commons Attribution No Derivatives license.
Posted by Little Bits of History at 2:50 PM