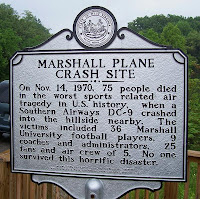 Marker Text: On Nov. 14, 1970, 75 people died in the worst sports-related air tragedy in U.S. history, when a Southern Airways DC-9 crashed into the hillside nearby. The victims included 36 Marshall University football players, 9 coaches and administrators, 25 fans and air crew of 5. No one survived this horrific disaster.

Location: Old Route 75, Kenova near the airport, road is a dead end road near the end of the airport runway.

One begins to think one is getting old when you come across an historical road marker about an event in history you can actually remember, but the Marshall Plane Crash is a one of those unfortunate, but historically significant events. I was a college sophomore when the plane crash occurred and it shocked all college sports teams across the country. Then, while I was living in West Virginia south of Huntington, WV is when they made the movie “We Are Marshall” which recalled the events at the time of the accident and the events at the University in attempting to rebuild their football program.

A chartered jet airliner carrying the Marshall University football team, coaches and a number of prominent Huntington residents crashed in flames on its approach to Tri-State Airport Saturday evening on Nov. 14, 1970. There were no survivors.

Southern Airways of Atlanta, Ga., said its two-engine DC-9 was carrying 70 passengers and five crewmen. The plane was returning the Marshall football players, most of the coaching staff and a group of supporters from Greenville, N. C., where East Carolina University defeated the Marshall team Saturday afternoon.

The crash occurred about 7:45 p. m. less than a mile west of Tri-State Airport. Weather conditions were poor and light rain was falling.

The Herald-Advertiser's Jack Hardin, the first reporter at the scene some 250 yards east of WV Route 75 south of Kenova, said:

"There's nothing here but charred bodies. It's terrible." Bodies and wreckage were scattered over a wide area. Gov. Arch A. Moore Jr. and Dr. Donald N. Dedmon, Marshall's acting president, rushed to the scene. 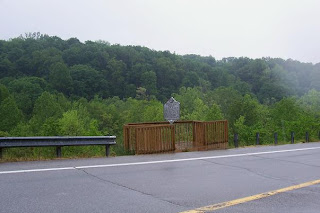 Hardin reported a piece of the plane was found on a hillside about a half-mile from the principal crash site. He said sections of bodies also were reported found there, too. Searchers were combing the hillside early this morning with the aid of flares.

At 12:10 a. m., the first bodies were placed on National Guard trucks. They were being taken to the National Guard Armory at the airport, where a temporary morgue was established. Hardin said recovery crews were running short of bags to hold the bodies.

The tragedy was the worst domestic air crash during 1970 and it was described by the FAA as one of the worst in history involving an athletic team.  The crash also was the worst in West Virginia air travel history.

Less than two months earlier, on October 3, one of two chartered planes carrying the Wichita University football team, coaches, boosters and others, crashed in the mountains of Colorado, killing 31 persons, including 13 football players.  The Marshall crash was the second fatal crash at same the airport in 16 days. Three Army officers were killed in the crash of a military plane Oct. 29. A fourth passenger, critically injured, survived. In the earlier crash, the airplane hit a hill 2,700 feet short of the runway, after apparently losing power in one of its two engines.

This year marks the 39th anniversary of the plane crash that took the lives of 75 members of the Marshall University football team, coaches, staff, community members, and crew. This year, as the University does every year since the tragedy, Marshall's Student Government Association will conduct a memorial service at the memorial fountain which commemorates the tragedy on the campus of Marshall University. The fountain is silenced each Nov. 14 during the annual memorial service honoring the victims of the 1970 Marshall plane crash and remains silent until spring.

In an interesting personal historical note about Marshall University and the events to rebuild the football program. In a January 10, 2007 article in the Huntington Herald-Dispatch about the movie, “We Are Marshall.” In the movie, they stated that the first coach hired by Marshall to replace Head Coach Rick Tolley who was killed in the plane crash, was not Jack Lengyel but Dick Bestwick, assistant coach at Georgia Tech, he changed his mind after two days and returned to Georgia Tech. What I found interesting about this fact is that Dick Bestwick had been the head football coach during the early 60's at the high school where I graduated in Pennsylvania before he went on to Georgia Tech.

For more information about the plane crash, visit the WV Historical Site.

Posted by Little Bits of History at 8:43 AM