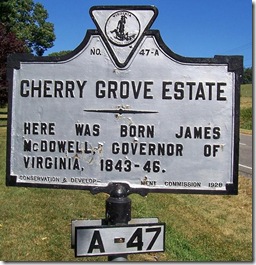 Marker No. A-47
Rockbridge County, VA

Location: On U.S. Route 11 (North Lee Highway) in the south bound lane, south of Fairfield, VA. Erected by the Conservation & Development Commission in 1928.

About 0.7 of a mile to the north are earlier posts about the McDowell family and this marker is the birthplace of James McDowell. (see Red House and the McDowell Family and McDowell's Grave) James McDowell was a cousin of Dr. Ephraim McDowell. Their fathers were brothers, Samuel and James McDowell. While Samuel McDowell moved his family to Kentucky where they made their mark on a new nation. James McDowell remained in Rockbridge County to develop these communities. 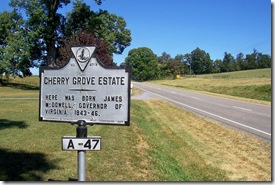 James McDowell was born here at Cherry Grove Estate on October, 11 1795. McDowell was the third child of Colonel James and Sarah Preston McDowell. He attended a classical school at Greenville, Virginia, a private school at Brownsburg, VA, Washington College (now Washington and Lee University) in Lexington, Virginia, and Yale College. He graduated from Princeton College in 1817 and studied law. He was admitted to the bar, but never practiced law. McDowell married Susan Preston, daughter of General Francis Preston & Sarah B. Campbell, and had nine children. McDowell was the brother-in-law of Senator Thomas Hart Benton, a Senator and a Representative from Missouri from 1821 to 1851. 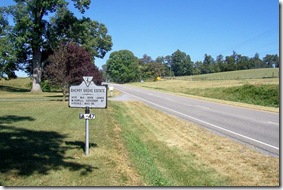 McDowell represented Rockbridge County in the House of Delegates from the Session of 1830-1831 to the Session of 1834-1835, and returned for the Session for 1838. McDowell supported both the gradual abolition of slavery after Nat Turner's Insurrection and President Andrew Jackson's proclamation against South Carolina during the Nullification Crisis. A renowned orator, McDowell was elected to a three-year term as the 29th governor of Virginia serving from January 1, 1843 to January 1, 1846.

Following his term as governor, McDowell was elected to the Twenty-Ninth Session of the U.S. Congress to fill the vacancy created by the death of William Taylor. McDowell was reelected to the Thirtieth & Thirty-First Congresses serving until March 3, 1851. McDowell died shortly thereafter on his estate "Col Alto" near Lexington, August 24, 1851. He was interred in the Presbyterian Cemetery in Lexington.  In 1858, McDowell County, VA (now West Virginia) was named for James McDowell. McDowell County was formed from part of Tazewell County, VA.

This particular marker is one of the early remaining historical markers erected in 1928. In the early days of establishing historical markers throughout Virginia some of the early markers were related to the Civil War or notable individuals, such as, governors of the state. The text of these earlier markers was typically brief and 1928 was the first year these markers were erected. Over the years many of these older markers have been damaged or destroyed and replaced with newer markers with expanded text.

This work is licensed under a Creative Commons Attribution No Derivatives license.
Posted by Little Bits of History at 12:04 PM