Knights of the Golden Horseshoe - 1934 Marker 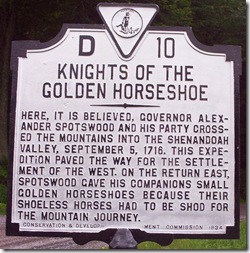 Marker Text: Here, it is believed, Governor Alexander Spotswood and his party crossed the mountains into the Shenandoah Valley, September 5, 1716. This expedition paved the way for the settlement of the west, on the return east, Spotswood gave his companions small golden horseshoes because their shoeless horses had to be shod for the mountain journey.

Location: Marker no longer exists and was replaced by a newer, updated marker in 2004 with the same identification number and the new marker is on the spot of the original 1934 marker pictured here. Originally erected by the Conservation & Development Commission in 1934. 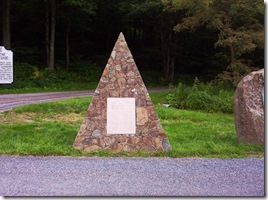 This is the only photo from a distance of the 1934 marker that I have.  It was oriented facing the road unlike the current marker.

One of my earliest photos of state historical markers that I still have is a photo of the earlier marker erected in 1934, before it was replaced. I ran across a couple of digital photos of this earlier marker when I was looking through some of my old photo CD's. The new marker was yesterday's post and can be seen at Knights of the Golden Horseshoe – 2004 Marker.  Many markers are replaced with newer versions in order to provide more accurate and reliable information or may be updated when the marker needs replaced due to damage to the original. 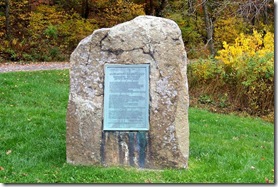 Photo on the right is the Alexander Spotswood
Discovers the Valley of the Shenandoah monument next to the D-10 state marker.

Spotswood's expedition according to existing accounts, traveled at a leisurely pace, encountered little or no loss of life or conflict with Native Americans, and included frequent stops for celebrations and libations, earned a somewhat legendary status. Though the traveling was not easy. They followed the path following up to the headwaters of the Rappahannock River, but they had to deal with thick vegetation, rocky terrain and poisonous snakes. The expedition's fame also attributed to providing further evidence supporting Virginians' self-image as being hospitable and loving of drink and conviviality. The fame was further enhanced when it was romanticized in The Knights of the Golden Horseshoe, an early chivalric romance, authored by William Alexander Caruthers, and first published in 1845. 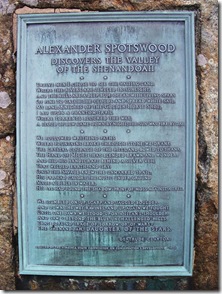 Another stone monument erected 1934 the same year of the original state historical marker is next to an earlier Pyramid shaped monument erected in 1921. (photo included in the previous post) The poem on the monument was written by Virginia poet Gertrude B. Claytor (1888–1973). Mrs. Claytor was born in Staunton, Virginia and raised in Roanoke. She published poetry in periodicals beginning in the late 1920s. This poem can be found in her 1951 collection Sunday in Virginia and Other Poems.

Alexander Spotswood
Discovers the Valley of the Shenandoah

Marker Text:
Twelve men I chose to see the waiting land,
Where the rivers are jeweled in sunlight,
And the hills are a deep blue ocean with living spars
Of pine to catch the clouds and spread white sail.
My band, Knights of the Golden Horse Shoe,
I led upon a phantom trail
Where torrents blocked the way;
A cloud of dew came down by night, the sun was fire by day.
We followed writhing paths
Where fountains broke through stone; we drank
The crystal courage of the hills, and bowed to thank
The hand of Might that blended brawn and wonder,
And hid his handicraft behind a silver veil
That welded earth and sky.
Only the Savage knew the unmarked trail;
His ear had caught the music under ground
Made audible in water,
His eye had found the shadow-print of moss against a tree.
We stumbled on, up scarp and jagged boulder
And down the wet ravines, and up again we fought
Until one dawn we stood upon a Titan’s shoulder,
And saw—beyond the blue unchallenged hills
That bore no trace of sorrow or of wars—
The Shenandoah, DAUGHTER OF THE STARS.

Erected 1934 by the Virginia State Commission on Conservation & Development.

On the Skyline Drive two miles south of this location, you can also find a wooden marker on an overlook which gives you an idea of the type of view that Spotswood and his companion might have seen on their visit.

Spotswood expedition into the Shenandoah Valley was intended to help in aiding in the western settlement of the colony that was growing rapidly. For practical reasons, once the word of the expedition circulated among the colonists traveling the route taken by Spotswood and his companions was not a popular approach to settling the valley. The descriptions of the fertile valley land beyond the mountain range were attractive, it did not do much in the short-term to open the Shenandoah Valley for development from the east. The mountain range was a formidable barrier. 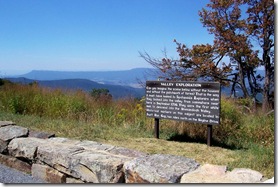 Sign Text: Can you imagine the scene below without the houses and without the patchwork of farms? That is the way it must have looked to Spotwoods Explorers when they looked into the valley from somewhere near here in September 1716. They were the first white men to descend into the Shenandoah Valley. Historical markers on this subject are located in Swift Run Gap, two miles on the Skyline Drive. 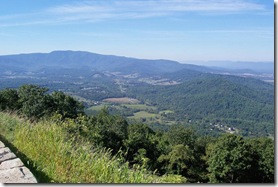 Most of the early settlers came down the Valley from the north, many of German and Scottish descent. Groups of Mennonites migrated from Pennsylvania, and settled in the general area of present-day Rockingham County and Harrisonburg, where their descendants may still be found today. Many of these earlier settlers where Lutherans and Presbyterians and the barrier of the mountain range was an advantage to their search for religious freedom and helped to provide a barrier to the influences of the Church of England.

This work is licensed under a Creative Commons Attribution No Derivatives license.
Posted by Little Bits of History at 12:10 PM