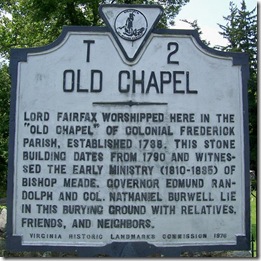 Location: At the intersection of VA Route 255 (Bishop Meade Road) and U.S. Route 340 (Lord Fairfax Highway) on the south side of Bishop Meade Road in front of Old Chapel and cemetery. Erected by the Virginia Historic Landmarks Commission in 1976. 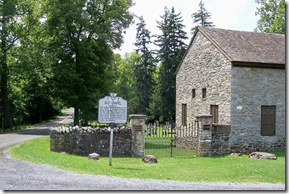 Whenever I am out and about taking photos of historical road markers, I always take special interest in the old churches and chapels I encounter. I have visited this chapel several times mainly because so many notable Virginians and their families buried in the graveyard or burying ground as it is sometimes called.

Old Chapel is situated on the slope above the burying ground at the junction of Routes 340 and 255. The graveyard, has many examples of some excellent ante-bellum gravestone art and craftsmanship. The graveyard is enclosed by a low random rubble stone wall and is shaded by numerous trees. 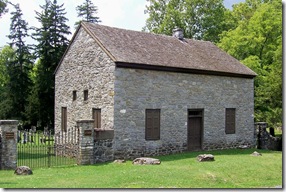 The Old Chapel is a beautiful but architecturally plain chapel in Clarke County, Virginia. Old Chapel is the oldest Episcopal church building west of the Blue Ridge Mountains. Frederick Parish, the original parish for Old Chapel and Augusta Parish were formed from corresponding counties in 1738. Lord Fairfax was one of the vestrymen of Frederick Parish. 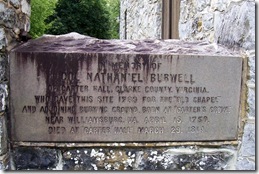 Stone marker is next to chapel and reads:  In Memory of Col. Nathaniel Burwell of Carter Hall, Clarke County Virginia.  Who gave this site 1789 for the “Old Chapel” and adjoining burying ground. Born at “Carter’s Grove” near Williamsburg, VA April 15, 1750  Died at Carter Hall March 29, 1814. (Click any photo to enlarge)

The rectangular three-bay structure is forty feet long. The gable roof is covered by wood shingles. The walls are laid in coursed rubble limestone with simple trabeated arches over the doors and windows. The west openings have flat arches in stone. Six-paneled double doors with five paned rectangular transoms open on the south, east and west. The windows are covered by shutters with those on the west having panels. All the shutters have iron strap hinges. 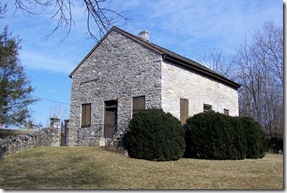 I never had the opportunity to take photos inside the chapel, the inside is described in this way. The high pulpit, set between the two eastern windows has a plain sounding board and is surrounded by an altar rail with turned balusters. Straight backed pews, marked for family occupancy by plaques, all face the pulpit. The gallery in the west end is entered by a steep stair opening from the exterior of the building. Wooden paneling encloses a small room in the southwest corner under the gallery. Wooden double-hung windows with original twelve-over twelve rashes retain the original frames.

Future Episcopal Bishop William Meade, the third Bishop of Virginia was raised in this church having been a lay reader at this Chapel and ordained a Deacon in 1811 and acted as assistant to Rev. Alexander Balmaine. The Bishop was minister at the Old Chapel for twenty-five years after Rev. Balmaine left. He gave up the charge of this church a year after Christ Church in Millwood, was built. This was for a long time the common place of worship for the Episcopalian families of Berryville, Millwood and White Post. 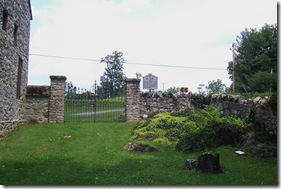 By 1832, the congregation's membership had grown and Old Chapel was too small for continued use. In 1834, the congregation build a new church more centrally located for its members in Millwood. In his book [page 288, Volume II] Bishop Meade says: "Such, however, was the attachment of many to the Old Chapel that funds for the latter could not be obtained, except on condition of alternate services at the Chapel. From year to year these services became less frequent, until, at length, they are now reduced to an annual pilgrimage, on some summer Sabbath, to this old and much loved spot; or death summons the neighbors to add one more to the tenants of the graveyard." 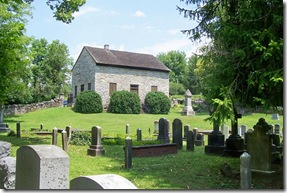 In the burying ground, still used today, lie such notables as Governor Edmund Randolph and Colonel Nathaniel Burwell as well as many others, including members of the Burwell and Page families. Although the Chapel is in the charge of the Episcopal minister at Millwood, the chapel and cemetery are owned by the Burwell Cemetery Corporation.

Many notable individuals who lived in Clarke County since the establishment of this graveyard are buried here. I have photos of many of these graves which I will post when I write about a corresponding marker. A few of the others buried here are Mrs. William Meade, the first wife of the Third Bishop of Virginia, Rev. William Meade; Philip Pendleton Cooke, a poet and story writer and colleague of Edgar Allen Poe and his brother, John Esten Cooke who was also a notable writer and novelist and also buried here. John Esten Cooke served with Gen. J.E.B. Stuart during the Civil War and later wrote a history of life in Virginia. Mr. and Mrs. Richard Evelyn Byrd, the great-grandparents of future Virginia Governor and U.S. Senator, Harry Flood Byrd, Sr. There are also eighteen graves of men who died during the Civil War fighting for the Confederacy, in addition to others who served during the war. 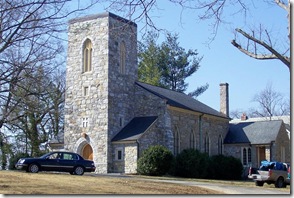 CHRIST Church, (photo to the left) Millwood, was built in the year 1834. The lot of two acres on which it stands was given for the purpose of building the church by Mr. George Burwell, of Carter Hall and is located across the road from Carter Hall.

If you enjoy my posts and have other friends who enjoy history, I would appreciate your sharing your favorite posts on Facebook, Google+, Twitter or by e-mail by clicking the appropriate icon below. Thank you for visiting. I would appreciate your comments or if you know any additional historical facts about any particular marker.

This work is licensed under a Creative Commons Attribution No Derivatives license.
Posted by Little Bits of History at 11:19 AM