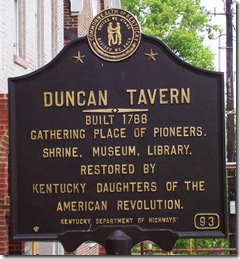 Location: In Paris, KY at 323 High St., on U.S. Routes 68 and 460 behind the Bourbon County Courthouse. Erected by the Kentucky Department of Highways.

Few of the old taverns and/or inns that were built along the early roads that helped settle areas, such as in Kentucky, still exist compared to the hundreds that once existed. The Duncan Tavern is an excellent example of one of the finest of these taverns and inns. 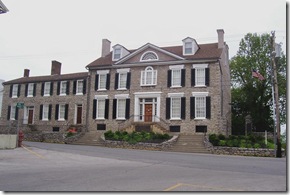 The Duncan Tavern is constructed of native limestone, has twenty rooms and is three stories high.  The rich timber resources of that early day made possible the use of the finest hardwoods of the forests. At Duncan Tavern, oak and ash girders, beams, and joists have given lasting support and ribbing to the structure due to the finest resources in hardwoods that were available in those days. There are hand-carved mantels and stone fireplaces where many famous and common citizens of the new nation gathered to share their stories of life and struggles for liberty. 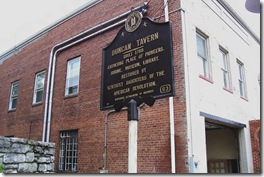 Among the guests extended hospitality were Daniel Boone; Simon Kenton; Michael Stoner; James Smith, "first rebel of the Revolution;" John Edwards, first United States Senator, who was one of the two sent from Kentucky; Aaron Burr and hundreds of others who came in their strength with ax and rifle to conquer a wilderness.

Joseph Duncan, an officer in the Revolutionary War, built it in 1788, four years before Kentucky received independent statehood from Virginia. The sign above the building read, "The Goddess of Liberty." About 1800, Major Duncan died, leaving a young widow, Anne, and six small children. At first Mrs. Duncan attempted to operate the inn, but in 1803, she leased it to John Porter of Virginia. Between these dates, she built a home flush against her tavern wall. This house was made of log construction and clapboarded; years later the facade was replaced with stone. Here she reared her children and diligently saved for their education. It was not until 1815, when a final settlement of the estate of Joseph Duncan was recorded, that we read all of the children were born in Duncan Tavern, raised there, and went out to serve as officers in the War of 1812. These Duncans became distinguished citizens in the building of the young republic. 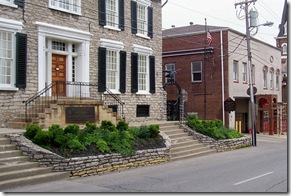 Located in a prominent position on courthouse square, The building has been in continuous use since that time as a tavern or a boarding house and is now the headquarters of the Kentucky Society of the Daughters of the American Revolution. The house next door, known as the Anne Duncan house, was built in 1801. It has been faced with stone to match the tavern and houses an extensive genealogical library.

In 1940, after years of continuous service, this historic old inn had reached such a state of dilapidation that plans were being made to tear it down to make way for city offices. A movement was initiated to save it and the city of Paris agreed to present it to the Kentucky Society, Daughters of the American Revolution, provided that organization restore it as a shrine and maintain it as state headquarters. Reconditioning started at once and today it stands in all its original stalwart beauty and is visited by tourists from all parts of the nation and many foreign lands. 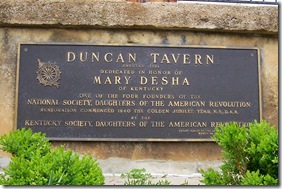 Duncan Tavern, located at 323 High Street in Paris, Kentucky, is open to the public April through mid December, from 10 a.m. - Noon and 1-4 p.m. every Tuesday thru Saturday. Tours are conducted Wednesday through Saturday at 1:30 p.m. and by appointment by calling. Duncan Tavern reopened to the public in 2003 after undergoing five years of extensive renovation. Here is the link to the web site for the Duncan Tavern

This work is licensed under a Creative Commons Attribution No Derivatives license.
Posted by Little Bits of History at 12:14 PM