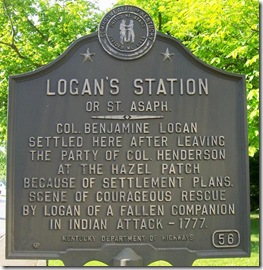 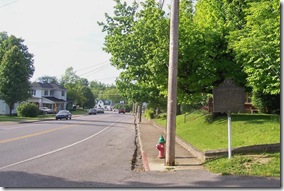 Before the creation of the town of Stanford, Kentucky was the settlement established by Col. Benjamin Logan. Due to the threat of native Indian attacks, Col. Logan needed to establish a fort to protect his family and others moving to the area to develop their land.

Col. Benjamin Logan's Fort or Station which existed from 1777 to 1790 is located one mile west of the Stanford courthouse or about 0.5 miles west from this marker. Logan's Fort set on a slight elevation about fifty yards west of the smaller spring at St. Asaph. The fort was constructed of logs and was 150 feet by 90 feet with blockhouses at three corners and a single cabin at the fourth corner. Gates were located at each end and were raised and lowered by leather thongs. The main gate faced east. Three cabins each formed the north and south walls, which were occupied by William Menniffee, William Whitley and the James Mason families. There were four cabins adjoining occupied by George Clark, Benjamin Logan, Benjamin Pettit and Samuel Coburn. 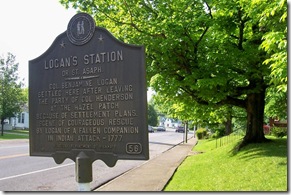 The fort's water came from a spring that lay 50 yards to the east. A tunnel was dug from inside the southeastern blockhouse to the springhouse, which covered the spring. The tunnel was four feet deep and three feet wide. A person could obtain water, undetected, in time of siege by the Indians.

The land around the fort had been cleared of all trees and vegetative cover so the Indians would not have any cover to approach the fort. The ridge to the south of St. Asaph's Branch was not cleared and most of the firing of Indian guns came from here. The distance, 200 to 250 yards, was too great, and the shot and arrows had little effect. 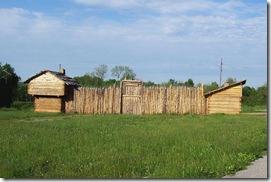 Photo is the replica of the old fort being constructed by local organization using the same methods used to build the original fort.  Fort is built on the original footprint of the first fort.

Nicknamed Standing Fort by Indians after they were unsuccessful in capturing or destroying it in May 1777. Over 100 people sought refuge here in 1780. Over time the name was simplified to "Stanford," giving the town its name. Also called Fort St. Asaph after the original name of the settlement, first settled in 1775. No original remains of the fort are known to exist.

At the foot of the hill, on St. Asaph's Branch, just below the fort, the settlers maintained a gristmill. In all probability, this was the first mill built in Kentucky. During his first visit to the fort in late April of 1778, Daniel Trabue spoke of eating bread - something that could not be obtained at Fort Boonesborough. 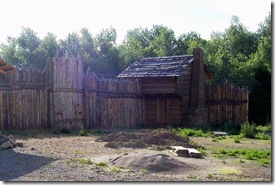 Photo is the inside view of the fort.  Construction of the fort is only about 25% complete when photo taken in May, 2011.

Capt. Briggs drew a sketch of Logan's Fort for Lyman Draper. He stated that Buffalo Spring lay about 200 yards south of the fort and a small branch descended from it with an abrupt high woody bluff above. He also confirmed the subterranean passage that led to the fort spring and that another row of cabins was built and the fort enlarged in 1778.

This work is licensed under a Creative Commons Attribution No Derivatives license.
Posted by Little Bits of History at 1:20 PM