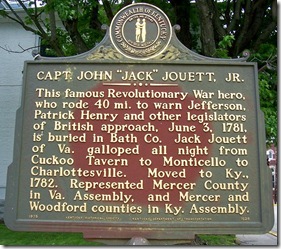 Marker Text: This famous Revolutionary War hero, who rode 40 miles to warn Jefferson, Patrick Henry and other legislators of British approach, June 3, 1781, is buried in Bath Co. Jack Jouett of Va. galloped all night from Cuckoo Tavern to Monticello to Charlottesville. Moved to Kentucky, 1782. Represented Mercer County in Va. Assembly, and Mercer and Woodford counties in Ky. Assembly.

Location: In Owingsville, KY on the Bath County Courthouse lawn, near the intersection with U.S. Route 60 and KY Route 36. Grouped with Marker No. 940 (Bath County). Erected by the Kentucky Historical Society, Kentucky Department of Transportation in 1975.

Today's marker is the final marker in my eight marker series about the Ride of Jack Jouett from Cuckoo to Charlottesville, VA. Until I take more photos about Jouett, I know about two more historic markers, which exist in Kentucky. 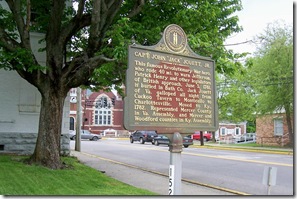 A year after Jouett's ride to warn the Virginia Legislative in Charlottesville. Jack Jouett in 1782 moved to what is now Kentucky, then it was in Virginia. A Jouett family story says that, on his way to Kentucky, Jack and his companions were moving westward through the Cumberland Gap along Daniel Boone’s Wilderness Road when they heard the screams of a woman coming from a lonely cabin. Jouett burst into the house and found a wife being abused by her husband. He attempted to intervene by knocking down the husband, but the wife did not appreciate his involvement and the lady reached for a longhandled frying pan and hit Jouett over the head so forcefully that the bottom of the pan was knocked out and the rim driven down around his neck. Jouett fled the scene and travelled 35 miles before he found a blacksmith to remove the pot.

Undiscouraged, Jouett settled down in Harrodsburg, Kentucky (then Virginia) in Mercer County and entered politics, serving as a Virginia state legislator. He helped Kentucky break free from Virginia and become a independent state and served four terms in the new legislature from both Mercer and Woodford Counties. Jouett was a prominent citizen of Kentucky. He had friendships with Andrew Jackson and Henry Clay. In business, he pioneered livestock breeding in Woodford County and importing fine horses and cattle from England. 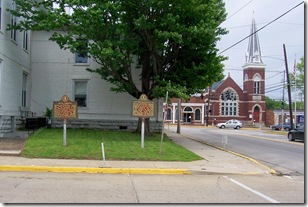 Photo of the marker on the courthouse lawn grouped with the “Bath County” marker.   Click any photo to enlarge.

While in Mercer, Jouett married Sallie Robard, whom he had known since his days in Lousia County, VA. Together they had 12 children, including the famous painter Matthew Harris Jouett. Of his famous son Jouett said, "I sent Matthew to college to make a gentleman of him, and he has turned out to be nothing but a damned sign painter." Jouett had another notable descendant, through Matthew, his grandson James Edward "Fighting Jim" Jouett. James served under Admiral Farragut, and was immortalized in Farragut's famous quote "Damn the torpedoes! Four bells! Captain Drayton go ahead! Jouett full speed!"

Jack Jouett died March 1, 1822 at his daughter's house in Bath County, Kentucky where this marker is located. He was buried in the family cemetery at his Bath County farm, “Peeled Oak”, but his grave was unmarked and lost to history until a twentieth-century researcher, the late Mrs. Joel M. Cochran of Charlottesville, Virginia, find the spot where the old Revolutionary hero was laid to rest.

If you missed the other seven posts related to Jack Jouett and his ride from Cuckoo to Charlottesville, VA here they are: (in the order they were posted)

Dr. William Fleming
City of Staunton, VA
Marker No. A-64

This work is licensed under a Creative Commons Attribution No Derivatives license.
Posted by Little Bits of History at 8:00 AM