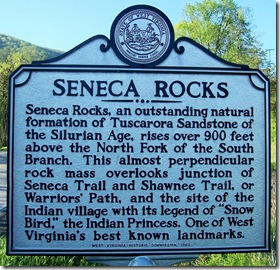 Marker Text: Seneca Rocks, an outstanding natural formation, rises over 900 feet high, overlooking the junction of the Seneca and Shawnee trails or Warriors' Path and the site of an Indian village with its legend of "Snow Bird", the Indian Princess. The almost perpendicular strata are of Tuscarora Sandstone of the Silurian Age.

Location: On U.S. Route 33 south of junction with WV Route 28. Erected by the West Virginia Historic Commission in 1963.

If you ever get the opportunity to travel across West Virginia on U.S. Route 33, particularly between Interstate 79 and the Virginia border you will witness some wonderful scenes in West Virginia. When you get to Pendleton County where Route 33 intersects with WV Route 28 you will come to Seneca Rocks. Stopping to view these rock formations is well worth the time. Seneca Rocks and nearby Champe Rocks (further north on Route 28) are the most imposing examples in eastern West Virginia of several formations of the white/gray Tuscarora quartzite. In the early morning mist the jagged outline of Seneca Rocks resembles the bony back of a giant dinosaur. 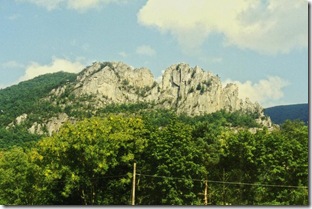 View of Seneca Rocks across from the road. Click any photo to enlarge.

Seneca Rocks is a prominent and visually striking formation rising nearly 900 feet above the confluence of Seneca Creek with the North Fork of the South Branch of the Potomac River. The Rocks consist of a North and a South Peak, with a central notch between. This vast mountain of pale stone provides cliffs and lofty crags inviting exploration by birds, rock climbers, and agile visitors. Seneca Rocks area is part of the Monongahela National Forest.

The quartzite is approximately 250 feet thick here, located primarily on exposed ridges as caprock or exposed crags. Seneca Rocks is composed of the Tuscarora Sandstone composed of fine grains of sand that were laid down in the Silurian Period approximately 440 million years ago, in an extensive sand shoal at the edge of the ancient Iapetus Ocean, which once covered what is now West Virginia. The Tuscarora Sandstone has been compacted by great pressures into an erosion-resistant rock called a quartz arenite. Now this rock, once seashore sediments, forms high mountains along the entire length of the Appalachians. 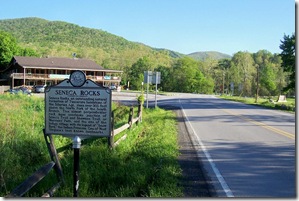 Photo taken looking north on Route 28 with the intersection with Route 33 in the background on other side of the building. Seneca Rocks is on the right of the marker across the road.

The marker also mentions the legend of Snow Bird. Snow Bird was the only daughter of Chief Bald Eagle and his wife, White Rock. As a child, Snow Bird played at the base of the Seneca Rocks and she often looked up at the peaks wanting to climb it. She was considered the most beautiful of all the young girls among the Senecas and men from every tribe came to court her creating quite a challenge in finding a mate.

The story goes that when the day came to select a mate, the young girl came up with a test for the young warriors seeking her hand. Reportedly, she was the first person to climb to the top of Seneca Rocks and she devised a trial of bravery and endurance for the seven young men who came that day.

Snow Bird would climb Seneca Rocks to the top and the seven young warriors would follow her and the one who reached the top first with her would be her mate. As the climb got higher and higher with the princess always leading the way, one man at a time dropped out.

Finally, she reached the summit and turned to look for her most persistent suitor. He was only a few feet below her, when his foot slipped on the ledge of rock. Snow Bird hesitated for a brief moment, wondering was he not the bravest and strongest of the Senecas? Where would she ever find his equal? So with the alertness and strength of her young arms, she caught the falling brave and drew him to safety and to herself. 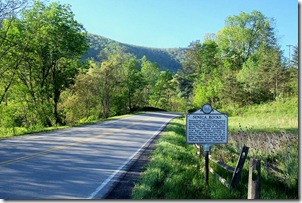 Photo taken looking east on Route 33 and south on Route 28.

After talking for a long time at the summit, they descended the rocks and stood before Chief Bald Eagle and White Rock. The chief conferred upon his newfound son-in-law the authority to become his successor as chief of the tribe.

During World War II, particularly the years 1943-44, the U.S. Army used Seneca, Nelson and Champe Rocks to train soldiers in low-altitude mountain operations. The West Virginia Maneuver Area (WVMA) was a vast, five-county training ground in the Allegheny Mountains of eastern West Virginia. This region was selected due to its similarity to the mountainous terrain of Italy and other areas within the European Theater of Operations.

Approximately 180 soldiers cycled through this course every two weeks. Instruction ranged from simple rock scrambling to tension cable work with pitons, including rigging skills and use of assault ropes with pulleys. Each class concluded with two tactical night climbs on unfamiliar rocks. They left behind an estimated 75 thousand soft iron pitons, some of which can still be found on the rocks and which inspired one of the faces to be named "The Face of a Thousand Pitons".

This work is licensed under a Creative Commons Attribution No Derivatives license.
Posted by Little Bits of History at 10:37 AM