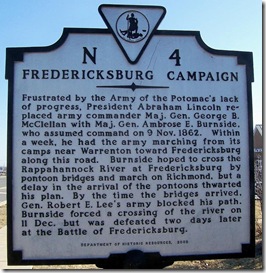 Marker Text: Frustrated by the Army of the Potomac's lack of progress, President Abraham Lincoln replaced army commander Maj. Gen. George B. McClellan with Maj. Gen. Ambrose E. Burnside, who assumed command on 9 Nov. 1862. Within a week, he had the army marching from its camps near Warrenton toward Fredericksburg along this road. Burnside hoped to cross the Rappahannock River at Fredericksburg by pontoon bridges and march on Richmond, but a delay in the arrival of the pontoons thwarted his plan. By the time the bridges arrived, Gen. Robert E. Lee's army blocked his path. Burnside forced a crossing of the river on 11 Dec. but was defeated two days later at the Battle of Fredericksburg.

“It is well that war is so terrible, otherwise men should grow too fond of it.” Comment as I remember it made to General James Longstreet by Confederate General Robert E. Lee, on seeing a Federal charge repulsed in the Battle of Fredericksburg on Dec. 13, 1862.

The above quote is one I heard many years ago and always thought it was appropriate to any war and as I learned was quite appropriate to the U.S. Civil War.  I don't have many historic markers about the Battle of Fredericksburg, which is approaching its 150th anniversary.  I have attempted during trips to the area to take photo, but I found Fredericksburg traffic quite congested and not knowing my way around I took photos of some unrelated markers and landmarks. You can find photos and information about most of the historical markers in Fredericksburg, VA by following this link to The Historical Markers Database web site. 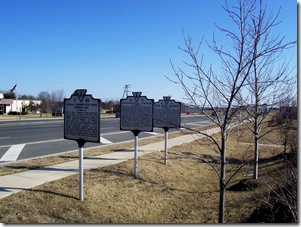 Photo taken looking south on U.S. Route 17 toward Fredericksburg.  Marker is the middle one.  Click any photo to enlarge.

The Battle of Fredericksburg was about a month following Lincoln's removal of General George McClellan from command of the Army of the Potomac and replaced him with Maj. Gen. Ambrose E. Burnside. Within a week, Burnside had reorganized the Union army into three Grand Divisions, under major generals Edwin V. Sumner, Joseph Hooker, and William B. Franklin.

On November 15, the army began its march toward Fredericksburg, though Fredericksburg was the place he intended to confront the Confederate Army. Burnside want to strike the Confederate Army further south on the way to Richmond, VA. The Army of the Potomac would need to build pontoon bridges to cross the Rappahannock River, in order to take Fredericksburg, since civilian bridges had been burned earlier, so Burnside ordered pontoons to be delivered there by the time troops arrived and were ready to cross. They would need to cross unopposed for the plan to go well.

Unfortunately, although Union forces began to arrive at the Rappahannock River near Falmouth, VA on November 17, the pontoons did not arrive until November 25.  This delay give Confederate Lt. General James Longstreet time to quickly march his Confederate troops from Culpeper to Fredericksburg in anticipation of the crossing, reaching it on November 19, and already chances of Union success were decreasing each passing day.

The weather only made things worse. With snow and freezing rain, any crossing would be delayed for days. Within two weeks of Longstreet’s arrival, Lieutenant General Thomas J. “Stonewall” Jackson and his corps arrived from the Shenandoah Valley to reunite the Army of Northern Virginia. General Robert E. Lee ordered them to guard different points on the river as far as twenty miles down. 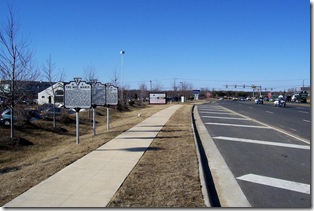 Photo taken looking north of Route 17 intersection with Route 654 in the background.

On December 10, Burnside determined that his troops would lay bridges and cross the Rappahannock River the following morning. One officer wrote that “under favorable circumstances, [the river] could be bridged in two hours”. Two bridges were to be built at the northern side of Fredericksburg, one at the southern side, known as the middle pontoon crossing and two pontoons, a mile to the south, known as the lower pontoon crossing.

Before dawn on the morning of December 11, men from the 50th New York Engineers began to lay the pontoons at the upper pontoon crossing, under cover of a fog. They didn’t go undetected for very long. They were halfway across the 400-foot span when Confederate sharpshooters from the opposite shore picked off the engineers as they worked on the bridge, making it near impossible to proceed. Nine separate attempts to complete the bridges were driven back, and even after a two-hour bombardment on the city from Union artillery on Stafford Heights, Confederates still were there to fire upon the bridge-builders. Only after Federals rowed across the river to drive out the brigade of Confederate sharpshooters could the 50th New York come close to finishing the pontoon bridges. After dusk, they were completed and the Army of the Potomac finally crossed the Rappahannock.

The Battle of Fredericksburg ended in the evening of December 13, though Burnside originally wanted to renew assaults on the 14th. He was persuaded against any further assaults, and he finally withdrew the army during the evening and night of December 15-16, having them dismantle the pontoon bridges, so they could not be pursued.

During the Battle of Fredericksburg, the Union Army of the Potomac lost 12,600 men, while the Army of Northern Virginia suffered 5,300 casualties. Yet the Confederates gained nothing from their victory, while their loss of men and supplies, not so easily replaced, had serious effects, compared to the Federals, who could afford and obtain replacement infantry and supplies. For all its gore, the Battle of Fredericksburg benefited neither army.