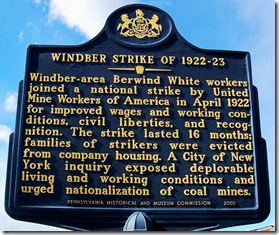 Location:  On Graham Avenue (PA Route 160) and between 13th & 15th Streets in Miner's Park, Windber, Pennsylvania in Somerset County across from the Arcadia Theater near prior marker post “Windber.” Erected by the Pennsylvania Historical and Museum Commission in 2003.

"We are no longer slaves and we are done loading three ton for two. We will never return under a scab system. We want union to protect our rights."
Striking miners at Windber, April 10, 1922

Similar to my prior posts about the Battle of Blair Mountain and William Blizzard in West Virginia other conflicts between miners and coal companies occurred throughout the U.S. in the early 20th century. A year after the Battle of Blair Mountain, miners in Windber, PA went on strike in 1922 to gain union recognition, preserve their pay rates, and have coal that they dug weighed accurately so they would be paid fairly by the ton. 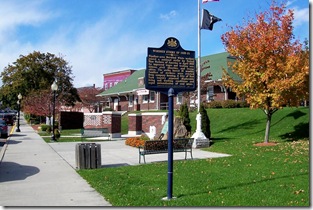 Marker is in Miner’s Park the old train station in background, now a visitor’s center.  Click any photo to enlarge.

These men were part of a much larger, national strike. Coal operators and the United Mine Workers of America (UMWA) had agreed in 1919 to wage increases and other gains for workers, however, when the contract expired on March 31, 1922, coal operators were determined to roll back any gains. No agreement could be reached, so John L. Lewis, president of the UMWA, led some 610,000 miners out on strike during the first week of April, 1922. This was the first national strike by both anthracite and bituminous miners. The nonunion miners in Windber also fought for the right to have the UMWA bargain collectively for them and to end the autocratic control that the Berwind-White Coal Mining Company had over the mines and the community of Windber.

UMWA leaders knew that having nonunion miners turn out was critical to winning the strike and the mostly immigrant miners in Windber wanted union help to win union recognition and curb owners power. Most of the miners in Somerset County are Poles, Russians, Slovaks, Hungarians, with a few Welsh and very few Irish. Many of them have been there for many years. In some instances, two generations have been working in these mines and the second generation is just as poor as was the first. 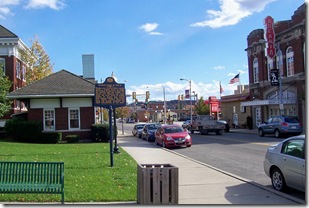 Photo taken looking east, the Arcadia Theater can be seen across the street.  Windber marker is on opposite side of the building behind this marker.

The Windber miners from different ethnic groups met on April 5 and sent messengers to other mining towns to find union representatives. John Brophy, president of the UMWA's District 2, knew how important getting the support of the nonunion miners in Windber and other Berwind-White operations in Somerset County would be to the strike. District 2 officials sent in organizers who formed three union locals in the Windber area. The miners and the union closed down all Windber-area mines by April 9. For months after, Windber's immigrant fraternal societies supported strikers financially.

Women and children joined picketing strikers to prevent strikebreakers from entering the mines. When the company evicted hundreds of strikers and their families from company housing, other families took some of the newly homeless into their privately owned residences. Other homeless families built tent colonies on the edge of town. 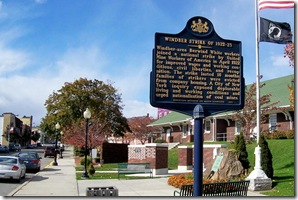 The national strike extended into the summer, when UMWA leaders, mine owners, and federal government officials began negotiating a new contract. The Warren Harding administration pressed for a settlement to end the strike and avoid a coal shortage. On August 15, 1922, operators and the UMWA signed a contract that preserved workers" gains of 1919. John L. Lewis proclaimed victory for the miners, but the contract left out nearly seventy thousand nonunion miners nationwide who had supported the strike, including the miners in Windber. The Berwind-White Coal Mining Company agreed to the contract's wage rates but refused to recognize the union. In late August, District 2 officials and representatives of 25,000 miners who had been left out of the contract resolved to continue the strike.

In September 1922, a small group of Windber miners and their families traveled to New York City to picket company offices. Delegates from Windber and other Berwind-White mines also petitioned the New York City mayor to investigate conditions in Berwind-White mines since the city's subway system ran on the company's coal. The mayor appointed an investigative committee that visited Windber and other mining towns. The committee issued a scathing indictment of the company. The committee concluded that "the living and working conditions of the miners employed in the Berwind-White Coal Mining Company's mines were worse than the conditions of the slaves prior to the Civil War."

But the committee's report had little effect on the continuing strike. The Berwind-White Coal Mining Company brought in more strikebreakers, and some of the striking miners drifted back to work during the winter and spring. In June 1923, District 2 officials reduced the amount of strike relief it paid to strikers and appealed unsuccessfully to the national union for financial support. The strike persisted until August 14, 1923, when striking locals voted to end the strike. The locals praised District 2 officials for their support, refused to criticize the national UMWA, even though it had abandoned them, and lambasted the coal companies that had defeated them. Miners in Windber and other Berwind-White towns remained under the control of the company until 1933, when the UMWA returned, this time with legal backing from the federal government, to organize miners successfully.

Link to map showing the different mine locations around Windber.

This work is licensed under a Creative Commons Attribution No Derivatives license.
Posted by Little Bits of History at 10:00 AM