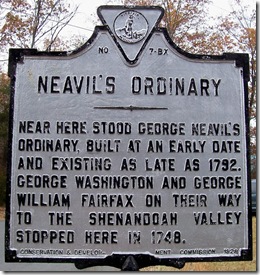 Marker Text: Near here stood George Neavil's Ordinary, built at an early date and existing as late as 1792. George Washington and George William Fairfax on their way to the Shenandoah Valley stopped here in 1748.

During my travels I have taken many photographs of historical markers related to former Ordinaries as they were called. Many of the markers are referring to Ordinaries which once existed at the location, often during the colonial period of American history. Many of these former Ordinaries no longer exist and the exact location of the Ordinary may have been lost to history. Ordinaries at one time were quite common on the old colonial roads and a welcome sight to the weary traveler. The name Ordinary came over with the earlier settlers who had Ordinaries in England. Ordinaries were also called Public Houses, Inns or Taverns, though I am not sure if there was any difference between them based on the name. 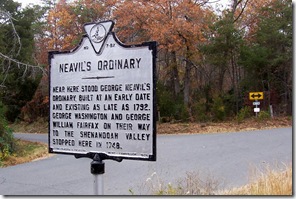 The intersection of the two roads in the background.  Neavil’s Mill is located down the road on the left.  Click any photo to enlarge.

Ordinaries provided a place for the traveler to get food, drink or whiskey. A place to sleep overnight, to stable and feed their horse. Ordinaries were important to the local people who lived nearby, the ordinary became a place to gossip, exchange news with the overnight guests, transact business such as selling land, hold auctions for livestock, pick up mail, and talk politics. Often a place to discuss issues related to independence from England.

Ordinaries or public houses varied greatly in quality. Some were little more than one-room log cabin or frame buildings with lofts and only a little furniture. Ordinaries offered overnight lodging, but the traveler paid for a place to sleep, not necessarily a private bed. Often a person shared a bed with a total stranger or two.

Hundreds, if not thousand of Ordinaries use to exist on the old Colonial roads throughout the 13 states, but they don't all qualify for an historical marker and most are simply lost to history. Unless an old Ordinary still exists today, the ones for which you will find historical markers are the ones where something significant in history occurred, such as, with today's marker indicating a Ordinary where George William Fairfax and George Washington spent the night in March, 1748. 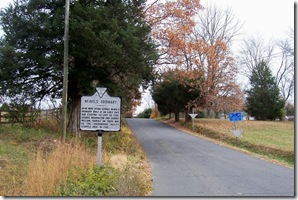 The photo taken looking southeast on the Old Dumfries Road. When taking photo I noticed what appeared to be the ruins (left in photo) of an old foundation, but unknown whether these had anything to do with the old ordinary.

The Dumfries Road was an east-west thoroughfare for farmers to take their crops from the northern Piedmont to the port town of Dumfries on Quantico Creek in eastern Prince William County, Virginia. The Dumfries Road was also a major route of travel for immigrants settling the Blue Ridge and Shenandoah Valley. Dumfries Road intersected with the Carolina Road at Auburn (where ordinary was located) then branched north and south. By the mid-18th century, George Neavil opened an ordinary at the crossing creating the development of a small crossroads settlement.  In addition to this Ordinary George Neavil also built a mill about 1/2 mile west of here which parts still exist, but that is another marker, though the exact location of the Ordinary is uncertain.

By the time of the Battle of Auburn in 1863, the colonial era roads in this area had been replaced by a new road pattern but would have allowed the local movement of troops north and east of Auburn. Traces of the old colonial roads still exist on private property, but generally run parallel the current roads. According to some information I read some of the old colonial roads might actually be the driveways leading to the homes of current residents.

Whether or not Neavil’s Ordinary was still operational after 1792, the structure apparently survived through the Civil War. According to some sources in 1924 reported that the old ordinary was still surviving, but in ruins on the green in Auburn.

This work is licensed under a Creative Commons Attribution No Derivatives license.
Posted by Little Bits of History at 11:39 AM