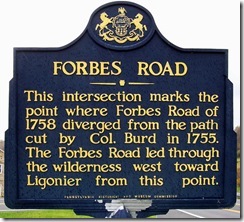 Marker Text: This intersection marks the point where Forbes Road of 1758 diverged from the path cut by Col. Burd in 1755. The Forbes Road led through the Wilderness west toward Ligonier from this point.

Location: At the junction of U.S. Route 30 & PA Route 31, 4 miles West of Bedford, PA. Erected by the Pennsylvania Historical and Museum Commission in 1947. 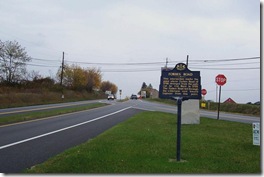 Many historical road markers speak of the creation of early colonial roads that existed in the area or in most cases still exist in some form though they have gone through many evolutions. When the first settlers landed in places, like Jamestown, VA, they chiefly used the waterways, such as, the James River, Chickahominy River or the Chesapeake Bay to travel to other locations or form other communities. Eventually, the need for developing trails and later roads were needed to journey further inland away from main waterways. Many early colonial roads developed from paths through the wilderness that were already in use by Native Americans. Often, these early roads main purpose was as a military transportation route, later their importance in aiding in the develop of a region where realized.

The Forbes Road stretched about 200 miles from Carlisle, PA to the Forks of the Ohio River where present day Pittsburgh is located. The road was a project directed by Brigadier General John Forbes, the commander of the 1758 British expedition that built it. An earlier road built three years before by a military expedition by General Braddock resulted in Braddock's Road going to the same destination by a different route through Maryland and Pennsylvania. The Forbes Road was the second western land route that the British cut through the mid-Atlantic back country during the French and Indian War. These early roads were really nothing more than 12 to 20 foot wide paths cut through the woods following older Native American trails providing enough room for wagons and artillery to travel. 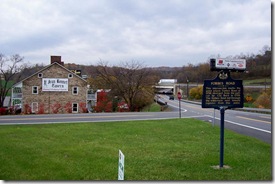 Photo taken looking east on Route 30 on the right with the PA Turnpike in the background at the overpass. and Route 31 goes to the left.

Like General Edward Braddock before him, Forbes faced an almost impossible task: transporting an army and artillery to the Forks of the Ohio through a wilderness previously traveled only by Native Americans, fur traders, and pack animals. Fortunately for Forbes, he had Braddock's experience to guide him. He realized the importance of supply lines and fortifications, and so he built the road at a slow, deliberate pace, constructing forts at regular intervals. He also refrained from engaging the enemy prematurely, protecting his army from destruction before it reached Fort Duquesne.

In determining his route west, Forbes decided not to make use of Braddock's Road. This decision angered the Virginians, including George Washington, who accompanied Forbes army, but Forbes suspected that the Virginians had other motives for advocating Braddock's route. Virginia and Pennsylvania still contested the ownership of the Ohio Country. The Forbes Road made communication and trade easier between the eastern and western portions of the Pennsylvania colony and provided an important route west for settlers going to the Ohio Country and the Virginians knew this would favor Pennsylvania's traders and settlers once the war was over. 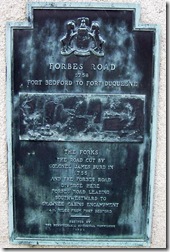 The Forbes Road took so long to complete that the British did not approach Fort Duquesne until November, when an army would typically suspend operations and move into winter quarters. Nevertheless, the route provided some important advantages that ultimately made the Forbes Expedition a success. Today, anyone who has traveled the Pennsylvania Turnpike between Harrisburg and Pittsburgh has followed in the basic footsteps of Forbes's army.

You will find many Forbes Road Markers that historically document the path General John Forbes journeyed with his army, most of the markers indicate where Forbes established a camp or a fort for the purposes of defense and resupply of the army. 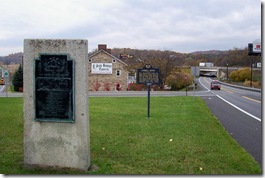 Older Forbes Road Monument with the Forbes marker.  Route 30 to the right with the PA Turnpike overpass in the background.

This particular marker tells the point where Forbes decided to take a different route from the road Braddock's army had constructed. In 1755, Pennsylvania's James Burd had already started to open a road part of the way in order to provide Braddock with an alternative route for supplies from eastern Pennsylvania. Burd never completed it due to Braddock's defeat and death. The older Burd road thus solved the problem of getting Forbes' army from Shippensburg to a point west of Raystown (today's Bedford) where this marker is located. Forbes and his engineers decided to build the road northwest from this point where Burd's unfinished road turned southwest. From this point, Burd's road would now be Route 31 going south. The path of Forbes Road approximates a portion of the present Lincoln Highway (U.S. Route 30) from Bedford to Pittsburgh in western Pennsylvania and parts of the original road can still be visited. There are several markers about Forbes Road which will give me the opportunity to share other interesting facts about its purpose, construction and story.

This work is licensed under a Creative Commons Attribution No Derivatives license.
Posted by Little Bits of History at 11:01 AM