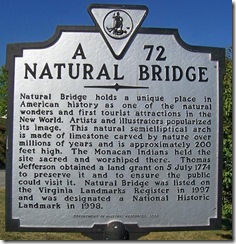 Marker Text: Natural Bridge holds a unique place in American history as one of the natural wonders and first tourist attractions in the New World. Artists and illustrators popularized its image. This natural semielliptical arch is made of limestone carved by nature over millions of years and is approximately 200 feet high. The Monacan Indians held the site sacred and worshiped there. Thomas Jefferson obtained a land grant on 5 July 1774 to preserve it and to ensure the public could visit it. Natural Bridge was listed on the Virginia Landmarks Register in 1997 and was designated a National Historic Landmark in 1998. 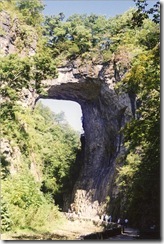 A person coming to visit the Natural Bridge in Virginia might not be aware that they are actually coming to probably one of the first tourist attractions in the U.S. dating back to the time of Thomas Jefferson.

Deemed the “Bridge of God” by Monacan Indians, the Bridge has a rich spiritual history for Native Americans dating back over 300 years.

Surveyed by a young George Washington in 1750 for Lord Fairfax, proprietor of the Northern Neck of Virginia, the Natural Bridge had caught the eye of many in colonial America. According to legend, the youthful George Washington while surveying the surrounding acreage of Natural Bridge scaled some 23 feet up the left wall of the bridge and carved his initials ‘G.W.’, which may still be seen today. Unless, you are George Washington the owners take a dim view of others wishing to do the same. 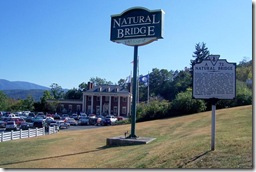 Natural Bridge is today located in Rockbridge County named for the natural wonder of the bridge within its bounds. and one of only a handful of Virginia counties given geographical names (Highland, Bath, Shenandoah, Alleghany, Appomattox, and Rappahannock rather than being named after a person). No other county in the United States is named Rockbridge.

Natural Bridge was formed when a cavern collapsed and left the span that stands today. The Natural Bridge arch is composed of solid grey limestone and is 215 feet high, 40 feet thick, 100 feet wide with a 90 foot span between the walls. The arch contains 450,000 cubic feet of rock weighing 72,000,000 pounds or 36,000 tons and is estimated to be at least 500 million years old. At it's peak, the bridge is 1,160 feet above sea level. It crosses Cedar Creek. The Lee Highway, U.S. Route 11, crosses over the chasm cut by the creek on the Natural Bridge itself. 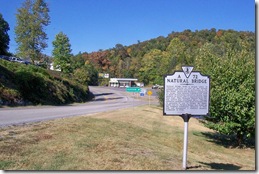 This marker erected in 2000 replaced an earlier marker erected in the 1930's with the same number and title. The text on that marker read “Legend says that the Monocan Indians called it ‘The Bridge of God’ and worshipped it. Thomas Jefferson was the first American owner, patenting it with 157 acres on July 5, 1774, ‘for twenty shillings of good and lawful money.’ Millions of years old, Natural Bridge is considered one of the seven natural wonders of the world.”

If you find yourself in Rockbridge County, VA, which is south of Lexington, VA Natural Bridge is well worth a visit though be prepared to take a short, but pleasant hike. To learn more about planning a visit go to Natural Bridge Web site  The Natural Bridge was designated a National Historic Landmark by the US Department of the Interior in 1998.

This work is licensed under a Creative Commons Attribution No Derivatives license.
Posted by Little Bits of History at 7:45 PM