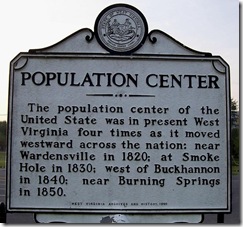 Marker Text: The population center of the United States was in present West Virginia four times as it moved westward across the nation: near Wardensville in 1820; at Smoke Hole in 1830; west of Buckhannon in 1840; near Burning Springs in 1850.

Location of the Hardy County marker: On WV Route 55 in Wardensville next to the Wardensville Visitors Center. Grouped with marker titled Wardensville. Erected by the West Virginia Archives and History in 1999. 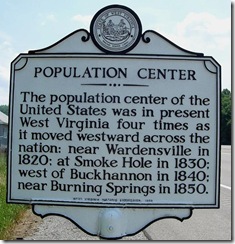 Location of the Upshur County marker: On U.S. Route 33/119, at junction with County Route 5/1 (Sauls Run Road), Lorentz. Erected by the West Virginia Historic Commission in 1965.

The results of the 2011 census are beginning to come to light as we see how the population of our specific areas of the country have changed in the past ten years. I recently heard that the population of the county where I live increased 18% in the last ten years. Sometime in April, the U.S. Census will announce the population center of the United States from the results of the 2010 census totals. Each decade, after it tabulates the decennial census, the Census Bureau calculates the center of population. The center is determined as the place where an imaginary, flat, weightless and rigid map of the United States would balance perfectly, if each resident were of identical weight represented as points of equal mass.

The mean center of United States population (using the centroid definition above) has been calculated for each U.S. Census since 1790. Following the 1990 census, this point was located in Texas County, Missouri, in the central part of the state. 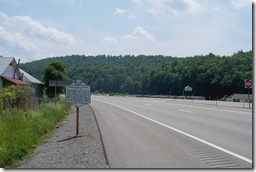 However, when Washington, D.C. was chosen as the federal capital of the United States in 1790, the center of the U.S. population was in Kent County, Maryland, a mere 47 miles (76 km) east-northeast of the new capital. Over the last 220 years, the mean center of United States population has progressed westward and, since 1930, southwesterly, reflecting population drift. 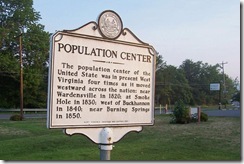 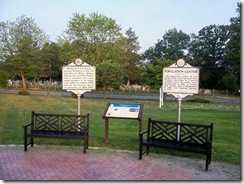 In 1810, the population center was located in Loudoun County VA, just northwest of Waterford, 40 miles northwest of Washington, D.C. Following the second decennial census in 1800, Howard County, MD, 18 miles west of Baltimore, MD., was determined to be the center of population.

This work is licensed under a Creative Commons Attribution No Derivatives license.
Posted by Little Bits of History at 8:43 PM