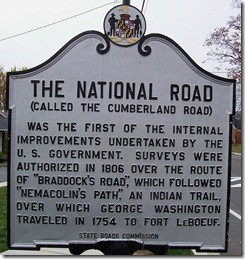 Marker Text: Was the first of the internal improvements undertaken by the U.S. Government. Surveys were authorized in 1806 over the route of “Braddock’s Road,” which followed “Nemacolin’s Path,” an Indian trail, over which George Washington traveled in 1754 to Fort LeBoeuf.

Location:  West of Cumberland, Maryland on U.S. Route 40 (National Highway) between Mary Court and Grant Drive on the south side of the street across from the Allegany Co. Library. Erected by the State Roads Commission. 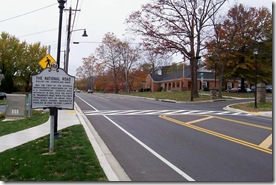 Photo taken looking west on Route 40, Allegany Co. Library building is on the right in the background.

Each evolution of the road over the years did not exactly follow the former trail or road. Each route made changes and improvements to the previous route as each developed, by building bridges, straightening the route, lengthening each road to cover more territory, or finding better paths to cut through and around mountains. For the adventurous, a person traveling today's U.S. Route 40 can still find traces of the old National Road and its bridges as well as old sections of Braddock's Road that were left isolated from the ever evolving road.

This marker mentions the fact that the Cumberland Road followed the route of Braddock's Road, but from where this marker is located the Old Braddock Road is actually located south of this location closer to Interstate 68. It does begin to follow the same route further west. 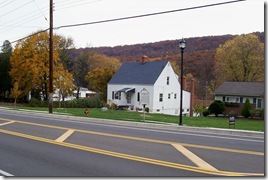 After the organization of the general government in 1789, the tide of settlement from the East to the West increased steadily. Braddock's Road had been used by many traveling west. The increased traffic and use wore out the existing Braddock's Road and made it difficult to travel and utterly inadequate to the developing public need for transporting goods and additional settlers. Due to the importance of the old Braddock's Road to the settlement of the western regions of the country, it was the first to receive national treatment. In 1806, the sum of $30,000 was appropriated by Congress to open and make the "Cumberland Road" from Fort Cumberland east of this marker to the Ohio River in West Virginia, then Virginia at the time. From this time on it was known as the "Cumberland Road." Between 1810 and 1815, $170,000 were appropriated to be spent for the road between Cumberland and Brownsville, Pennsylvania. In 1818, the sums of $52,984 and $310,984 was appropriated for the Cumberland Road in general. A number of bridges were built for the road for which several still exist, such as, the Castleman (or Casselman) Bridge near Grantsville, MD. 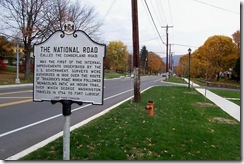 The length of the road from Cumberland, MD to Wheeling, WV was 132 miles, of which 34½ miles were in Maryland. From the time the National Road was opened to the public in 1818 until the coming of the railroads in 1852-53, the National Road was the one great highway over which passed the bulk of trade and travel, and the mails between the East and West. The old National Road provided ready access to the trans-Appalachian region and greatly stimulated its settlement and growth.

In the early 1850's the railroad had been built traveling basically the same route west and greatly diminished the practically of traveling the National Road. The railroad could transport the same goods and passengers faster and cheaper. For the next fifty years the road began to deteriorate, but it did not die. The road was important to the communities along its route and was used for short travel between communities and then with the popularity of the automobile the old road would again have new life, when in 1916 Congress passed the Federal Ad Road Act designed to connect the State Highway systems in to an articulated system of interstate highways. As a result, the old National Road or Cumberland Road was designated U.S. Route 40 and was improved.

This work is licensed under a Creative Commons Attribution No Derivatives license.
Posted by Little Bits of History at 12:41 PM