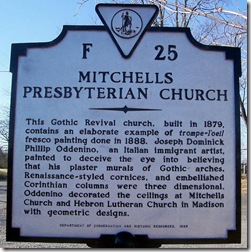 Location: About two miles, south of U.S. Route 522 (Zachary Taylor Highway), 0.28 miles east of (State Route 615) Rapidan Road on Mitchell Road in east of the church.  Another marker by the same name with number F-25a is located on U.S. Route 522 south of Culpeper about 2 miles north of the church.  Erected by the Department of Conservation and Historic Resources in 1985. 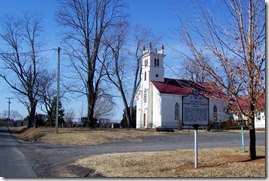 Time for another marker about a church building. Being a pastor I like historical markers related to churches, particularly Presbyterian ones. The Mitchells Presbyterian Church was built in 1879. What sets this church apart as an historical site, on two similar markers, relates to its style as a Carpenter (or Rural) Gothic church, which was a typical style for country structures during this period in the mid-19th century and due to the trompe-l'oeil fresco painting done in 1888 by Joseph Dominick Phillip Oddenino.

Structures built in the Carpenter Gothic style, such as homes and public buildings, resulted due to the changes in construction and manufacturing methods. A successful builder learned to use new manufacturing techniques, such as, using stream powered scroll saws to mass produce elaborate moldings similar to Gothic Revival style and how to build using using what was called Balloon or Chicago framing. Balloon framing replaced the labor and skill intensive method of post and beam construction. Believed to have been first introduced in Chicago sometime in the early 1830's. 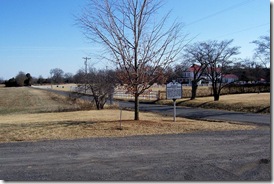 These methods helped aid the building boom following the Civil War and helped to reduce the costs of construction. Regular methods to produce Gothic Revival buildings were typically out of the price range of the average individual or organization. New techniques made it possible for people on a construction budget to exercise their whims for gothic elements in their building plans and construct larger and affordable wood frame buildings. Carpenter Gothic houses and small churches became common in North America in the late nineteenth century.

What also sets this church apart is the trompe-l'oeil fresco painting done in 1888. Trompe l'œil, is French for 'deceive the eye', it is an art technique involving extremely realistic imagery in order to create the optical illusion that the depicted objects appear in three dimensions. The Italian immigrant painter Joseph Dominick Phillip Oddenino, came to the U.S. in 1862. He was born in Chieri near Torino, Italy in 1831 as Giuseppe Domenico Felipe Oddenino. Oddenino came to America to pursue a career in art without the social limitations he experienced in Italy as his family's social status did not look kindly on lowly artists. He left his wife Celina and son Luigi to pursue his dreams. Upon his arrival in New York in March, 1862 the U.S. was in the middle of the Civil War. He enlisted in the Union Army. He served in Company B, 5th Regiment of the New York Heavy Artillery. The company saw some action in a number of engagements, but the unit spent most of its time on garrison duty, especially in the Washington, D.C. area. Civil War records indicate that Joseph, as he was known in America, was on detached duty with the regimental band on June 20, 1864.

While stationed at Fort Goons in Baltimore, Maryland, Joseph was a musician in Company B. His company went to Gettysburg between November 16-21, 1863 during the time that Abraham Lincoln gave his Gettysburg Address. Though I could not uncover any evidence of it, Joseph might have been present during Lincoln's address, but since he was a musician it is a reasonable possibility. 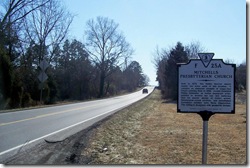 This marker in photo is the companion marker on U.S. Route 522, two miles north of the church, Marker F-25a, which points you to the church.

At the Mitchells Church, Oddenino painted the ceiling to resemble beams framing rosettes. The artwork is a shining example of the ancient art of fresco and is a curious transplant in the rural Virginia countryside. Photos of interior of the church and many copies of newspaper clippings can be found at a Joseph Oddenino web site.

The church, along with the frescoes, underwent complete restoration beginning in 1979. Several other examples of Oddenino's work remain in the region – Mitchells Presbyterian Church is one of the finest and most complete.

This work is licensed under a Creative Commons Attribution No Derivatives license.
Posted by Little Bits of History at 12:51 PM