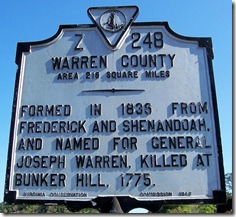 Marker Text: Formed in 1836 from Frederick and Shenandoah, and named for General Joseph Warren, killed at Bunker Hill, 1775.

Location: On Route 340, south of Front Royal going toward Luray at the Warren/Shenandoah County line. Marker is on the Page County side and next to an historic bridge and the site of a Civil War military action. Erected by the Virginia Conservation Commission in 1948. 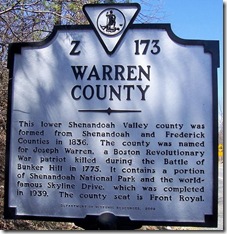 Marker Text: This lower Shenandoah Valley county was formed from Shenandoah and Frederick Counties in 1836. The county was named for Joseph Warren, a Boston Revolutionary War patriot killed during the Battle of Bunker Hill in 1775. It contains a portion of Shenandoah National Park and the world-famous Skyline Drive, which was completed in 1939. The county seat is Front Royal.

Location: On Route 522, at the county line with Rappahannock/Warren Counties between Chester Gap and Huntly. Grouped with marker J-25 (Gettysburg Campaign) Marker is on the Rappahannock side of the line. Erected by the Department of Historic Resources in 2001.

On March 9th, Warren County, Virginia will be celebrating the 175th Anniversary of their formation as a county in 1836. Throughout Virginia historical markers related to counties are found at the the county line boundaries as you enter a county. Any county might have seven or more markers about the county depending upon the number of roadways entering the county.  Many Virginia county markers were erected in the marker program's early years and have the shorter text. Some of these markers have been replaced and contain smaller, expanded text, which is why I have included, an earlier and newer version of the county marker from two different locations. 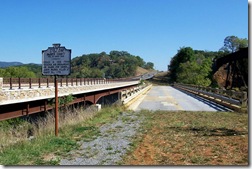 Each state deals with sharing the history of their counties in different ways. For example, Virginia and West Virginia have multiple county markers located at county lines, but states, such as, Pennsylvania and Kentucky locate a single county marker in front of the county courthouse. 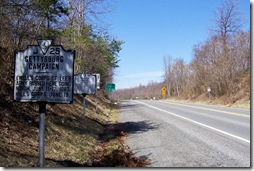 Photo is marker Z-173, on Route 522, south of Front Royal, looking north on Route 522 at Chester Gap. The Gettysburg Campaign marker indicates that Ewell’s and A.P. Hill’s Corps marched through this gap on their way to Pennsylvania.

Joseph Warren was born in Roxbury, Massachusetts in 1741 and he graduated from Harvard College in 1759. Warren engaged in the study of medicine and opened a practice in Boston in 1764. His political activities began the following year when he wrote several newspaper essays during the Stamp Act Crisis.

In 1772, Warren's prominence was recognized when he was selected to deliver the commemorative oration on the anniversary of the Boston Massacre. He worked closely with Samuel Adams on the committee of correspondence and when Adams left to attend the First Continental Congress in 1774, Warren assumed leadership of the cause in Boston. When Massachusetts legislature was suspended in 1774 following the Boston Tea Party. An extralegal Provincial Congress met in October and Warren served as president pro tem. He also chaired the Committee of Safety, whose purpose was to collect arms and train militia units. 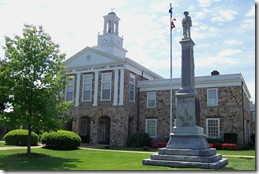 Photo is Warren Co. Courthouse in downtown Front Royal.  Fighting for the Battle of Front Royal occurred around the courthouse.

In March 1775, despite receiving threats on his life, Warren again delivered the annual speech honoring the fallen in the Boston Massacre. Old South Church was so full that Warren had to enter the building by climbing a ladder and crawling through a window behind the pulpit. His oration was well received, except by the British officers in attendance who heckled him.

Warren was instrumental in warning Paul Revere and William Dawes to British movements late on April 18, 1775, that prompted his ride to alert the countryside. Warren participated in the Battles of Lexington and Concord the next day, marking the start of the American Revolutionary War. During the British return march from Lexington and Concord, Warren exposed himself to enemy fire repeatedly in order to reach and treat the wounded.

Warren worked diligently to organize the American military effort and had been commissioned a Major General in the militia, though he never really functioned as a general. In June, after learning of the British move to Charlestown, Warren went to Bunker Hill on June 17, 1775 to offer his services as a volunteer. He fought valiantly and was one of the last Americans to leave Breed’s Hill, but was struck in the back of the head by a musket ball and died instantly. 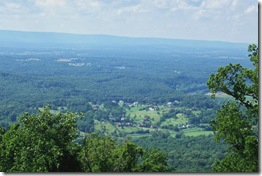 Photo is western side of Warren County taken from the Skyline Drive.  My house is about in the upper-middle of the photo, can you see it.

Fourteen states have a Warren County named after Joseph Warren as well as many towns, such as, Warren, PA, Warren, MI, Warren, NJ, Warrenton, VA, Warren, MA and twenty-nine, Warren Townships. Warren's younger brother, John served as a surgeon during the Battle of Bunker Hill and the rest of the war and then later founded the Harvard Medical School.

Warren County, Virginia offers the visitor to the county many points of interest. Front Royal is the only incorporated town in the county and is designated the canoe capital of Virginia, because the north and south forks of the Shenandoah River merge together near the town to make the Shenandoah River. During the Civil War, the Battle of Front Royal took place in the county on May 23, 1862, when Stonewall Jackson attacked the Union troops occupying the town during his Valley Campaign. Front Royal was the location of the execution of several of Col. John Mosby's Rangers in 1864. The Confederate Museum on Chester Street has many interesting artifacts from the 1860s. The Front Royal Cardinals baseball team in the Valley League, play their games in the Bing Crosby Stadium. Bing Crosby donated the land and money to build the original stadium.

Warren County has a host of tourist attractions which include Skyline Caverns, the northern entrance to Shenandoah National Park, the Skyline Drive, and the Andy Guest Shenandoah River State Park. There is also a large number of American Civil War attractions throughout the county and the surrounding Shenandoah Valley.

This work is licensed under a Creative Commons Attribution No Derivatives license.
Posted by Little Bits of History at 9:58 AM