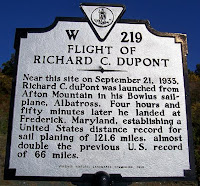 
Marker Text: Near this site on September 21, 1933, Richard C. duPont was launched from Afton Mountain in his Bowlus sailplane, Albatross. Four hours and fifty minutes later he landed at Frederick, Maryland, establishing a United States distance record for sail planing of 121.6 miles, almost double the previous U.S. Record of 66 miles.

Location: On Interstate 64 eastbound lanes, on Afton Mountain, at first scenic overlook about 1,500 feet east of the exit for Route 250 and the Skyline Drive. This marker is located next to marker W-218 (Rockfish Gap Meeting)

Erected by the Virginia Historic Landmarks Commission in 1983.

Richard Chichester duPont was a member of the prominent Delaware duPont family. Born in 1911 to Alexis F. duPont and Mary Chichester, his father was the vice-president of the E. I. du Pont de Nemours & Co. Richard developed an interest in aviation at an early age.

He started piloting gliders in 1929. By this time he had already logged some 1,000 hours as an airplane pilot. He learned skills for flying gliders through the Soaring Society of America at Elmira, N.Y. While at the University of Virginia (only about 20 miles from this marker) he founded a campus soaring club. He studied aviation in 1932 at Curtiss-Wright Technical Institute while in the same year with his sister, Alice flew a open-cockpit airplane up the Amazon River. 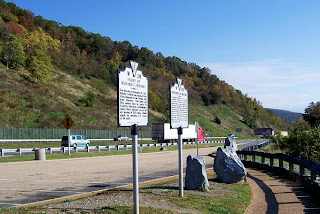 Following a soaring meet in Elmira, N.Y. Richard du Pont was discouraged by few days of favorable winds for soaring and he and others thought there had to be other soaring sites in the eastern U.S. He had been studying maps and he was certain the Shenandoah Valley of Virginia offered an ideal solution for an alternative soaring site. To test his theory Dick duPont invited other pilots to an informal meet centering at the Swannanoa Country Club near Waynesboro, atop the Blue Ridge in western Virginia. On September 20, 1933, Emerson Mehlhose of Wyandotte, Michigan took off from Rockfish Gap in a wind that nearly tore his wings off, soared up the Shenandoah Valley 71 mi. for a new U. S. distance record. (Old record: 66.7 mi., by Martin Schempp, from Elmira, N.Y..) Richard duPont on the next day started on Afton Mountain at Rockfish Gap, he passed Mehlhose's landing place, kept on soaring, crossed the Maryland line, started to head into Pennsylvania when rain and fog forced him back to Frederick, MD, a distance of 121.6 mi. — 14 mi. short of the world record. 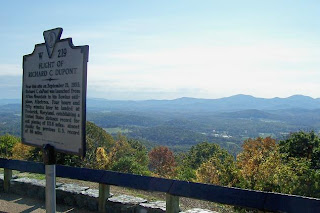 The sailplane that Richard duPont used on his record breaking flight was his Bowlus sailplane, Albatross. This sailplane was designed and built by William Hawley Bowlus who was quite well known as a sailplane designer from San Fernando, California. Mr. Bowlus was the Superintendent of Construction on Charles Lindbergh's aircraft, the Spirit of St. Louis. He also gave gliding lessons to both Charles and Anne Lindbergh. William Hawley Bowlus is probably better widely known in non-aviation circles for his key role in the design of Airstream travel trailers.

Richard with his brother, Felix established All American Aviation Company an airmail service eventually covering parts of Pennsylvania, West Virginia, Kentucky and Ohio. Six years after Richard's death, the air service began passenger service and become Allegheny Airlines, which was the precursor to today's US Airways. I remember the old Allegheny Airline planes on trips to the old Pittsburgh airport. These were the days prior to airport security where you went through the gate walked across the tarmac, up the stairs into the plane, generally all outside regardless of the weather.

During World War II, the U.S. established the American Guilder Program. Richard duPont was special assistant to General “Hap” Arnold and placed in charge of the glider program after the death of director Lewin B. Barringer. During a demonstration flight on September 11, 1943 at March Air Field in California, duPont and other passengers were killed in a MC-1 glider. William H. Bowlus who was also a passenger managed to parachute out to safety before the glider crashed.

Richard's brother, Major Felix duPont succeeded him in the glider program. This marker is in the approximate area for the start of his flight in 1933 and is close to the southern entrance to the Skyline Drive.

Both Richard C. duPont and William H. Bowlus were inducted in the Soaring Hall of Fame in Elmira, N.Y.

Posted by Little Bits of History at 9:19 AM