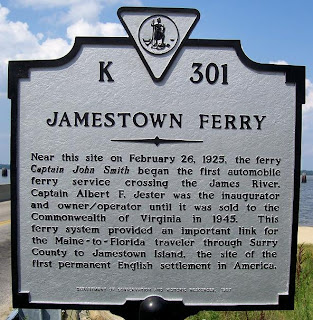 Marker Text: Near this site on February 26, 1925, the ferry Captain John Smith began the first automobile ferry service crossing the James River. Captain Albert F. Jester was the inaugurator and owner/operator until it was sold to the Commonwealth of Virginia in 1945. This ferry system provided an important link for the Maine-to-Florida traveler through Surry County to Jamestown Island, the site of the first permanent English settlement in America.


Location: On Route 31 at ferry south entry in Scotland.  Erected by the Department of Conservation and Historic Resources in 1987. 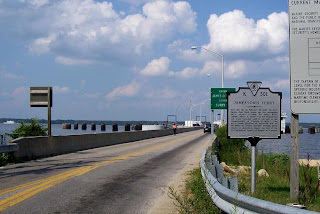 Photo (at right) taken looking at entrance to Jamestown Ferry from south side of James River in Surry County.


What I find most interesting about his marker are my early teenage memories of traveling on this ferry in the mid 1960's, it was the first time I ever rode on a ferry. The actual ferry boats have changed considerably since I traveled on them in 1960's. We were on a family vacation returning from Myrtle Beach, South Carolina and my parents were going to take my two sisters and myself to Jamestown Island and we crossed the James River on the ferry. My wife and I crossed it again in the summer of 2008, when I took these photos. 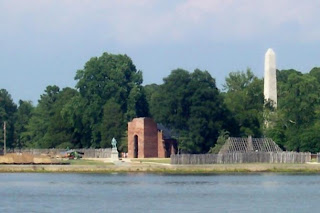 Photo on the left was taken from ferry looking at Jamestown Island.

The Jamestown Ferry is the only vehicle crossing between the James River Bridge in Newport News to the east and the Benjamin Harrison Memorial Bridge up river to the west near Hopewell. The ferry serves as the river crossing for State Route 31. The ferry connects Jamestown, James City County to the north with Scotland Wharf in Surry County to the south.

The ferry at the time I crossed operated 24 hours a day, seven days a week and was toll-free. You will need to prepare yourself for a random security screening and identity check before you drive unto the ferry, but on my visit this was no inconvenience at all and actually quite comforting to know that they take security of travelers seriously. 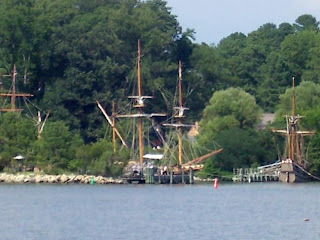 If you plan to visit Jamestown Island, a trip across the ferry particularly going north gives you a unique view of Jamestown Island from the river and the trip across takes 15 minutes giving you the opportunity to get out of your vehicle and take photos. On the Jamestown side you will be able to see replicas of Christopher Newport's three tiny ships, Susan Constant, Godspeed, and Discovery which are docked at Virginia's Jamestown Settlement attraction. Seeing these ships up close at the Jamestown settlement gives you an appreciation of just how courageous those first individuals truly were who came to the new settlement on Jamestown Island in 1607.

As you depart from the ferry on the northern shore you can easily visit Jamestown Island, Virginia's Jamestown Settlement and enter the southern end of the Colonial Parkway, which will take you to Colonial Williamsburg and Yorktown.


One might ask why there is still a ferry here and not a bridge, not that a bridge has not been considered over the years. One, of many factors considered, is the cost of building a bridge over a navigable waterway which is substantial. If built as a toll bridge the fees would probably deter its use due to the tolls needed to recover the high construction costs. Another important factor in favor of a ferry, over a bridge would be the historic impact a bridge would have in this very historic area of Virginia. Jamestown is the first permanent English Settlement in America over 400 years ago and the construction of a bridge at this location would greatly impact the historic environment of the area.
The presence of a ferry though modern at this point preserves the historic appearance of the area while reminding people that at one time ferries were the principle means for a long time in our history for crossing large rivers throughout Virginia and the other colonial states. There are numerous historic markers in Virginia, particularly along the James River, which describe these once present ferries. They remind us of the presence of long past ferries that dotted the country crossing our rivers at some time over the course of our history. It is good that the Virginia Department of Transportation (VDOT) continues to operate and maintain this ferry crossing for the enjoyment of all the travelers that come to this historic region of Virginia.

Posted by Little Bits of History at 7:39 PM