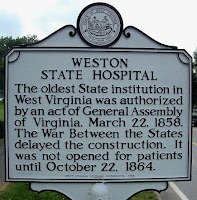 Marker Text (No. 1): The oldest State Institution in West Virginia was authorized by an act of General Assembly of Virginia, March 22, 1858. The War Between the States delayed the construction. It was not opened for patients until October 22, 1864. 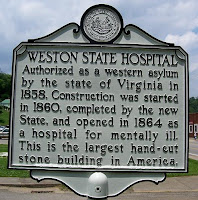 Marker Text (No. 2): Authorized as a western asylum by the state of Virginia in 1858. Construction was started in 1860, completed by the new State, and opened in 1864 as a hospital for mentally ill. This is the largest hand-cut stone building in America.

Location: US 33 and US 119, going SW out of Weston on east corner of hospital lot. 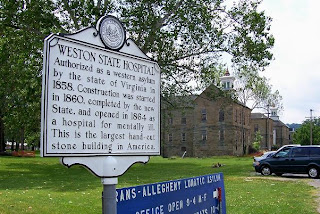 Today's entry deals with two markers about the same subject, Weston State Hospital in Weston, West Virginia. These two markers are on opposite corners on Route 33/119 next to the old hospital. I ran across these markers and the old hospital by accident one day while traveling through Weston looking for another marker.

Before I knew anything about this old state mental hospital, I found that standing next to it to take these photos was a creepy and disturbing experience. Later, when I heard that the old building may be haunted, I did not find that assumption to be unrealistic.

Prior to the American Civil War, there were two institutions in Virginia to treat mental illness. Overcrowded facilities at Williamsburg and Staunton often meant that those in need of treatment were confined in jails. Western Virginia politicians demanded a new facility be built west of the Allegheny Mountains. Virginia had never funded a public institution in present-day West Virginia, a point of contention among those who leaned toward forming a new state. To appease western leaders, the Virginia General Assembly authorized the establishment of the Trans-Allegheny Lunatic Asylum in 1858, although funds were not appropriated until January 6, 1860. The Civil War delayed construction and the facility finally opened in October 1864 as the West Virginia Hospital for the Insane, later renamed Weston State Hospital. 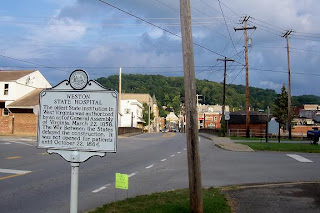 Weston State Hospital was constructed between 1858 and 1881, is believed to be the largest hand-cut stone masonry building in North America, and is purportedly the second largest in the world, next to the Kremlin. The main building is massive, built of sandstone blocks in its exterior walls and was designed by Richard Snowden Andrews, a Baltimore architect whose commissions included the custom house in Baltimore, the governor’s mansion in Annapolis, and the south wing of the U.S. Treasury building in Washington, D.C. The building measures nearly 1,300 feet and the center unit is four stories high with a great cupola and clock tower. This center section originally was intended for business offices and personnel and even at one time had a large ballroom. 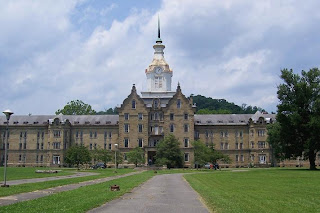 The state closed the facility in 1994 and it sat empty for many years. It was designated for demolition when it was purchased by private individuals who wished to preserve the building. They chose to maintain the original name for the facility, “The Trans-Allegheny Lunatic Asylum”.

Ghost Hunters from the SyFy Channel have visited the Weston Hospital and conducted investigations regarding the hospital being haunted. The episode which covered their visit is from Season 4 and is called, “Haunted Asylum.” A short overview of the investigation can be found on their web site. If you fancy yourself an amateur ghost hunter, it is my understanding that you can arrange to spend the night at the hospital to conduct your own investigation. 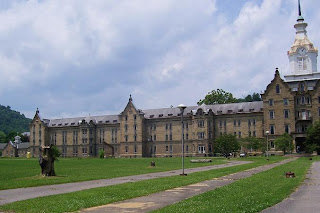 By the 1960s, these institutions had become overcrowded and underfunded, West Virginia like many states developed community-based mental health programs. People formerly committed to state hospitals could now receive services in their own communities. As local services expanded, state institutions downsized or closed. Weston State Hospital closed in 1994 and was replaced by a much smaller facility named for State Senator William R. Sharpe, Jr. I had the opportunity to meet State Senator Sharpe in 2003 and then again in 2005 when he introduced me to the WV State Senate, when I was invited to give the opening prayer for the first day of the legislative session by Senate President Earl Ray Tomblin.

Posted by Little Bits of History at 4:21 PM