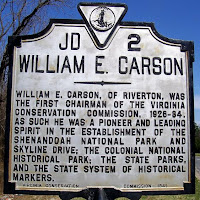 Marker Text: William E. Carson, of Riverton, was the first chairman of the Virginia Conservation Commission, 1926-34. As such he was a pioneer and leading spirit in the establishment of the Shenandoah National Park and Skyline Drive; the Colonial National Historical Park; the state parks, and the state system of historical markers.

Location: On Route 340 in the southbound lane, south of Front Royal just south of the northern entrance to the Skyline Drive, Shenandoah National Park.  Erected by the Virginia Conservation Commission in 1941.

When discussing the topic of historic road markers, specifically in Virginia, it seems appropriate to have a road marker about the person of William E. Carson. Carson was the principal state official to bring about the creation of the state system of historical road markers, that dot the countryside in Virginia. This was one among his many accomplishments.
William Carson was a native of Ireland born on October 8, 1870. His parents moved to Riverton, Virginia which is located just north of Front Royal, Virginia along the north and south forks of the Shenandoah River. His father, Samuel would establish the Riverton Lime and Stone Company, which William Carson would eventually take over from his father. 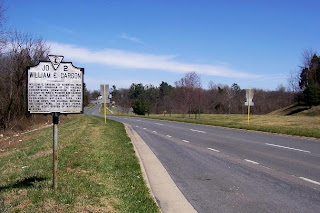 Photo (on left) taken looking north on Route 340 toward Front Royal, entrance to Skyline Drive is in the background to the right in the northbound lane of the highway.

He entered the area of politics in 1910 and served for thirty years as chairman of Virginia's Seventh Congressional District's Democratic Committee. In 1925, he successfully managed the election of Harry Flood Byrd as Virginia's governor. Governor Byrd appointed Carson as chairman of the newly created Virginia Conservation and Development Commission. He held this position from 1926 to 1934.

During this time Carson made major contributions within Virginia that endure today. From accounts, I have read, he did all this work as chairman without collecting any salary.
When he died in 1942, the Richmond Times-Dispatch wrote:

“It can truly be said that no man now living has done more for this State, or has labored more unselfishly, or has left a deeper and more lasting impression upon the public life of Virginia during his time, than this quiet and forceful business man who was called from the relative obscurity of his private interests to serve the State in a capacity fraught with difficulties and demanding the high qualities of genius and statesmanship.  How well that task was performed is now a matter of history.”

During and prior to these years as chairman of the Conservation and Development Commission, Carson was a leading advocate of establishing a national park along the Blue Ridge mountains of Virginia, which today is the Shenandoah National Park containing the Skyline Drive. He assisted in getting Congress in May, 1926 to authorize the creation of the park, though state and private funds would be needed to buy the land before the federal government would take over the newly created park. The creation of the park was no easy task and for eight years Carson showed considerable political skills in adapting to the changing economic situation, in order to make the park a reality.
Carson believed that the best way to win support for the Shenandoah National Park was to persuade the U.S. president that the area’s scenery and rustic beauty made it an ideal site for a presidential retreat.  Carson had lobbied Calvin Coolidge on situating a camp in the park, but to no avail.  Herbert Hoover, an avid fisherman, expressed interest in the idea, after Carson told Hoover of the excellent trout fishing in the area. Hoover chose the site for his camp, which can still be seen today by those visiting the park. Hoover's involvement served to revive interest in building a road through the park, a “skyline drive” which the Southern Appalachian Mountains Commission had envisioned in 1924 when it recommended the Blue Ridge for the national park. In 1930, Hoover backed a bill which allowed for the use of drought relief funds to build the first twelve-mile stretch of Skyline Drive.
In this role as chairman of the Virginia Conservation and Development Commission, he influenced many state projects, such as, establishing the state park system, establishing the Colonial National Historic Monument linking Yorktown, Williamsburg, and Jamestown, which included the Colonial Parkway. He reorganized the state forestry and geological departments and helped form the Virginia State Historical Department; and, of course, he helped to develop the Virginia system of highway historical markers of which many of these markers from this period (1926-1934), still can be found along Virginia's roadways. This marker was erected and installed one year prior to Carson's death in 1942, which is unusual for a marker to be erected for a living person.

Posted by Little Bits of History at 9:09 AM