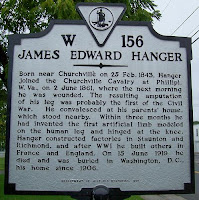 
Marker Text: Born near Churchville on 25 Feb. 1843, Hanger joined the Churchville Cavalry at Phillipi, W.Va., on 2 June 1861, where the next morning he was wounded. The resulting amputation of his leg was probably the first of the Civil War. He convalesced at his parents' house, which stood nearby. Within three months he had invented the first artificial limb modeled on the human leg and hinged at the knee. Hanger constructed factories in Staunton and Richmond, and after WWI he built others in France and England. On 15 June 1919 he died and was buried in Washington, D.C., his home since 1906.

Location: On Route 250 at Route 42 south, Churchville across from the Fire Station. Erected by the Department of Historic Resources in 1996.

As you travel the roads of the U.S., I have encountered a wide range of significant events covered by historical road markers. Among some of my favorites are the ones, which cover specific individuals, due to the interesting and amazing historical information that we can discover in these individuals lives. 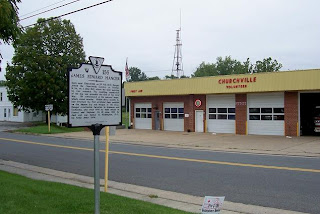 The marker in Churchville, VA on James Edward Hanger is one of these markers. Hanger was only 18 years old when he wanted to volunteer in the Grand Army of the Republic in 1861 at the beginning of the American Civil War. He probably had one of the shortest military careers of anyone, but definitely not one that was lacking in significance for himself and countless veterans of many conflicts since.
At dawn on June 2, 1861, he woke suddenly to the sound of gunfire. Hanger jumped from a hayloft to grab his horse, but he never left town. In the skirmish, he was severely wounded by a cannonball. After being found by Union troops, surgeons amputated one of his legs above the knee, making Hanger probably the first amputee of the Civil War. He returned to Churchville to the home of his parents traumatized and took to his room, spending hours whittling and working with barrel staves and scraps of wood. Three months later, he walked down the stairs on an artificial leg that hinged at the knee to the surprise of his family.
The invention of the first hinged artificial leg not only made Hanger's life easier, it eventually made him rich. He made "Hanger limbs" for other area amputees, and the Virginia state legislature commissioned him to make artificial limbs called the “Hanger Limb” for wounded veterans. His patent led to a thriving business. When he died in 1919, Hanger Company had branches in London, Paris, Philadelphia, Pittsburgh, Atlanta, and Saint Louis.
Hanger Orthopedic is now traded on the New York Stock Exchange and has more than 1,000 employees in forty-three states.

Posted by Little Bits of History at 11:00 AM