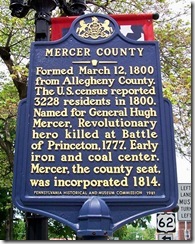 Location: On the northside of the Mercer County Courthouse, at Courthouse Square, Mercer, PA.  Erected by the Pennsylvania Historical and Museum Commission in 1981. 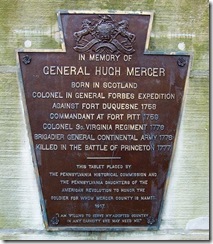 “I am willing to serve my adopted country
in any capacity she may need me.” 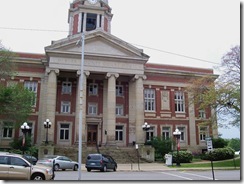 Location: In front of courthouse, north side entrance, Mercer, attached to the column on the side of the stairs leading to the entrance to courthouse.  Dedicated: 1917

I grew up in Mercer County, Pennsylvania and must say I knew little about how Mercer County got it's name and even less about General Hugh Mercer for whom it was named. A few years ago some friends from Mercer County where stopped and ticketed for speeding in West Virginia. They asked the state trooper what they needed to do to pay the fine. The trooper said they could send it to the Mercer County Courthouse, they thought that was nice that they could take care of it at home, without realizing they were in Mercer County, West Virginia. What my friends did not realize is that seven counties are named for Hugh Mercer in New Jersey, Pennsylvania, Ohio, Kentucky, Illinois, West Virginia and Missouri, as well as a few towns and schools. Many counties and towns throughout the U.S. are named for prominent individuals from the American Revolution. 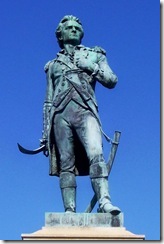 Hugh Mercer was born on January 17, 1726 into a family of Presbyterian ministers in the lowlands of Scotland near Aberdeen. He received a rigorous classical education and in 1744, he earned a master's degree and was in training to become a surgeon.

Graduating as a doctor, he practiced locally until the arrival of Prince Charles Edward Stuart and the beginning of the 1745 Jacobite Rebellion. Rallying to the Prince's colors, Mercer became an assistant surgeon in the Jacobite Army. He remained in this service until the Prince was defeated by the Duke of Cumberland at the Battle of Culloden on April 16, 1746.

Branded a rebel in the wake of Culloden, Mercer was forced to flee Scotland for America in 1747. Arriving in Philadelphia, he settled on the Pennsylvania frontier practicing medicine. After living in Pennsylvania for eight years, Mercer entered the military by aiding the survivors of General Edward Braddock's campaign against Fort Duquesne. Mercer was later commissioned as a captain in a Pennsylvania regiment engaged in fighting against the Shawnee and Delaware Indians, Mercer and his men took part in Lt. Colonel John Armstrong's raid on Kittanning, PA on September 8, 1756.

During the raid on Kittanning, Mercer was badly wounded in his right arm and separated from his men. He made it alone on foot 100 miles to Fort Shirley where he received medical attention. Declared a hero, he was given a silver medal by the City of Philadelphia for his part in the raid. Over the next four years, Mercer rose through the ranks, finishing the French & Indian War as a colonel. He befriended many of the officers from the Virginia regiments, including George Washington. 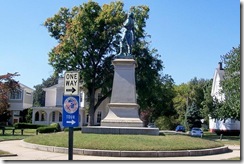 In 1760, Mercer took up residence in Fredericksburg where a vibrant and friendly Scottish community existed and returned to practicing medicine. While in Fredericksburg, Mercer married Isabella Gordon, the daughter of a local tavern owner. The couple would have five children, one of which married into the Patton family. This line would ultimately produce World War II hero General George S. Patton. After 15 years of civilian life in Fredericksburg as a doctor, Mercer resumed his military career in the Virginia regiments created in 1775. On January 11, 1776, Mercer was appointed colonel of the 3rd Virginia Regiment and marched north to join Washington's army, Mercer's officers included future president James Monroe and future Chief Justice John Marshall. In June 1776, Mercer was promoted to brigadier general by the Continental Congress

His service in the War for Independence was brief but heroic. He won high praise from Gen. George Washington, who utilized him in an important and much-needed victory at Trenton in December 1776. Washington's army slipped away from Trenton with the goal of striking at Cornwallis' rear and capturing Princeton. On January 3, with Mercer's brigade leading one wing of the army's advance, Mercer was the first to encounter British resistance.

Surrounded by the British, Mercer was mistaken for Washington, he was ordered to surrender. Refusing to do so, he drew his sword and charged at the British troops. In the resulting melee, he was severely beaten with musket butts and run through with bayonets. Leaving him for dead, the British continued the battle. Seeing Mercer's men falling back, Washington brought reinforcements to the scene and was able to drive the British from Princeton. Found after the battle, Mercer was taken to the Thomas Clarke House for treatment. Though attended to by the famed patriot Dr. Benjamin Rush, his condition did not improve and he died nine days later on January 12, 1777. His death was mourned by thousands in Philadelphia, for he had been a Pennsylvanian and a hero in the earlier war before he came to Fredericksburg. 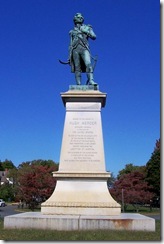 His body was transported to Philadelphia where it was interred in the Christ Church Burial Ground in Philadelphia, he was re-buried in the newly-opened Laurel Hill Cemetery in 1840 and placed under a new memorial. Later that year, one of the key forts on the Delaware River was named in his honor. It was successfully defended during the Battle of Red Bank (October 22, 1777), but was abandoned the following month after the fall of Fort Mifflin across the river. The house where he died now stands on the Princeton Battlefield, and is a National Landmark. A street named for him in Fredericksburg is near the National Civil War Battlefield.

A statue erected by Congress (pictured above) to honor Mercer stands outside Kenmore Mansion at the intersection of Washington Avenue and Fauquier Street, in the median on Washington Avenue in Fredericksburg, Virginia.

Posted by Little Bits of History at 11:12 AM