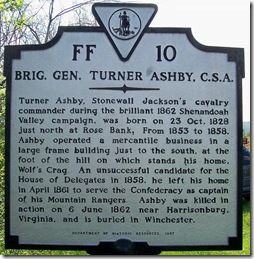 Marker Text: Turner Ashby, Stonewall Jackson's cavalry commander during the brilliant 1862 Shenandoah Valley campaign, was born on 23 Oct. 1828 just north at Rose Bank. From 1853 to 1858, Ashby operated a mercantile business in a large frame building just to the south, at the foot of the hill on which stands his home, Wolf's Crag. An unsuccessful candidate for the House of Delegates in 1858, he left his home in April 1861 to serve the Confederacy as captain of his Mountain Rangers. Ashby was killed in action on 6 June 1862 near Harrisonburg, Virginia, and is buried in Winchester. 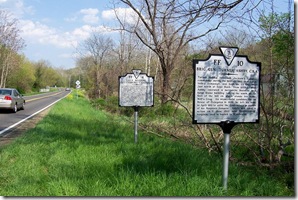 As Confederate General Thomas “Stonewall” Jackson's Valley Campaign continued into June, 1862 in the Shenandoah Valley an important officer in his successful campaign was Brig. Gen. Turner Ashby, C.S.A. Though Ashby was an officer caused Jackson some problems and Ashby made some errors hurting Jackson's effort. Today's marker tells the traveler that near this location Turner Ashby was born.

Born October 23, 1828, at Rose Bank, near Markham in upper Fauquier County, Virginia. His father, also named Turner Ashby, had fought as a colonel in the War of 1812, and his grandfather served as a captain during the American Revolutionary War. At early age Turner Ashby demonstrated his horsemanship talents by winning top prizes at jousting tournaments. In his mid-twenties, Ashby organized his friends into a cavalry company. The group was known as the Mountain Rangers. Their purpose was to protect his neighborhood from roughnecks accompanying the construction crews of the Manassas Gap Railroad. Following John Brown’s raid at Harpers Ferry in mid-October 1859, Ashby’s company mustered into the Virginia militia to perform guard and picket duty at Charles Town during the Brown trial and execution.

Sixteen months after Brown’s execution, when the Civil War began, Ashby figured prominently in the plot to capture the Harpers Ferry arms factory and weapons’ warehouses. After Virginia's seceded from the Union on April 17, 1861, Ashby's men attempted to capture the arsenal at Harpers Ferry, but due to the need to wait for reinforcements the arsenal's supply of fifteen thousand small arms were destroyed by vigilant U.S. regulars. 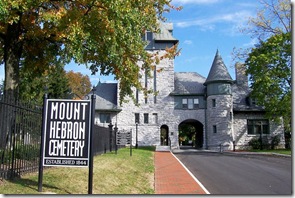 After the Civil War Turner Ashby’s body was reinterred in the Stonewall Cemetery within the Mount Hebron Cemetery in Winchester, VA.  This is the main entrance to cemetery.

While serving at Harpers Ferry during the spring of 1861, Ashby came under command of Colonel Thomas J. “Stonewall” Jackson. Jackson assigned Ashby to guard Potomac River fords and bridges from Harpers Ferry to Point of Rocks, Maryland. While in this capacity, Ashby’s command assisted Maryland men across the river to join the Confederacy and interrupted Baltimore and Ohio Railroad traffic and the passage of boats on the Chesapeake and Ohio Canal.

During the summer and early fall of 1861, then Colonel Ashby’s mission was to protect the border counties of the lower Shenandoah Valley and to systematically destroy the B&O Railroad between Martinsburg and Harpers Ferry. Ashby suffered a personal loss when his brother, Richard, was killed during engagement with a Union patrol along the Potomac in June, 1861.

On July 23, 1861, Brigadier General Joseph E. Johnston appointed Ashby lieutenant colonel of the 7th Virginia Cavalry. By February, 1862 Ashby became a Colonel because of the retirement of the regimental commander due to illness. Ashby organized the first Confederate horse artillery, named Chew's Battery, as part of his regiment. His Regiment did not participate directly in the first battle of Bull Run, but screened the movement of Joseph E. Johnston's army to the Manassas area. 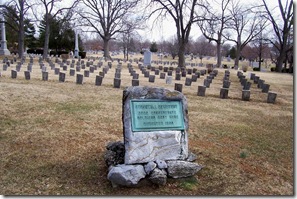 Marker for the Stonewall Cemetery with Mount Hebron Cemetery in Winchester.  Ashby’s grave is to the left out of the frame.

In the spring of 1862, the 7th Virginia had reach the enormous size of 27 infantry and cavalry companies, much larger than a typical Civil War regiment. Stonewall Jackson, in overall command of the Valley, tried to correct the situation by stripping Ashby of his cavalry forces, ordering them to be assigned to two infantry brigades. Ashby threatened to resign in protest and Jackson back down.

Jackson resisted Ashby's efforts to obtain a promotion to brigadier general due to his lack of discipline and formal military training. Nevertheless, his promotion came through on May 23, 1862, although it was not permanently confirmed by the Confederate government before he died in June.

Although Ashby failed Jackson’s discipline tests, the cavalry commander’s incessant scouting and screening missions accounted for much of Stonewall’s stealth and success during the cross-country movements of the Shenandoah Valley campaign. Yet on two occasions Ashby blundered. The first occurred at Kernstown, when Ashby misinformed Jackson, reporting that a retreating Union column consisted of only four companies of infantry. Jackson subsequently attacked on March 23, and when he encountered James Shields’ entire division of nine thousand men, Stonewall was forced to retreat in his only defeat of the War.

Ashby’s second failure occurred following the defeat of Nathaniel P. Banks at Winchester on May, 25. As the routed Federals fled north toward the Potomac, Ashby failed to cut off the Union retreat, primarily because his companies were scattered and many of his troopers were plundering captured wagons.

Ashby's life and military service would end on June 6, 1862 in Harrisonburg, VA, which is tomorrow's marker.

This work is licensed under a Creative Commons Attribution No Derivatives license.
Posted by Little Bits of History at 8:39 PM