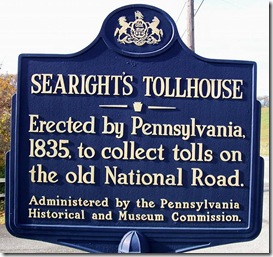 Marker Text: Erected by Pennsylvania, in 1835, to collect tolls on the National Road.
Administered by the Pennsylvania Historical and Museum Commission. 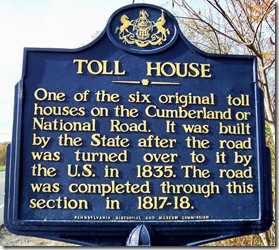 Marker Text: One of the six original toll houses on the Cumberland or National Road. It was built by the State after the road was turned over to it by the U.S. in 1835. The road was completed through this section in 1817-18.

Location: On the U.S. Route 40 (National Road), near Dearth/Canistra Roads, five miles northwest of Uniontown, PA. Erected by the Pennsylvania Historical and Museum Commission in 1947.

Today's post is covers two related markers referring to the same old toll house on the old National Pike or Road. The two markers are only about 150 yards from each other. I wonder why the standard state historical marker is not located at the site of the toll house rather than further south. 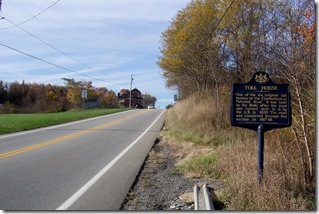 State marker is east of the toll house which can be seen in the distance on the left.  Photo taken looking west on U.S. Route 40.  Click any photo to enlarge.

I have taken photos of three existing toll houses on the old National Road. Each toll house is similar in design, but each made from different materials, one in Maryland (which I posted earlier) is wood frame structure. Another in Petersburg, PA (Addison) is made with hand cut limestone. Today's toll house is build of brick. Older photos of Searight's Tollhouse can be found at this link.

Searight's Tollhouse received its name from its location near the village of Searights, named for its most prominent citizen, William Searight. Searight was one of the wealthiest men in the region of Fayette County, PA during the first half of the nineteenth century. Searight used his political connections to land the position of Commissioner of the Cumberland Road (National Road) for the state of Pennsylvania in 1842.

As commissioner, Searight was responsible for all operations, from lower level job or patronage appointments to overseeing toll collection along the roadway. This position helped increase Searight's power within the southwestern portion of the state, and also rewarded him financially. He was paid $730 a year for carrying out his duties, a significant wage for the era. In addition to his position as commissioner, Searight also operated a popular tavern along the National Road. 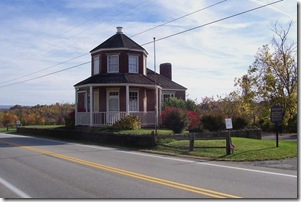 Toll house on south side of U.S. Route 40, first marker is on the right of photo.

Searight continued to serve as Pennsylvania Commissioner of the Cumberland Road until April 1845 when a federally directed reorganization of the management structure eliminated his position.

Searight's Tollhouse, constructed when the Commonwealth took control of the road in 1835, stood on the highway itself with a long, hinged gate to block all traffic until the appropriate tolls had been paid. It joined other tollgates in Pennsylvania located near Petersburg, Mt. Washington, Beallsville, Washington, and West Alexander. Searight's is only one of two remaining toll houses along the old National Road in Pennsylvania.

The National Road (or Cumberland Road) was authorized by the federal government in 1806, in response to the need to connect East and West by a national transportation system. The section which crossed Pennsylvania began in Cumberland, Maryland - thus earning the title of the "Cumberland Road" and ended in Wheeling, WV in what was then Virginia. 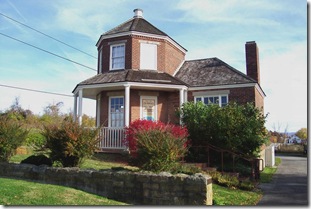 The National Road was unique in U.S. history for the fact it remains the only road system entirely constructed by the Federal Government. Construction between Uniontown and Washington, PA took five years due to the mountain region and wilderness nature of building the road in this area of Pennsylvania and cost $6,400 a mile.

By the early 1830's, the cost and difficulty in maintaining the road made the federal government anxious to hand the financial responsibility over the individual states which the road passed through. In 1835 Pennsylvania agreed to administer the PA portion of the road and authorized the erection of six tollhouses, approximately fifteen miles apart, to aid in the collection of the necessary revenue. 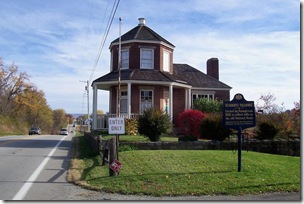 In the years following the construction of the Tollhouses saw a never ending stream of traffic, both east and west. With the coming of the railroads to Western Pennsylvania in the 1850's, traffic over the road gradually declined and after the U.S. Civil War the road was chiefly used for local trips. Tolls were collected until 1905. Without tolls to support road maintenance the road fell into disrepair until the arrival of the automobile in the early twentieth century. The automobile increased individuals interest in seeing the country and made personal travel easier. This interest helped resurrect the use of the old National Road and by the 1920's the National Road was reincarnated as U.S. Route 40.

This work is licensed under a Creative Commons Attribution No Derivatives license.
Posted by Little Bits of History at 5:02 PM