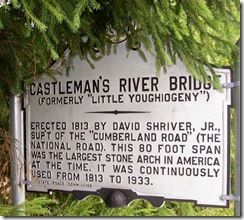 Marker Text: Erected 1813 by David Shriver, Jr., Sup't of the "Cumberland Road" (The National Road). This 80 foot span was the largest stone arch in America at the time. It was continuously used from 1813 to 1933.

Location: Marker is east of Grantsville, Maryland, in Garrett County. Marker is on Casselman Road near The National Pike (U.S. 40). Casselman Road was the original alignment of the National Road leading to the bridge. It stops at the east end of the bridge where the marker can be found. Erected by State Roads Commission. Marker has different text on each side, title and text for reverse side is as follows:  (There is an identical marker on the other end of the bridge.) 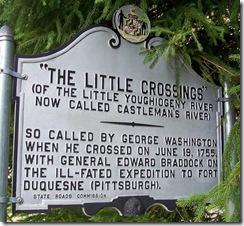 Marker Text: The "Little Crossings" of the Little Youghiogeny River, now called Castleman's River). So called by George Washington when he crossed on June 19, 1755, with General Edward Braddock on the ill-fated expedition to Fort Duquesne (Pittsburgh).

During my travels I have come across bridges similar to this bridge and until I started to look for them did I realize how many of these old bridges exist throughout the U.S. Most of these bridges are no longer used and therefore are historic relics of our past that lie off the main roads many overgrown and forgotten near the newer bridges that replaced them. When the leaves are off the trees you can see this bridge from Interstate 68 when you drive on the east side of Grantsville, MD. I have seen it while traveling in the west bound lane of the interstate, of course, it is easily seen from Alternate U.S. Route 40. 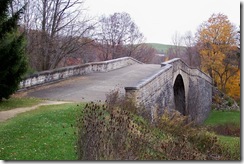 Among the oldest surviving bridges in the country is this magnificent stone arch bridge that is so old that it was built during the the time of the War of 1812! At the time of its construction it was a monumental engineering achievement for the United States and it was the largest single span stone bridge in the country. Spanning the Castleman River Bridge (also spelled Casselman) was built in 1813 as part of the National Road, which encompasses most of the current U.S. Route 40. The National Road was the Federal Government's first experiment in public highway construction. Congress authorized the road's construction in 1806 and by 1818 the road stretched from Cumberland, Maryland, to the Ohio River in what is today West Virginia. 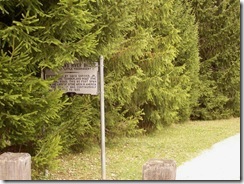 The bridge was built of ashlar stone laid irregularly, spans some 354 feet. It is approximately 30 feet high, at the chord of the arc to the waterline below, while its width at the entrances to the bridge it is about 48 feet.

In 1911 the bridge was repaired but today remains essentially unchanged from the time of its construction. The old National Road has been taken over by U.S. Route 40 and in actuality no longer exists, except that Route 40 primarily follows the same route. There is however traces of the old National Road on either side of the entrances to Castleman Bridge. The area surrounding the bridge is now a public park and picnic area. 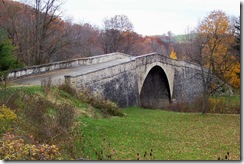 The Castleman Bridge, like the National Road continued to serve the traveler for many years after Maryland assumed control of the state's section of the highway. The bridge remained in use until 1933, when the state replaced it with a concrete and steel structure. In 1964, the Department of the Interior designated this bridge a Registered National Historic Landmark. 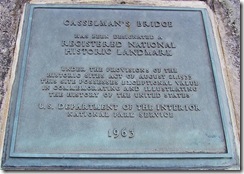 This river crossing location was also called “Little Crossings” and is said to have been a camp site of Colonel Dunbar's brigade during the Braddock campaign of 1755. George Washington crossed the Casselman River here giving it the “Little Crossings” in 1755 with General Braddock's British troops. Braddock's march helped establish what was to be called Braddock's Road. Most of the route of Braddock's road was used as the route of the National Road years later. Additional photo of the Casselman Bridge can be found at the Historic Bridges web site.

Posted by Little Bits of History at 1:55 PM